1979 Premiership hero, and Hall of Famer 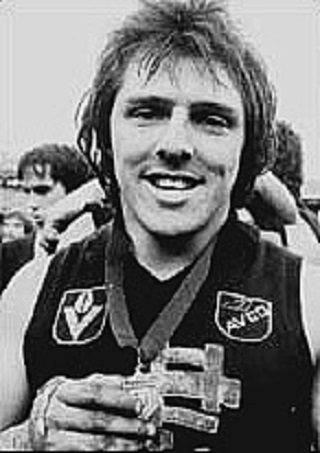 In the tradition of his predecessors Fred Stafford and Ted Hopkins, Wayne Harmes will forever be remembered for an inspirational passage of play in Carlton’s 1979 Grand Final victory over Collingwood. On that cold and wet Saturday afternoon before 112,000 fans at the MCG, the Blues led by 19 points when the final quarter began and the Magpies launched a spirited resurgence. In 20 minutes of hard, energy-sapping football, Collingwood clawed their way to within a kick of the Blues approaching time-on, and were threatening to snatch victory.

Enter Wayne Harmes – Carlton’s dynamic back pocket, who had been switched into the midfield as Carlton’s lead diminished. Gathering the ball at half-forward, Wayne went for a long kick - only to see the ball slew off his boot and skid toward the boundary in Carlton’s right forward pocket. Instantly, he wheeled and chased, then dived as the ball seemed certain to roll over the line. With a desperate round-arm swipe, he knocked the Sherrin 20 metres across to the goal square, where rover Ken Sheldon gleefully goaled to win another flag for the Navy Blues.

That moment capped a fabulous day for Harmes. Judged Best on Ground, he was awarded the inaugural Norm Smith Medal, which incidentally had been founded in honour of his own great-uncle, the legendary Melbourne coach. Fearless, tough and a superb big-match performer, Harmes was born to play League football. As a youngster, he had often carried his grandfather Len Smith’s famous Gladstone bag into training and match days at Fitzroy and Richmond, where his burning desire to play League football was stoked. In 1975, he was aged just 15 when he was invited to join Carlton’s Under 19 squad from his junior club Oak Park, after originally playing for Batman.

Harmes’ potential became clear in 1976, when he was voted Under-19 Best and Fairest and finished third in the competition’s top honour, the Morrish Medal. During that season’s final series, he won the Sun newspaper’s Sunkick competition, averaging a remarkable 69 metres with each of his kicks on his preferred right foot. Promoted to the Reserves side in 1977, he soon had the Carlton Match Committee smiling and it was only a matter of time before he was called into the Blues’ senior side. Although only 177 cm tall, Harmes’ barrel chest and solid legs saw him tip the scales at 85 kg. He was deceptively quick for his build, an often spectacular high mark because of his remarkable spring, and he loved bursting through packs to set up play at both ends of the ground.

In round 18, 1977 – a few weeks after his seventeenth birthday - Wayne made his senior debut in guernsey number 54 against Melbourne at VFL Park. He didn’t get much of an opportunity to strut his stuff, because Carlton dominated the contest from the opening bounce to win by 67 points, and Harmes sat on the bench until very late. However, busier days weren’t far away. 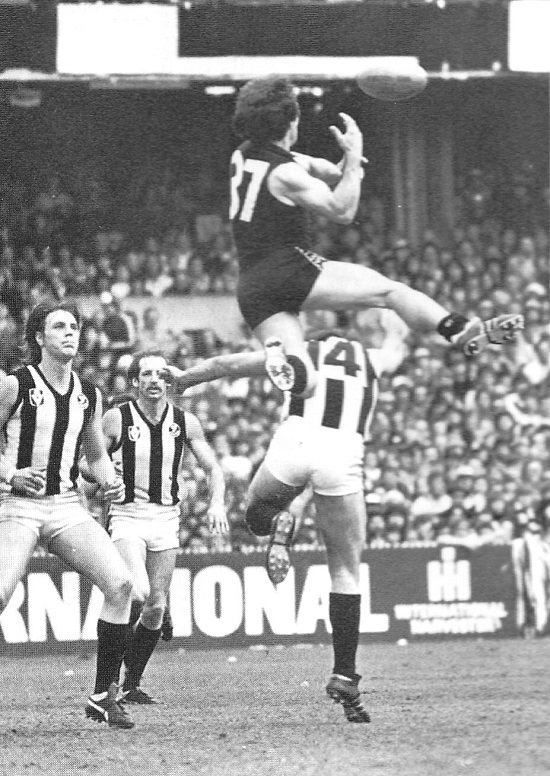 In 1978, Wayne switched to number 37 and played his first full game against Richmond in round one, when he was selected on a wing alongside Barry Armstrong and Ray Byrne. Carlton was pulverised on that hectic afternoon, and although Harmes kicked his first career goal, the Blues went down by 77 points in a record score by the Tigers. Seven days later things got worse when Geelong beat the Blues at Princes Park, but Carlton fans were thrilled when the bustling teenager – in just his third senior game – was sent into the centre by his coach Ian Stewart to play on Cats’ star David Clarke. Showing remarkable maturity and a hunger for the football, Wayne racked up 28 disposals and 9 marks to be clearly Best on Ground.

In September of that year, Harmes played his first finals match when Carlton and Geelong met again in the Elimination Final at VFL Park. Wayne had settled into a back pocket by then, combining creatively with star full-back Geoff Southby. This time, the Blues came out on top, only to lose the following weekend’s Semi Final to Collingwood and bow out of contention.

By 1979, Harmes was a rising star of the VFL competition. In a stellar year, he didn’t miss a match for the Blues, and his Grand Final heroics made him a household name. After finishing second to his captain Mike Fitzpatrick in voting for Carlton’s Best and Fairest, Wayne was selected to represent Victoria in the October State of Origin Carnival in Perth. However, during the first few minutes of the Vics’ opening match against South Australia, he was kneed in the back in a marking contest and suffered a chipped vertebrae in his spine. Idle for 12 weeks as a consequence, he was a late starter in 1980 and played only 11 matches over the season.

Injury again delayed Harmes’ progress in 1981, but as Carlton gained momentum under their new coach David Parkin, Wayne tuned up for the finals by kicking four goals from the centre against North Melbourne in round 21 at Waverley. A month later, Harmes collected his second Premiership medal when the Blues continued Collingwood’s September misery, beating their traditional rivals by 20 points in yet another hard-fought Grand Final. On a half-back flank, Harmes was a solid performer in a watertight defence led by champions Southby and Bruce Doull. Then came 1982, and Carlton’s third flag in four years. This time it was Richmond who were vanquished in a record-breaking Grand Final by a gutsy Blues outfit playing their fourth cut-throat final in as many weeks. Harmes started on a wing, and was then given the role in defence against Kevin Bartlett, and was among Carlton’s stars in a glorious victory against the odds.

In round 15, 1983, Wayne brought up his 100-game milestone when Carlton suffered a shock loss to Melbourne at Princes Park, although by then his style of play had begun manifesting itself in a string of soft tissue injuries. Always wary of his weight, he found it difficult to stay in peak shape with the enforced layoffs, leading to a tapering off of his performances in 1984 and ’85. However, realising that his career was in danger of fizzling out, Harmes attacked his pre-season training in 1986 with renewed endeavour, and it paid off. By May of that year, his form was so good that the Victorian state selectors didn’t hesitate to call him into the team for matches against South Australia and Western Australia. In September, he was included in the VFL Coaches Association’s Team of the Year, before Carlton battled through to another Grand Final – only to be outclassed by one of the great Hawthorn sides. Stationed deep in defence for most of that afternoon, Harmes battled hard to collect 17 disposals and 4 marks as the Blues were demolished by 42 points.

That was to be Wayne’s fourth and last Grand Final appearance, because the ever-increasing physical demands of elite level football took their toll in 1987 and he didn’t play a senior game. Instead, despite a persistent groin strain that prevented him from stringing a run of games together, he lent his leadership skills to Carlton’s Reserves team as vice-captain to Jim Buckley - guiding the Blues’ youngsters to an upset Grand Final victory over St Kilda.

Back close to full fitness in 1988, Harmes played six of the first nine games before his groin problem flared again. He soldiered on and came off the bench for a brief run when Carlton thrashed Richmond at Princes Park in round 17, before accepting medical advice and announcing his retirement from the VFL. He wasn’t finished altogether however, and in 1989 he signed to play at VFA club Brunswick with his Premiership team-mate Warren 'Wow' Jones. From then on, over the next 20 seasons he played and coached at a long list of suburban and country clubs, including Oak Park, Kilmore, Airport West, Thierry-Penola, Old Scotch and Templestowe.

Fondly remembered as a loyal, committed clubman, Wayne Victor Harmes was elected to the Carlton Hall of Fame in 2000.

As well as number 54, Harmes also wore nos. 39 and 50 while playing Reserve grade football for Carlton in 1976. 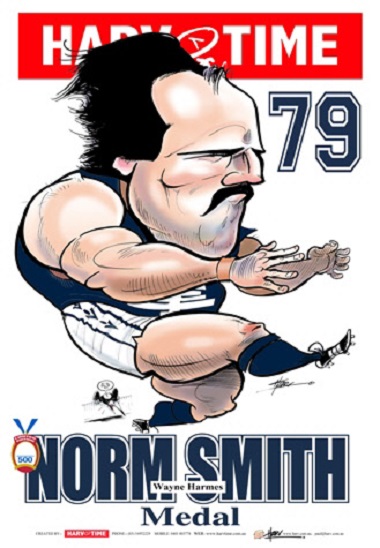