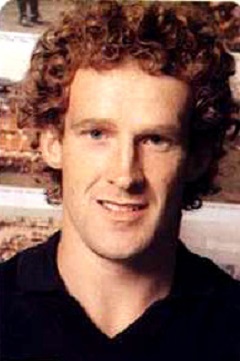 Peter Scott Francis was a hard-running, skilful wingman who is fondly remembered for his starring role in Carlton’s famous 1979 Grand Final victory over Collingwood – before he was controversially traded to Fitzroy, and went on to play 158 career games at four clubs.

Born in Heathcote in central Victoria in 1958, Francis was the nephew of Leo Francis, a wingman himself who had played 78 games with North Melbourne from 1945 to 1951. In 1977, Peter was starring for South Bendigo when he was invited to try out at Princes Park, and his form at Reserves level in the latter part of the season left Carlton’s match committee smiling. In guernsey number 47, Francis played regularly across half-forward and kicked 32 goals in only a handful of games.

The following year, he made his senior debut off the interchange bench against Essendon at Waverley in the Blues’ first game of 1979, when three other future stars in Wayne Johnston, Alex Marcou and Robbert Klomp also started their VFL careers. Peter came on late in the game and racked up nine possessions as Carlton beat the Bombers by 21 points. As that season progressed, Francis consolidated his place in a powerful team that sat two wins clear of North Melbourne on top of the ladder after the home and away rounds. Fashionably tall for a wingman of that era, he was disciplined, quick, and a fine mark overhead. His concentration was good, he was eminently coachable, and he could play either an offensive or defensive role as required.

In late September 1979, Francis took part in his twenty-third VFL game, and was one of the Blues’ prime movers in a thrilling Grand Final victory over Collingwood. In front of nearly 113,000 fans on a muddy MCG, Carlton beat the Magpies by five points in a match forever remembered for Wayne Harmes’ determined chase, dive and round-arm swipe at the ball in the dying minutes. Harmes’ actions sent the ball skidding from Collingwood’s right forward pocket into the goal-square, where Ken Sheldon raced in alone to gather and kick the goal that decided the Premiership. Harmes was a worthy winner of the inaugural Norm Smith medal as Best on Ground, but Francis, ‘Dominator’ Johnston, and champion defender Bruce Doull could all have just as easily been chosen. Whilst the Harmes - Sheldon goal will always be remembered Francis 'arguably' kicked the goal of the day with a snap from the boundary in front of near Bay 13 was in front of the Southern Stand, it was a huge effort with the wet, heavy footy.

The Blues confirmed their standing as a League power by topping the ladder again in 1980, only to be bundled out of the finals by two straight losses. Meanwhile, Carlton’s neighbours Fitzroy had gone into freefall. Finalists in 1979, the Lions had plunged from fourth to wooden-spooners in the space of 12 months, despite the emergence of a new star in Frank Marchesani, a classy wingman from Marcellin College who was widely-regarded as Recruit of the Year. Imagine then, the furore that erupted in the off-season when Marchesani told Fitzroy that he wanted a clearance to Carlton. Rumours abounded that he was being lured to Princes Park by financial promises that Fitzroy had no hope of matching – but these were immediately denied (and have continued to be denied) by both Marchesani and the Blues. Frank just wanted out of Fitzroy, and Carlton was his preferred destination. The next problem however, was that Fitzroy flatly refused to negotiate, so Marchesani was forced to stand out of the game for six months - until right on the deadline for mid-season clearances on June 30. With no viable option, the Lions at last relented and agreed to swap Marchesani for Peter Francis, which in turn made the situation uncomfortable for Carlton.

A few hours hours later, Carlton’s Chairman of Selectors, Wes Lofts, had the difficult task of telling Francis that the game he was about to play – against North Melbourne at Princes Park – would be his last in Navy Blue. When the news broke, it caused considerable disquiet among the Blues’ players and fans, because Francis was a popular and respected member of a very good football side. However, it didn’t destabilise the team’s spirit, and Carlton surged on to the glory of two more Premierships in 1981 and ’82.

Marchesani went on to a relatively short and chequered career with the Blues, and it can be argued that he never realised his full potential during 36 matches in five injury-plagued seasons. On the other hand, Francis was valuable and consistent at Fitzroy (40 games), Richmond (52 games) and Essendon (19 games) in a career that stretched through to 1988. Francis will be remembered as a player who could hold his own whether it was as a wingman, half-back or ruck-rover He was a player who was a consistently high possession winner. He had good ball skills and kicked well to position

When his playing days ended, Francis turned to coaching, and in 1989 took over the reins at VFA Club Box Hill (playing coach). In 1991 he moved on to St Kilda, where he was reunited with his Blues Premiership teammate Ken Sheldon and served as the Saints’ last U/19's Coach in 1991 and Reserves coach from 1991 to 1994. Later still, he began a successful career in coaching (1995 - 1996) and as a football administration as was Regional Manager of the Gippsland Power in the elite TAC Cup Under 17 competition for more than a decade.

Away from football he works in the banking industry and lives in Warragul.

In 2010, Francis' name graced the football media once again with the news that his nephew Andrew Collins was joining Carlton. By coincidence, Collins had agreed to move from Richmond to Carlton, in a direct swap for the Blues' 43-game midfielder Shaun Grigg.