Carlton defeated Sydney by 16 points at the MCG. Kernahan kicked 5. 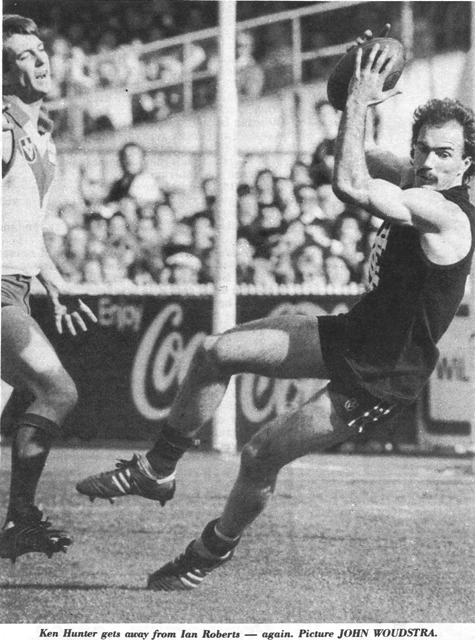 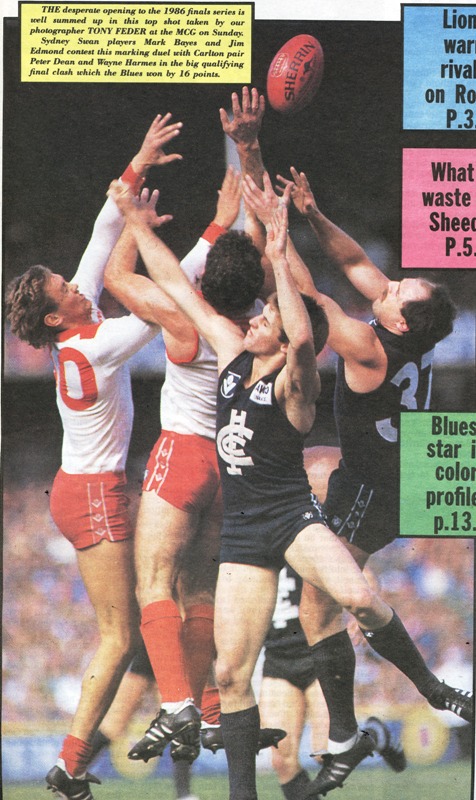 
Blues expose Swans
The Swans gave the reliable Ian Roberts the task of minding brilliant Carlton utility Ken Hunter, who was lined up on the forward line. Roberts, a veteran of 105 senior games, has played most of his League football in the back pocket on the resting rovers. Roberts is not renowned for his aerial strength, yet was given the task of minding one of the best marks in the business. It was no contest almost from the start, Hunter continually outmarking the unfortunate Roberts. Hafey did not move Roberts until Hunter had kicked three goals and turned the match Carlton's way. The damage had been done.

The Swans also went into the match without anyone tagging brilliant Carlton centreman Craig Bradley. The Swans obviously had enough faith in Greg Williams that his influence on the game would be greater than Bradley's. However, the two play entirely different styles of games and the Swans must have realised that Bradley has the potential to swing any game. Williams ploughs through the centre, working hard and diving into the packs to win possession. Bradley prefers to be Carlton's linkman, continually finding space on the wing to take possession from his running defenders. Bradley was involved in almost every Carlton goal. He was the linkman the Swans were unable to counter because no one played him tight. The Carlton star must have thought all his birthdays had come at once as he continually found himself free to so what he liked. The Swans might have been better served by playing someone like Craig Holden on Bradley and still have Williams in the centre. This might have meant the playing a man short on the forward line, but as it was Bradley destroyed the Swans. If they are to play Carlton again they must shadow him. - Jim Main Inside Football.

Last game: Warren Ralph
Interesting Fact: This would be the last time these two teams would play at the MCG for 30 odd years!


Replay - Watch This Match In Full