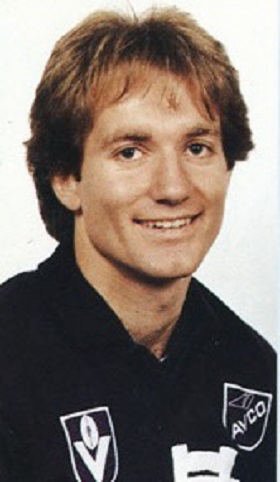 Alexander Marcou was a member of Carlton’s fabled Mosquito Fleet of brilliant small men of the 1970s and ‘80s – a lightning quick, three-time Premiership rover renowned for his ball-handling skills and excellent goal sense. After being recruited from VAFA club Thomastown at the age of 18, he won Carlton Reserves Best and Fairest award in 1978, and the following year began his senior career.

Upon arrival at Princes Park in 1976, Marcou was allocated the Blues’ guernsey number 50 before switching to the number 34 previously worn by three-time Premiership star Ian Robertson. Like Robertson, Marcou would go on to win three flags, and as at 2016, his 134 games still stand as the club record for most appearances in this number. Of mixed Greek and Macedonian heritage, Alex grew up in Melbourne’s northern suburbs and inherited his love of Australian football from his father, who at that time was a rusted-on Fitzroy supporter.

Although he was eligible to play at Under-19 level, Marcou started with Carlton Reserves and served a lengthy apprenticeship of 33 games over two seasons, primarily as a winger or centreman. His coach in 1978 was Carlton Legend Sergio Silvagni, and it was Serge who convinced the Blues’ match committee to include Alex in the senior team for the opening round of the 1979 season against Essendon at VFL Park. Three other first-gamers in Wayne Johnston, Robbert Klomp and Peter Francis were also included for that Saturday afternoon match, and all were destined for Premiership glory. Playing as second rover to Ken Sheldon, Marcou collected 15 disposals, 2 marks and 2 goals in an eye-catching debut. Carlton won by 21 points, and from that day on, Alex was an automatic selection in the Blues’ senior side.

Midway through that first fairytale season, in his 13th senior game, Marcou (already nick-named “Marcel” after the famous French mime artist Marcel Marceau) was named Best on Ground when he kicked five goals in the Blues’ big win over Richmond at Princes Park. By September, Carlton was two wins clear of North Melbourne on top of the ladder, and raging hot favourites to claim another flag when they met the Roos in the Second Semi Final at VFL Park. Marcou and Rod Austin warmed the interchange bench for much of that afternoon, before Marcel was unleashed and got busy with eight effective possessions. Carlton won convincingly, and marched straight into the against Collingwood.

A fortnight later, having played every game of the season for an excellent return of 34 goals, Marcel sat next to “Curly” Austin on the bench again on Grand Final day at the MCG, surrounded by an enormous crowd of more than 113,000. A boggy surface, cold wind and intermittent rain didn’t dampen the ferocity of the contest between the game’s greatest rivals, until some individual heroics by Wayne Harmes during time-on in the last quarter won the games’ biggest prize for the Navy Blues. Marcou was on the ground at the final siren, having had a shot for goal that just missed with his 12th possession After just 24 games, Alex had joined the exalted ranks of Carlton Premiership players.

Season 1980 saw upheaval at Princes Park when President George Harris was voted out of office in tumultuous circumstances. Former champion ruckman “Percy” Jones replaced Alex Jesaulenko as senior coach, but the Blues never really gelled as team before crashing out of the finals in straight sets. Marcou had another fine year (apart from spending a month on the sidelines with an ankle strain) and kicked 17 goals in 19 matches. Late in the season he was selected in the VFL squad for a match against a combined ACT team in Canberra. Alex did well and was named among the three best for the Vics, but in a huge upset, the home side won by 13 points. Back at Carlton, Jones was sacked at season’s end and replaced by former Hawthorn Premiership player and coach David Parkin.

Parkin’s methods and discipline took Carlton into the finals again in 1981, thanks in no small way to the Blues’ array of brilliant, versatile small men – the Mosquito Fleet of Rod Ashman, Jim Buckley, David Glascott, Trevor Keogh, Ken Sheldon and Alex Marcou. In the Second Semi Final against Geelong, Buckley and Marcou shared the roving duties and the Blues had so many stars in their 40-point victory that Alex’s 26 disposals, 5 marks and one goal wasn’t good enough to earn a mention among his team’s best five players. Two weeks later, Carlton took on Collingwood for the flag for the second time in three seasons, and triumphed by 20 points after trailing by 21 half-way through the third quarter. In front of another huge crowd of 112,000 at the MCG, Marcou started from the interchange bench, but was soon in the thick of the action, racking up 31 disposals and six marks on the way to collecting his second Premiership medal.

Alex enjoyed his most consistent and rewarding season the following year, when Carlton survived four consecutive tough finals to claim their third flag in four years. The Blues’ opponent in the 1982 Grand Final was their other great traditional rival, Richmond - who began the decider as strong favourites after cleaning up the Blues in a rugged Semi Final. As part of his game plan, Parkin ran three rovers in Ashman, Sheldon and Marcou, and all three became influential as the contest unfolded. With their team behind by 11 points at half-time, Carlton ruckmen "Wow" Jones and captain Mike Fitzpatrick seized the initiative in the second half and the Blues came storming back for a gritty 18-point win. That evening, amid the euphoria of a third flag win in four years by the Blues, Alex’s remarkable career statistics stood at 9 finals, three Premierships and 112 goals in 87 games. 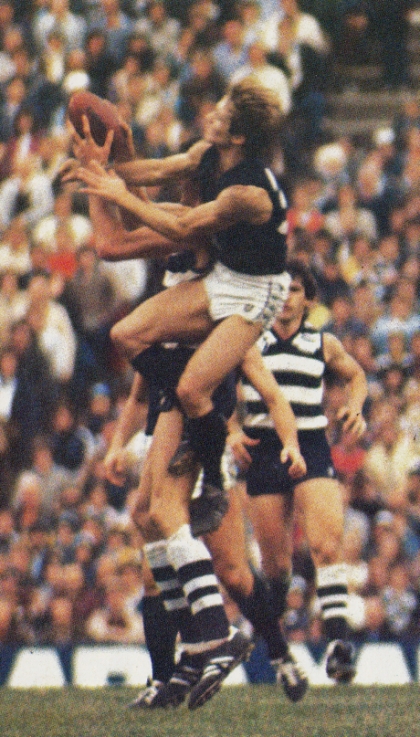 Highlights kept coming for Marcel in 1983, despite a couple of muscle strains that cost him the odd game or two. In May, he played his first and only State of Origin game for Victoria against South Australia in Adelaide, in a famous match that produced an aggregate 43 goals and a 56-point victory to the Crow Eaters. In July, Alex celebrated game number 100 for Carlton with a 6-goal victory over Fitzroy at Waverley, before playing his 20th final when the Blues suffered a devastating Elimination Final loss to Essendon. Perhaps that was a portent of things to come, because in an all too common story, Lady Luck seemed to turn her back on Alex from that time on.

Having already suffered a series of persistent soft tissue injuries, Marcou had his jaw broken in 1985, and again in 1986. Over those two seasons he managed only 10 senior games, and his frustration was compounded when he was on track for a return to the senior side on the eve of 1986 finals, only to tear a hamstring. Before that injury his form with Carlton Reserves had been good enough to see him finish third in the voting for the Gardiner Medal (Reserves Best and Fairest) despite only playing half a season.

Carlton’s heavy defeat by Hawthorn in the ’86 Grand Final turned a blowtorch on the Blues’ roster of players, and indirectly ended Marcou’s career at Princes Park. When club secretary Ian Collins bluntly told Alex that his place in Carlton’s senior team could no longer be guaranteed, it prompted the 28 year-old to consider a fresh start another club. Mainly because a number of ex-Blues were already playing there, he eventually chose St Kilda, and Carlton did not stand in his way.

Alex’s first season with the Saints in 1987 saw him used at both ends of the ground, and his experience was invaluable in a young team. However, hamstring and calf injuries slowed him down in 1988, and when he fell out with his coach Darrell Baldock, he made the decision to retire at season’s end. In two seasons at Moorabbin, he had played 24 games and booted 17 goals.

Although finished with League football, Marcou wasn’t quite ready to hang up his boots for good, so in 1989 he signed on with VFA club Springvale, where he was coached by his dual Premiership team-mate Phil Maylin. In 1993, Marcou, Maylin and another Premiership-winning Blue in Peter McConville formed an organization called the VFL - Virtually Forgotten Legends - as a social club and support network for former players and officials. Later, Alex returned to Princes Park as an energetic member of the Past Players Association, and in 2006 he was inducted into the Carlton Hall of Fame.

Alex Marcou and his Story About Fabulous

Carlton was invited by Prime Minister Malcom Fraser to the Lodge in Canberra after winning the 1981 Grand Final. Alex recalls the story at a Carlton function.
Warning, this video contains swearing.
https://www.youtube.com/watch?v=ZKCrnidb_ZM