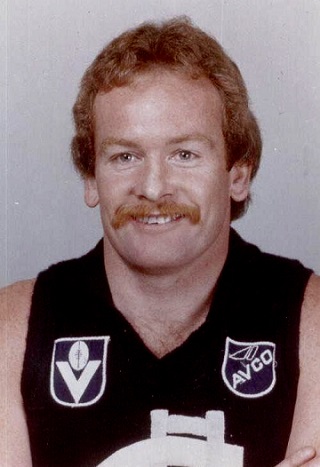 A hard-running, tenacious, red-haired utility from South Australian club Woodville, Phil 'Shark' Maylin was a month short of his 24th birthday when he made his debut for the Blues in 1980, and went on to be a popular member of Carlton’s 1981 and ‘82 Premiership sides. Virtually from the day of his arrival at Princes Park in the early summer of 1979, Maylin’s skill set and work ethic demanded that a place be found for him in the reigning Premiership team.

After accepting guernsey number 13 and a place on the wing for his first senior game against Collingwood at Victoria Park in round one of 1980, Maylin endured a baptism of fire as Carlton won a torrid clash by 38 points. Playing alongside Ken Sheldon and Peter Francis on Carlton’s centre line, Phil showed the benefit of maturity as he gathered 19 disposals and kicked his first career goal. The Blues’ match-winner however was Wayne Johnston, who tore Collingwood’s defence apart and kicked seven majors. Former St Kilda defender Val Perovic also impressed in his first appearance for his new club, while Peter ‘Percy’ Jones made a flying start to his senior coaching career.

When the home and away season concluded that year, Carlton had only Geelong perched above them on the ladder. The Blues seemed right in the hunt for another flag, until heavy defeats by Richmond and Collingwood bundled the Blues out of the finals in straight sets. Carlton’s hierarchy promptly sacked Jones and installed former Hawthorn Premiership coach David Parkin in his place. By then, Maylin had done everything asked of him in his 22 matches over the season (including both finals) and when Parkin arrived, he and Phil found immediate rapport. Soon, Maylin was being given additional responsibility, pinch-hitting in the role of ruck-rover or occasional centreman.

In 1981, the Navy Blues – strengthened by more quality local and interstate recruits, including future champions Ken Hunter and Peter Bosustow - claimed the clubs’ 13th Premiership with emphatic finals victories over Geelong and Collingwood. In both of those games, Maylin held his own in the pressure-cooker tempo of finals football. Again running off a wing (alongside former Melbourne champion Greg Wells and youngster David Glascott) Phil was among the Blues’ best players in Carlton’s emphatic 40-point win over Geelong in the Semi Final at VFL Park. Two weeks later, the same trio held sway across the centre of the MCG in a typically tough Grand Final watched by more than 112,000 spectators. Inspired by their captain Mike Fitzpatrick and Norm Smith medallist Bruce Doull, the Blues over-ran Collingwood in the last quarter for a glorious 20-point victory.

In 1982, one day short of one year later, Carlton claimed back-to-back flags – after a torrid campaign of four sudden-death finals matches in successive weeks. Winding up the home and away rounds in third place, the Blues began their Premiership defence impressively, beating Hawthorn by ten goals in a Qualifying Final. Maylin played in the centre that day, releasing Wayne Johnston to roam across half-forward, but the plan went awry when ‘The Dominator’ was reported for striking, and suspended for two weeks. To compound that setback, Richmond comfortably beat the Blues in the Second Semi-Final. Maylin supported Fitzpatrick in the ruck in that match and was valiant in gaining 27 possessions, but the Tigers’ dominant first-quarter established a lead that Carlton couldn’t overhaul. That defeat forced the Blues into a Preliminary Final rematch with Hawthorn. Maylin returned to the centre against the Hawks, with Glascott and Frank Marchesani on the wings, and all three were influential in an emphatic 31-point victory that set up another Carlton-Richmond Grand Final.

Johnston’s return to the Carlton line-up boosted the Blues on Grand Final eve, especially so because the star of the previous week; full-back Rod Austin, had been ruled out of the decider by a thigh injury. Coach Parkin recast his side, sending Doull to full-back, Jim Buckley into the centre, and Maylin back into a ruck-roving role at the feet of Warren ‘Wow’ Jones. Each of those moves clicked, and the Blueboys withstood everything that the Tigers could throw at them, steadying in the last quarter to win Carlton’s 14th Premiership by 18 points. 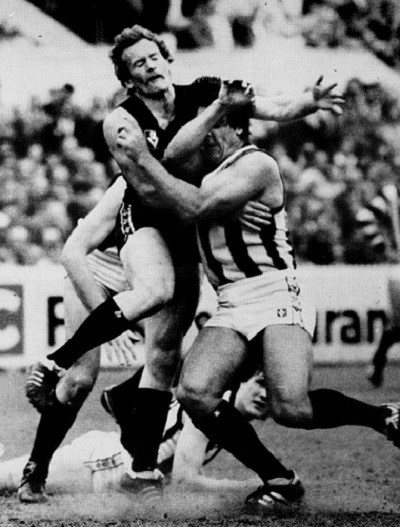 As has happened to so many players, the euphoria of double Premiership success lasted only until the following season for Maylin. Injuries, and a tapering-off in consistency, restricted him to only eight senior appearances in 1983. He saddled up again in 1984, playing 11 games and booting eight goals, but by mid-season it was obvious that the blossoming potential of youngsters like Paul Meldrum, Mick Kennedy and WA recruit Wayne Blackwell was going make it increasingly difficult for Maylin to hold a place in Carlton’s senior team. He pulled on his boots for the last time as a Blue in the final round of the ’84 season, playing on a half-forward flank in Carlton’s six-goal win over South Melbourne at Princes Park.

Shortly afterwards, Phil applied for, and was granted a transfer to Footscray, where his qualities as a clubman and a mentor to the younger players was soon appreciated as much as they had been at Carlton. He played another 33 matches over two seasons for the Bulldogs, then retired from VFL football to accept an offer to captain-coach VFA club Springvale (now the Casey Scorpions). He was an immediate success with the Scorpions, taking them to the 1987 VFA Premiership with a win over Port Melbourne that is still celebrated as the defining moment in the club’s history.

‘Shark’ led Springvale until his retirement from the field in 1990, but after a year off he was drawn back to coaching with suburban clubs North Kew and Bulleen-Templestowe. In 1995, he returned to the Western Oval as an assistant to the Bulldogs’ senior coaches Terry Wallace and Peter Rohde, then stepped up to the role of Footscray’s Chairman of Selectors.

In 2003, Phil returned to coaching in his own right with the Eltham Football Club in the Northern (formerly Diamond Valley) Football League. He led the Panthers for six years, before somewhat controversially switching to neighbouring Bundoora in 2009. Two seasons later, the Bulls won the NFL Division 1 Premiership with a hard-fought 10-point Grand Final victory over Heidelberg.

In 1993, Maylin and two other former Blues; Alex Marcou and Peter McConville, formed an organization they called the VFL – Virtually Forgotten Legends. As well as being a social club for former players and officials, its aim was to raise funds for a wide variety of charitable causes. In the first five years of its existence, the VFL distributed over $200,000.