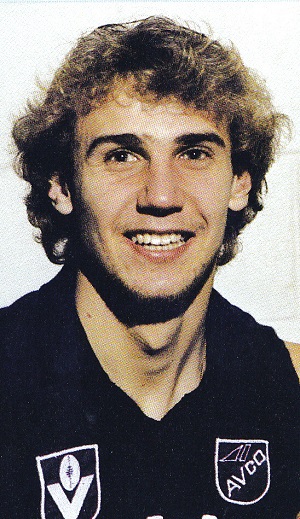 When struggling Fitzroy unveiled Frank Marchesani in 1980, their tall, pacy recruit from Marcellin College made a huge impression. A smooth-striding wingman who loved kicking goals, he thrilled the Lions’ supporters in his 16 matches (including some fine efforts against the Blues), won Recruit of the Year, and was seen by many as a saviour of the club.

That was until late the off-season, when Marchesani shocked Fitzroy by requesting a transfer to Carlton. Howls of protest immediately echoed down Brunswick St, as the 1979 Premiers were accused of plundering their hapless neighbour in another example of heartless greed. The simple fact of the matter however, was that Frank was unhappy at Fitzroy. He had friends playing at Carlton, so the Blues were his preferred destination, but he was intent on a move regardless.

Carlton’s Chairman of Selectors Wes Lofts led the push to get Marchesani to Princes Park, only to run into a brick wall of refusal from the Fitzroy side. Unable to negotiate a clearance, and insistent that his days the Lions were over, Frank took the only option left. He stood out of the game to force a resolution.

Eventually, sanity prevailed. Fitzroy relented right on the deadline for mid-season clearances (June 30) and Marchesani became a Carlton player in exchange for the Blues’ popular 1979 Premiership wingman, Peter Francis. That evening, Francis turned up to take his nominated place in the side for a night match against North Melbourne, only to be informed by Lofts that from then on, he was a Fitzroy player. That episode caused considerable resentment at Princes Park , but happily didn’t derail the Blues’ drive towards the finals.

Carlton’s confidence in Marchesani was plain when he was given guernsey 25 for his debut match in navy blue, which came in one of a series of Sunday ‘trial’ games against South Melbourne at the MCG in August, 1981. Prior to that weekend, the senior panel of VFL umpires had gone on strike over pay and conditions, so the match was controlled (very competently) by two Under 19 umpires. Frank was eased into action off the bench, and Carlton won by 23 points.

By Round 21, the Blues were gearing up for September when they took on North Melbourne at Waverley. Marchesani started the game on a wing, but limped off the field before half-time with a torn hamstring. That setback ended his season after just three games, and kept him out of Carlton’s successful 1981 finals campaign.

It took until mid-way through 1982 for Marchesani to show glimpses of his real ability, when he settled into regular place in the Carlton centre line alongside Phil Maylin and David Glascott. He almost single-handedly won the game against North Melbourne at Arden Street in June, when he took control of one side of the ground in the last quarter with a dominant effort. Three goals down with just minutes to play, Carlton charged back into contention and won by nine points.

Frank was left out of Carlton’s first two matches of that year’s finals series, then forced his way back into the side to be part of the Blues’ impressive five-goal Preliminary Final victory over Hawthorn. This set up a Grand Final showdown with minor premiers (and flag favourites) Richmond, who had benefited from a week’s rest after knocking over the Blues by four goals in the Second Semi-Final.

Prior to the 1982 Grand Final, staged before more than 107,000 people at the MCG, Carlton coach David Parkin tried to unsettle Richmond by sending 22 players (including Marchesani and David Clarke – who were not part of the selected side) out on to the ground prior to the bounce. As the teams made for their positions after the toss, that pair then disappeared up the race to allow Wayne Johnston and Jim Buckley to take their places. Carlton routed Richmond by 18 points in a great victory remembered for Johnston and Mike Fitzpatrick’s dominance of the centre, and Bruce Doull’s amusing encounter with a female streaker.

From that point on, Marchesani’s career was a series of fits and starts. He played 14 matches and kicked 13 goals in 1983, only to be struck down by a serious lung infection that prevented him from playing at all in ‘84. He was retained on the playing list for one more year, but only managed three games. His last match for Carlton was the 1985 Elimination Final against North Melbourne at Waverley.

On that occasion, Carlton was hamstrung by injury when Bruce Doull and Rod Ashman were both ruled out prior to the game. The Blues gave their all, and led by five goals at the main break, before North rallied to boot eight goals to one in the last quarter for a 19-point win.

Marchesani announced his retirement after that defeat, but Essendon talked him into a comeback for the 1986 Season. He was placed onto the playing list at Windy Hill, broke down again, and didn’t manage another senior appearance.

Just as a footnote, Marchesani represented Carlton on a few occassions in the Grand Final 100 metre sprint. It was dominated by Hawthorn's Geoff Ablett for a period, but Marchesani took out the honour in 1983.