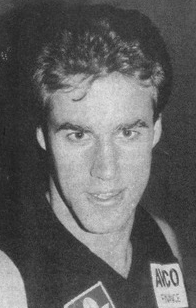 As a footballer, Ian Herman was something of an enigma - a classy, elegant 183 cm half-forward or ruck-rover who never quite reached the heights his ability offered, because throughout his time at Princes Park he was as dedicated to building a business career as he was to his football. Recruited by Carlton as a 21 year-old from amateur side Collegians, he played 48 games and kicked 38 goals in five seasons between 1987 and 1991.

Herman had originally played at junior level with both St Kilda and Hawthorn. In 1980, at the age of 15, he landed a place in the Saints' junior development squad that toured Tasmania as a promotional activity for the club. Other members of the squad included Tony Lockett, David Grant and Rod Owen. Even so, Herman later refused an invitation to join St Kilda’s Under 19’s, because he was convinced that too many promising young footballers played two years with the thirds and then just disappeared – and he was in no hurry to do the same. Instead, he concentrated on his accountancy studies, and his school football with Haileybury College.

However, just around the corner from Ian’s home lived Hawthorn stalwart Russell Greene. The pair often talked football, and Greene eventually talked Herman into turning up at Glenferrie Oval for successive pre-season trials. Following the second of these, Hawks coach Allan Jeans drew Herman aside to tell him that he hadn’t made the final list because it was believed he was carrying stress fractures in his feet. This wasn’t the case, but once again, Herman was undeterred. He headed back to Collegians, and resumed playing in the shadow of his flamboyant and equally talented older brother Richard.

Ian’s story then took another twist when Haileybury coach Ken Phillips - who was an ex-South Melbourne player – met Carlton’s Secretary Ian Collins at a social function and told him that Collegians had a couple of youngsters in their side who showed real potential. As fate would have it, Richard Herman decided to retire from football to concentrate on cricket before ‘Collo’ was able to check out Phillips’ tip, and when he did, it was Ian who caught his eye.

Collins promptly invited Herman to Princes Park for pre-season training over the summer of 1986-87. By then, Ian had completed his studies and joined the prominent share broking firm of Grant Thornton – a world-wide financial giant with offices in more than 50 countries. Happily, Blues coach Robert Walls was very supportive when Herman explained that at times his profession would have to take precedence over his football, and the Blues were so impressed by his skill level that he was honoured with the number 25 guernsey previously worn by Alex Jesaulenko and Frank Marchesani.

In his debut season of 1987, Herman was eased into a talent-laden Carlton side that was on the verge of an emphatic 16th Premiership. He had his first taste of senior football in round 11 at the MCG, when he came off the bench late in the game, and experienced the additional thrill of kicking his first career goal as the rampant Blues destroyed the home side by 45 points. He played the next two games on a wing with the seniors, then returned to the seconds and celebrated his first year at Carlton as a member of the victorious Reserves Premiership team in September.

In 1988, Herman established himself in the senior side and played 17 matches, including three finals that culminated in a bitterly disappointing loss to Melbourne in the Preliminary Final. On the way to that finals campaign, he provided a season highlight for Blues fans when he saved his team from an embarrassing defeat by the lowly Brisbane Bears in round 21 at Carrara Stadium. With only seconds left on the clock, he swooped on the ball as it spilled from a pack, and snapped a brilliant goal from a long way out. Carlton won by three points.

Herman had another consistent season in 1989, although the Carlton Football Club as a whole was wracked by dissension on and off the field. Alex Jesaulenko returned as senior coach in the wake of Robert Walls’ sacking, but the team tumbled down the ladder and finished eighth. From then on, under Jesaulenko’s relentless discipline, Herman struggled to balance his business and football aspirations. His form tailed off, and he managed only seven games in 1990. By the end of that year, was thinking seriously about his football future.

Although Jesaulenko finished up in 1990 to be replaced by David Parkin in his second appointment as Carlton’s senior coach, Herman played only another three matches in 1991, and therefore decided that he would be happier and more useful at another club. Richmond then picked him up in the 1992 mid-year draft, and Herman became a Tiger in 14 games over two seasons. After that, he moved on to VFA heavyweights Sandringham, where he rounded off his football career by playing another 39 games, including the Zebra’s 1994 Grand Final triumph over Box Hill.

In the years since he hung up his boots for the last time, Ian Herman has gone on to conspicuous commercial success. As at 2011, he has risen through the ranks to become the Australian Managing Director of Grant Thornton, which has continued to expand and now has branches in over 100 countries.

He has no regrets about where the two main pathways of his life have taken him, and still retains a deep affection for the Carlton Football Club. “I was lucky I played a handful of games with a great team at its peak,” he has said. “My plan was to get the best out of myself in both football and business.”

Still an enthusiastic and long-standing member of the club, Ian has become a mentor and friend to promising 2007 draftee David Ellard.

Incidentally, Ian’s brother Richard – who was indirectly responsible for his recruitment by the Blues - went on to have a glittering career in district cricket for the Melbourne Cricket Club.