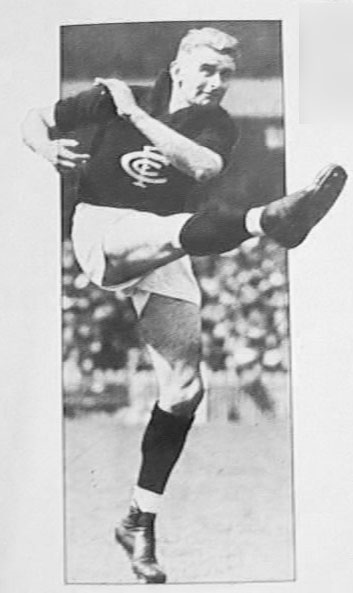 Henry Francis 'Soapy' Vallence is a true legend of the Carlton Football Club, and one of the most prolific goal scorers of all time. In a stellar 204 game VFL career between 1926 and 1938, he kicked 722 goals - a club record that stood for more than fifty years, until it was eventually bettered by another champion, Stephen Kernahan, in 1997.

Vallence came to Princes Park as a 20 year-old from Ballarat League side Bacchus Marsh. At 183 cm and 80 kg, the lean youngster soon impressed, and was nicknamed 'Soapy' because he was a slippery customer when the ball hit the ground - especially in wet weather. He was also a powerful, accurate kick and a brilliant high mark. The name stuck, and he wore it proudly throughout his career.

He made his debut for the Blues in 1926, wearing guernsey 22, and soon won a regular place in the team as a creative half-forward. Then in 1929 he was offered a chance at full forward, and never looked back after he topped Carlton's goal-kicking list with 64 majors. In 1931 he was the club (and the League's) top scorer with 86 goals, and in 1932 had his best return with 97. Only Geelong's George Moloney did better that year with 109.

On four separate occasions Soapy kicked 11 goals in a match, and two of those games were finals; the first Semi in 1931 and the Preliminary Final in 1932. He was a renowned big-occasion player, and never went missing when the contest was fiercest. In eight of his twelve seasons with the Blues, he was our major goal-scorer, as well as a standout performer in each of his five appearances for the Victorian state side.

In 1937 Soapy's form tapered off, and he was dropped to the seconds. Thinking his time at Carlton might be up, he agreed to join VFA team Williamstown. But Carlton's new coach Brighton Diggins wouldn't hear of his star leaving, and talked Soapy into staying just one more year. It was a wise decision for all concerned. Regaining confidence and touch, Soapy had another stellar season. He slotted another 81 goals as the Blues won their way into the 1938 Grand Final, and beat the strong favourites Collingwood by 15 points. Carlton's game plan - which included playing Vallence wide on one half-forward flank, and bombing the ball long to stand-in full forward Ken Baxter - unbalanced Collingwood, and the final score flattered them.

At the end of that special season, a grateful Carlton committee cleared Soapy to Williamstown as agreed. Some thought the 32 year-old champion was looking to take things easy, but were soon to be proven very wrong. In his first match for the Seagulls, Soapy booted nine goals. A couple of weeks later, against Oakleigh, he notched eight majors in one quarter! On the back of Vallence's 133 goals for the season, Williamstown made the 1939 VFA Grand Final, and beat Brunswick in a torrid encounter that made it two flags in a row for Soapy.

Williamstown made the finals again in 1940 and '41, then the competition was suspended because of World War II. Before that happened however, Vallence signed off with a fabulous 20-goal haul against Sandringham - including another eight in one quarter! In all, he played 61 games and booted 337 goals for the Seagulls, at the superb average of 5.52 goals per game. He then returned to Princes Park to captain and coach Carlton Reserves for three seasons while the VFA was in recess. When the Association resumed matches in 1945, he was at an age when most men start looking for the sofa and their slippers, but not this champion. Instead, he accepted an offer to captain-coach VFA club Brighton for one last year. Furthermore, in his final outing in 1946 - at the quite amazing age of 41 - he celebrated the end of a fabulous career in the best possible way, by booting eleven goals against Preston!

A familiar and popular face at Princes Park for many years after his playing days were through, "Soapy" was honoured as one of nine foundation members of the Carlton Hall of Fame in 1987. Barely four years later, on July 25, 1991, he passed away peacefully at the age of 86.

Thirteen years later, and sixty-two seasons after his last game for the Blues, Soapy was one of the first players selected in the Carlton Team of the Century.

The Age reported that on May 11 1935, that Harry Vallence had asked for a clearance to North Melbourne. On 8 March 1935, "The Herald" reported that Vallence was almost certain to be cleared to Fitzroy.

On August 3, 1935, there were no League games, as Victoria played South Australia on the MCG.

At Princes Park, the New Zealand Maori Rugby team played Victoria in front of a crowd of 16,000. Leading up to this match there was much discussion as to who were the better goal kickers, Rugby or Australian footballers.
Harry Vallence volunteered to take part in a goal kicking exhibition with his Rugby counterparts. Miles Hyland from the University rugby team took part. A representative from the New Zealand team did not appear. The players had to kick the ball over the rugby goal cross-bar.
"Two top goal-kicking contestants, Harry Vallence of Carlton, and Miles Hyland of University, were applauded as they entered the arena.
Hyland kicked with the rugger ball, which is longer than the Australian one, and the Carlton forward had the Australian ball.
Vallence kicked from distances from 50 to 80 yards, and gave a brilliant exhibition of straight and angle kicking to score 7 goals from seven tries. One of his drop kicks with the wind reached 80 yards.
Hyland was not at all happy and failed to register a goal. Most of his shots just failed to get over the bar.
Strange to say, the only weak kick by Vallence was a punt. He was warmly congratulated for one of the best exhibitions of kicking seen for a long time by Rugby followers." (The Age)

In the VFA opening round of 1940, Harry scored 15 goals for Williamstown in the away game against Yarraville in front of 16,000 people.
Up until the end of the 1940 season, Vallence had scored 244 goals in just two years with Williamstown. He was appointed vice captain of the Seagulls in 1940.
In 1942 Soapy would return to Carlton to captain and coach the Carlton Reserves. The club had been badly depleted by World War II, losing many experienced players to the armed forces. The thirty-seven year old was still very fit and his experience invaluable.

To read the Williamstown Chronicle's 1942 story Carlton Makes a Raid , about Vallence, click here> http://nla.gov.au/nla.news-article70715142
The Argus: 'Soapy' Has Them Roaring Again (August 1955): 51 year-old Harry 'Soapy' Vallence is pulling on the guernsey to play with Camden in the Federal League.
To read the story, click here> http://nla.gov.au/nla.news-article71673902

Articles: Every Picture tells a story - Signatures from 1935 | The Magical 'Three Goal Average' | The Longest Roads to Glory