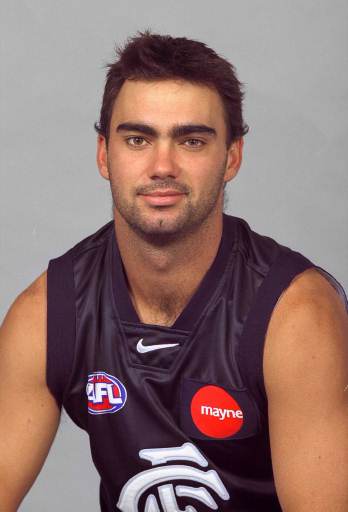 
For years after his departure from Princes Park, Murray Vance was the subject of heated debate among fans in regard to the recruiting strategy at Carlton during the 1990s. The Blues’ first selection at number 6 in the 1998 National Draft, he was a solid size at 189 cm and 85 kg, but would eventually play just five senior games in three seasons on Carlton’s list. Not tall enough for key position, and not quick enough for the midfield, Vance was somewhere in between. A dreadful spate of injuries (including a whole season lost in 2000) didn’t help his cause either.

During his teens, Murray was a classic early developer who was playing senior football for Goulburn Valley club Shepparton United by the age of 16. In 1998 he joined the Murray Bushrangers in the elite Under-18 TAC Cup competition, and was part of that season’s Grand Final victory over the Geelong Falcons. By the end of the year he was at Carlton, wearing guernsey number 6 and looking forward to an AFL career.

As things turned out, Vance had to bide his time with at Reserves level for the first eight months of 1999, until he was selected on the interchange bench when Carlton hosted the Western Bulldogs at Princes Park in round 18. In a cracker of a game, the Blues won by 5 points, while Murray picked up 9 possessions and four marks in a steady first-up effort. He kicked his first and only career goal a week later in a big win over Fremantle in Perth, and ended the year with four senior matches to his credit – all of them off the bench.

In 2000, the AFL End of the Millennium pre-season competition began on New Year’s Eve, and extended into March. But on the last Saturday night in January, Murray’s season ended before it had even begun. During the game against Fremantle at Waverley Park that night, Docker Clive Waterhouse caught Vance with sledge-hammer hip and shoulder, crashing him to the ground and sending him to hospital with a broken jaw. Months later he got back on the paddock again at Reserves level, only for a groin strain and a broken thumb to completely wreck his season.

Vance’s fifth and last game for Carlton in 2001 is hard to forget for various reasons, but particularly because of the guts and determination shown by a depleted Carlton side in a famous victory over reigning Premiers Essendon. Five days after their round 2 loss to Hawthorn, the Blues took on the Bombers at the MCG on the Thursday evening prior to Good Friday – and were rocked by the late withdrawal of three of the team’s most important players; Stephen Silvagni, Craig Bradley and Anthony Koutoufides.

As one of the emergencies, Vance was called up to play in a back pocket. He was hardly noticed until the early stages of the last quarter, when he appeared to panic and fired out a handpass to an unmarked opponent, who kicked a goal to put Essendon 17 points up. But inspired by midfielders Scott Camporeale and Brett Ratten, the Blues dug deep to pile on six goals straight and claw their way back to a sensational win. Incidentally, that day was also Vance’s 21st birthday.

However, there is little sentiment around the selection table, and Murray was omitted the following week. Then in June, he suffered another knee ligament strain, costing him more time on the sidelines, and sounding the death knell on his AFL career. Delisted at season’s end, he spent 2002 playing in the VFL with the Bendigo Bombers, and 2003 with Donvale in the Eastern Football League - where on-going knee problems plagued him throughout the rest of his days on the field.

In 2008, Vance was appointed assistant coach at Surrey Park in the EFL.