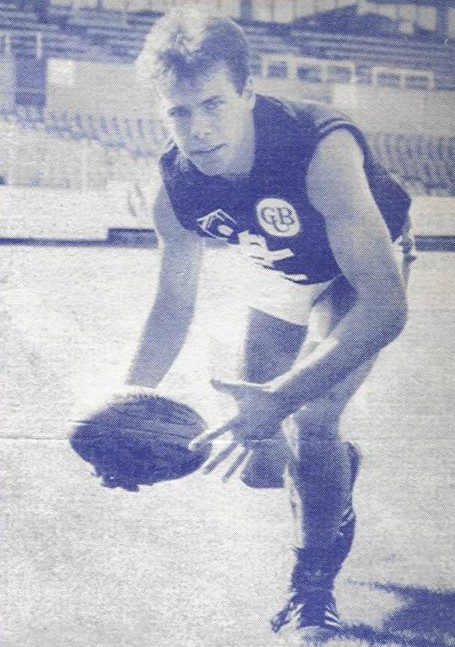 
Chris Bond was a hard-running defensive midfielder, or defender, taken by Carlton relatively early in the 1989 National Draft (Pick 35). Bond, a Tasmanian from the proud North Hobart club, would play 22 games for the Blues between 1990 and 1992 but wouldn't quite make it in the rich midfield Carlton had at the time. He stood 178cms and kicked 8 goals in his brief time at the Blues.

He debuted at VFL Park, on a Saturday, and by doing so, sitting on the pine, was watching only his second game of AFL/VFL football. The only other game he had seen was the the 1987 Grand Final, as a guest of the Carlton Football Club.

Back in 1987, he was playing for Wynyard, on the North West Coast of Tasmania. After moving South in 1989, to play for North Hobart, he had a supreme season in the TFL and represented Tasmania against Victoria. Six AFL clubs expressed interest in the nuggety little Tasmanian, but Carlton won and he was picked as Carlton's second draft choice. "A few people told me I should stay in Tassie one more year, but I was going on 21 and I'd had a good year in the TFL, and I realised it was time to come over."

Bond expected it would take half a year to break into the Carlton midfield. He didn't get a game in the Fosters Cup. But after a couple of blinders in practice matches and a dominating effort in the Round 1 reserves game saw Bond quickly elevated to the seniors. "Most of the advice I got was just to get out there and enjoy it."

Bond's first match was against Collingwood. "I was very nervous. While I was warming up, I was getting really keyed up and toey. But before I ran out, I wasn't as nervous, I just wanted to get on with the game." Bond spent the first quarter on the bench. Five minutes in to the second, Fraser Brown was injured. There was momentary confusion at the interchange gate, and then Bond was on!! Jamie Turner was his opponent. "When I first got out there, it was a bit strange. The ball was moving very quickly. I didn't know if I was in the right position or not. I had to find my feet, get the feel of the game." Bond struggled to tackle some much larger opponents when he first got on, but then took a handpass from Craig Bradley and got his first kick. "It makes a hell of a difference that first kick. I was told by a few people to kick it as long as you can. It gets all the nerves out of your system."

Darren Saunders picked up Bond at the start of the third and continued with him until the end of the game. After dropping a mark early in the third, Bond was awarded a free for a high tackle and drove the ball forward for Simon Minton-Connell to kick his sixth goal. In the last quarter, Bond struggled to find possession, with his most effective act being a deft palm to a running Ian Herman in the middle of the ground. "I thought it was a fair game first up. He gave us a bit of zip," said coach Alex Jesaulenko. "He's still got a long way to go. There's areas he has to improve in. But it was a fair game." "I didn't go as well as I wanted to go, but you never do. It was probably an average game. I learned a hell of a lot. I'd like to be given another go. There's a few things I want to do. It was a great exeperience, something I'll never forget."

Bond would find his way to Richmond from 1993 to 1997, before he made a bit of news for the trade that Richmond would execute with him. Bond managed to rack up 100 games and boot 32 goals with the Tigers. The fledgling Dockers would give up Pick #2 for the trusty servant, a pick that would ultimately deliver Brad Ottens to the Tigers. Bond would later captain the Dockers, he played 41 games and booted 5 goals playing for Freo.

Overall, Bond would play 163 games at the 3 Clubs, and move in to the position of Assistant Coach at the Bulldogs later in his career.