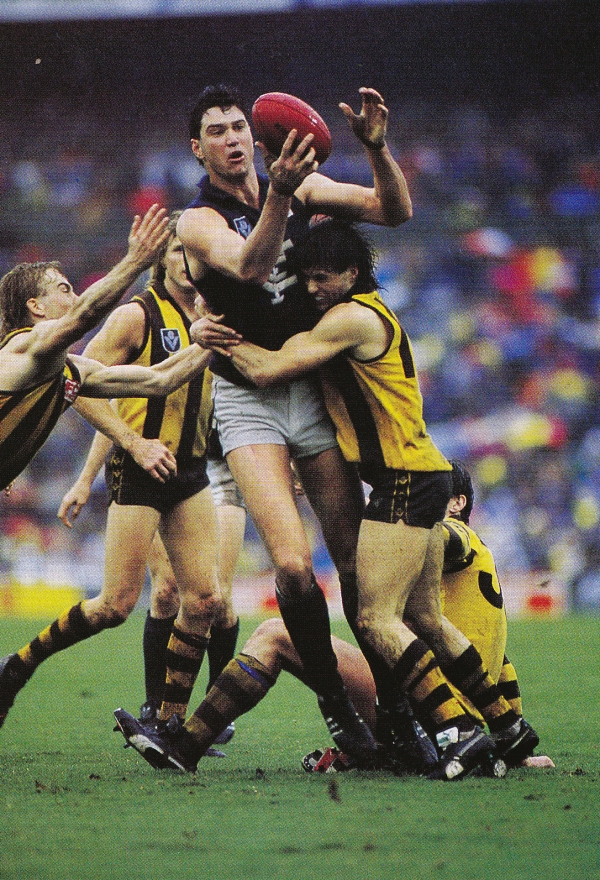 For much of the 1980s and 1990s, Justin ‘Harry’ Madden was seen as the goofy giant in Carlton’s number 44 guernsey; a smiling, good-natured, loping giraffe of a footballer who never seemed to take the game - or his participation in it - very seriously at all. Laconic, and with a wry sense of humour that made him enormously popular with supporters and team-mates alike, ‘Harry’ always claimed that someone as awkward and uncoordinated as him was a blight on the game.

The real truth is that Madden was one of Carlton’s great ruckmen; a 206-centimetre beanpole with outstanding tap skills, strong hands and a reliable left foot when shooting for goal. In a marathon 18-year AFL career that began at Essendon and flourished at Carlton, Harry played 332 senior games and kicked 190 goals between 1980 and 1996. Included in that tally were four Grand Finals, highlighted by Carlton Premierships in 1987 and 1995. He was voted Best and Fairest for the Blues twice, All Australian twice, and in 1985 went within one vote of sharing the Brownlow Medal with Footscray’s Brad Hardie.

Harry was originally recruited by Essendon while he was studying at St Bernard’s College in 1980. He joined his older brother Simon at Windy Hill and settled in quickly, but by mid-way through his third year it was obvious that while he stayed with the Bombers he would always play second fiddle to Simon, and Harry wasn’t content with that. After 45 games for the Bombers, he requested a clearance to Carlton, and in 1983 drove into Princes Park in his beloved Volkswagen Beetle to start a new career with the Navy Blues. By then he had also moved on to university to train as a teacher, and throughout the rest of his career would successfully juggle the heavy demands of parallel sporting and academic careers.

Madden’s first game for his new club came on a Sunday afternoon at the Sydney Cricket Ground in round 7, 1983. The Swans blitzed Carlton in the first term to lead by 37 points at quarter time, before the Blues fought back with a barnstorming 13-goal second quarter of their own. Harry was an instant hit with Carlton fans when he was sent to the goal square late in the match. He outreached a tiring Swans’ defence, took three telling marks, and kicked truly each time. Carlton won by 31 points, Madden finished with a five-goal haul on debut, and every Bluebagger knew that we had found another ruck gun.

Harry played ten matches and kicked 18 goals in his debut season, and when Mike Fitzpatrick retired at the end of that year, it provided Madden with the opportunity to fulfil the task he had been recruited for - to help fill the void when Fitzy called it quits. He started with another 5-goal performance in a record win over North Melbourne in round 1, 1984, and was consistently effective in his 22 games for the year. He played finals football for the first time as a Blue when Carlton bowed out after a Semi Final loss to Collingwood, but the future still looked bright.

In 1985, Harry claimed a place among the elite of the game with an outstanding season. Although the year ended in disappointment when an injury-ravaged Carlton lost the Elimination Final to North Melbourne, he was clearly the most effective and consistent big man in the competition. He confirmed that by easily winning Carlton’s Best and Fairest award, and running second – by one vote – to Footscray’s Brad Hardie in the Brownlow Medal count.

Twelve months later, Harry achieved another of his football dreams when he played in his first Grand Final, against Hawthorn. Beforehand, he used to say that all of life’s set-backs and disappointments were character-building, but in the wake of that awful 42-point defeat by the Hawks, even his usually unshakeable good humour seemed to temporarily abandon him. Beneath the happy go lucky facade, Harry was a dedicated professional, and he hated losing more than most.

It would take another year until Madden and his team gained redemption from that defeat, striking back to down Hawthorn by 33 points in the 1987 Grand Final. Fiery utility David Rhys-Jones, the Dominator; Wayne Johnston, and Harry Madden were Carlton’s best on another triumphant occasion for the Old Dark Navy Blues. Coming as it did only a few weeks after he had been named All Australian for the first time, the Premiership topped off another stellar season by Madden. He was given an extra two weeks to enjoy it, too, when he was suspended by the VFL tribunal for striking Hawthorn’s Michael Tuck.

Carlton’s fortunes began to wane in the wake of that flag triumph, although the team still managed to fight its way through to the 1988 Preliminary Final. Madden finished second to Craig Bradley in that year’s club Best and Fairest, and third behind Stephen Kernahan and Bradley in 1989. By then he had retired from teaching and returned to University to study architecture, while also working in an administrative role with the AFL Players Association. In 1990 he was elected President of the AFLPA, and two years later graduated a Bachelor of Architecture.

He won his second club Best and Fairest in 1991, and two years later played in his third Grand Final when the Blues were outclasses and outpaced by the ‘Baby Bombers’ of Essendon. On his way to playing on the MCG in September, Harry provided one of the great moments of 1993, during the second Semi Final against Adelaide at Waverley. He took a handpass on the defensive side of the centre square, and – realising that he was in space – immediately galloped off toward goal. While friend and foe watched in disbelief, he took one bounce, then another - steadied ... and roosted a superb 50-metre left-foot drop punt that never looked like missing. His boundless joy as he wheeled around to run back to the was one of the replay highlights of the year. 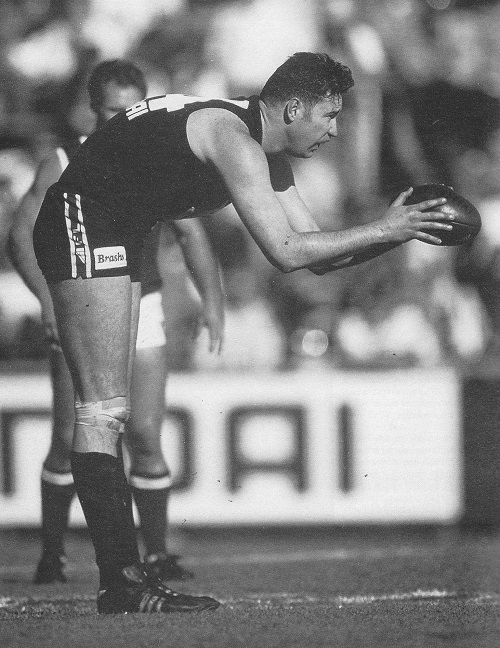 Redemption for that 1993 Grand Final defeat eventually arrived two years later, when Carlton thrashed Geelong by ten goals and claimed the Blues’ sixteenth Premiership. At the age of 34, Madden led a dominant Carlton’s ruck division to another memorable Grand Final victory. To make the triumph even sweeter, he was named All Australian for the second time, and confirmed as a life member of the Blues.

Harry admitted later that he should have retired at that point, especially because the up and coming Matthew Allan was showing such promise – but he allowed himself to be talked into another year. Carlton wound up fifth on the ladder in 1996, only to melt in the heat of finals football and lose their Semi Final to Brisbane by a humiliating 97 points.

It seemed that Harry’s playing days had come to an ignominious end by then, until coach David Parkin asked him to saddle up just one more time, and to run around in the Reserves for one last season as insurance against injury to Allen or youngster Mark Porter. Madden agreed and soldiered on, but wasn’t called back into the seniors before the season’s end. His wonderful career concluded on the reserves bench for the seconds, during a wet and miserable day playing Richmond at the Punt Road Oval.

On his retirement from the field at last in 1997, Harry resigned his position with the AFLPA and took up work as an architect, while exploring the possibility of entering state politics as a Labor Party candidate. Two years later, he took the plunge and gained pre-selection for the 1999 Victorian state election, standing in the Legislative Council seat of Doutta Galla Province. On the back of a landslide swing to Labor, Madden won the seat and was one of the most familiar members of the Victorian Government for the next decade, particularly when he was appointed Minister for Sport, Recreation and Youth Affairs.

After the 2002 election, he became Minister for the Commonwealth Games, and despite a redistribution in 2006, was again elected as member for the Western Metropolitan Region. Still smiling, still laughing, he seemed headed for a long career in politics, too – until the Labor government of Premier John Brumby was tipped out of office by a huge electoral swing in the Victorian elections held in November, 2010.