An injury depleted Carlton (losing both Hunter and Blackwell before the game to injury) ran out 28 point winners (it should be noted we were only 1 point up entering time on!)

It was certainly a surprise victory. The reversal on Grand Final day led many 'experts' to believe that Carlton had 'played its hand' too early.

David Rhys-Jones would get best afield honours with his 31 possession performance on the wing. Doull also performed well and kept Dunstall quiet for the day. Fraser Murphy was reported and suspended for one game, meaning he would miss the Grand Final, ironically this misfortune had an interesting twist in the next year. 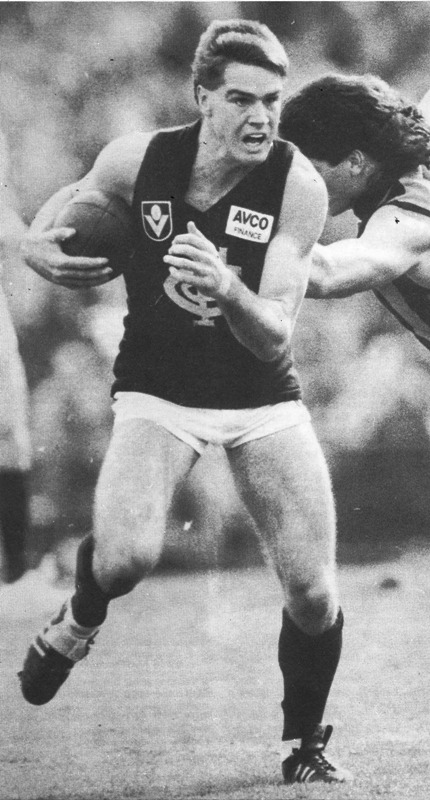 Blues tactics; the clear winner.
The Carlton-Hawthorn second-semi final at VFL Park on Saturday saw a tremendous tactical battle, the Blues clear winners. They won hands down with their clever use of Craig Bradley as a rover and the Hawks seemed unable to overcome their initial tactical disadvantage. Hawthorn's Colin Robertson was given the task of minding Bradley, but the South Australian still slipped away for 23 damaging possessions. He certainly was not the damaging player he was the previous week against the Swans, but he did fairly well. Wayne Johnston won the ball out of the centre for the Blues and David Rhys-Jones was brilliant on the wing. Hawthorn tried several tactics in an effort to cut Rhys-Jones out of the play, but they all failed. Rhys-Jones found room for himself to such an extent that Hawthorn fans were screaming "Who's on Rhys-Jones?". It was a question I kept asking myself during the match and at one stage it even appeared that rover Richard Loveridge was on the wing. Carlton, apart from having its won good running players, managed to cut Hawthorn's two most dangerous 'runners' out of the play. South Australian Peter Motley performed brilliantly on Gary Buckenara, while David Glascott was just as effective minding veteran Hawthorn skipper Michael Tuck. The Hawks tried to counter that by shifting Tuck to the half-back line, but Tuck was unable to have any influence on the game. As expected, Bruce Doull minded Jason Dunstall, and the Hawk full-forward was kept goalless in a performance he would prefer to forget. - Jim Main Inside Football.

Dominator shows his real value
What a great big-occassion player Carlton star Wayne Johnston is. He has been the driving force behind so many of Carlton's big wins in the past few years with his inspiring play. Saturday's second semi-final clash with Hawthorn saw the 'Dominator' at his brilliant best. He was in everything right from the first bounce and really lifted the Blues. At the start of the season, Johnston lost the captaincy to his good mate Mark Maclure and, narurally enough was disappointed. But in typical fashion he took the decision on the chin and has given Carlton a top season so far. You can bet that in the Grand Final on Saturday week, Johnston will be doing his utmost to bring that flag to Princes Park. It's all or nothing for the 'Dominator'. He knows no other way. And it's that type of fierce determination that makes him such an inspiring on-field leader - whether he's the official Carlton captain or not. - Michael Roach Inside Football.

New Blues top value.
The Carlton new boys were fantastic in the second-semi final against Hawthorn at VFL Park on Saturday. Former Swan David Rhys-Jones in his second season with the Blues, was at his very best on the wing. It has been some time since he has had more than 30 possessions in a game and he beat several opponents, including Richard Loverdige and Michael Tuck. Stephen Kernahan was beaten early by Hawthorn's Chris Mew, but fought back to continue his fine form in the finals. Of course, he kicked five goals in the Qualifying final against the Swans and had another five shots on Saturday for two goals. He is bound to have a big influence in the Grand Final, regardless of Carlton's opponent. Centre half-forward is the hardest position of them all to play consistently and to have Kernahan is such fine touch augers well for the big one. Peter Motley, after an injury-plagued season, is showing the form he produced at Sturt and in the state of origin games. He cut out a potential match-winner in Hawthorn's Gary Buckenara and had an excellent game. Fellow South Australian Craig Bradley, although tagged, still had 23 possessions and generated plenty of Carlton moves. Former Swan Bernie Evans was deadly around the goals with five goals from the forward pocket. He has genuine pace and the defending back pocket must play him extremely close. Western Australian Jon Dorotich was beaten early by Dermott Brereton, but too fought back to dominate for the rest of the game. All in all, the Blues purchases have had a big bearing on Carlton's performances this year. The end result will be on how they perform in the Grand Final, but their finals form so far suggests they should have a big impact. - Mick Malthouse Inside Football.