In the infancy of Australian Football, blue was the common colour of jumpers for people to wear, and most people who worked outdoors owned a blue jumper. Blue jumpers were originally from the Channel Island of Guernsey off the coast of France. The dye did not strip the wool of it's waterproof qualities unlike other colours, and therefore was ideal in keeping footballers warm and dry in this winter sport. Jumpers were expensive, socks and caps were relatively cheap, and they were easier to dye to other colours.
For example, Essendon's early guernseys were blue with a red sash, however, their socks and caps were red and black.

That is why these more affordable items were used to distinguish the various teams, until "modern" colouring methods became available. To see how football jumpers of all clubs have changed over the years, see Bob Meredith's fascinating football jumper web site; www.footyjumpers.com

But back to Carlton...

Carlton's jumpers were never blue and yellow/orange.
They were blue with white shoulder patches. Chamois was used on the shoulders as it was more comfortable to wear. However, after many washes the white dye or paint would wear off to reveal the yellow chamois underneath.
The image of the Carlton Guernsey the one-off 1900 jumper is incorrect and should be blue and white. 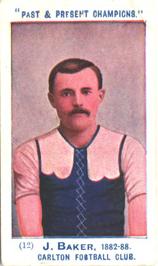 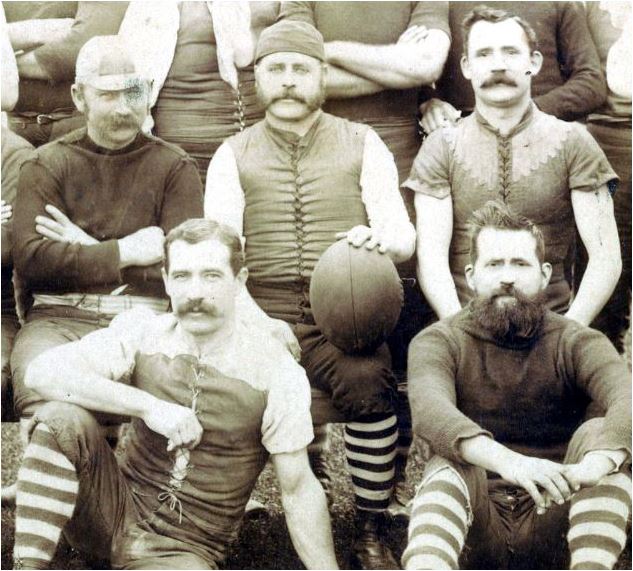 Various Carlton guernsey styles worn in an old players match against Melbourne. This is part of a larger photo and is believed to have been taken on 8 October 1881.
Former captain John Gardiner is holding the ball. Other possible players; Tom Power wearing cap to our left of Gardiner, Harry Guy to our right of Gardiner. Possibly John MacGibbon (sitting) front right. Possibly Charles Carter on the front left, although the 1881 timeline throws doubt upon it being Charles as he would have been just a 15yo in '81.
See 1881 October 08 to view this team photo.
(Image: Courtesy of the Brighton Historical Society) 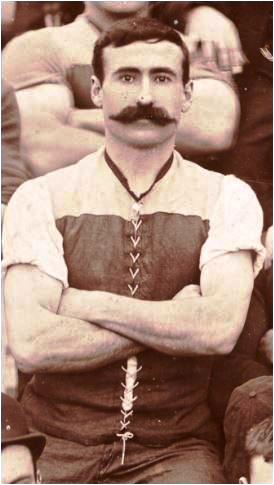 1909 - The monogram was introduced this year.
Note the differing monograms in this match, Harvey Kelly may be the player on the left.
This is an enlargement of a photo which appeared in the Australasian June 19 (p35) - taken at the June 12 Round 8, 1909 v St.Kilda match.
In 1909 Harvey Kelly is also photographed wearing one of these "alternative" monograms at training - see his Image Gallery.

This is the monogram from the blazer worn by Carlton secretary Patrick J. Cain in 1927. Could this be the same design as Harvey Kelly's? 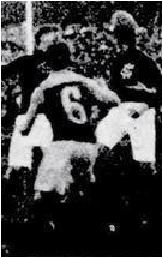 Possibly the first known image of the 1890-1907 canvas jacket/guernsey with a number, worn by Viv Valentine - Round 13, 1913
Numbers were introduced for the 1911 final series.
Image; cropped from Table Talk photo July 24 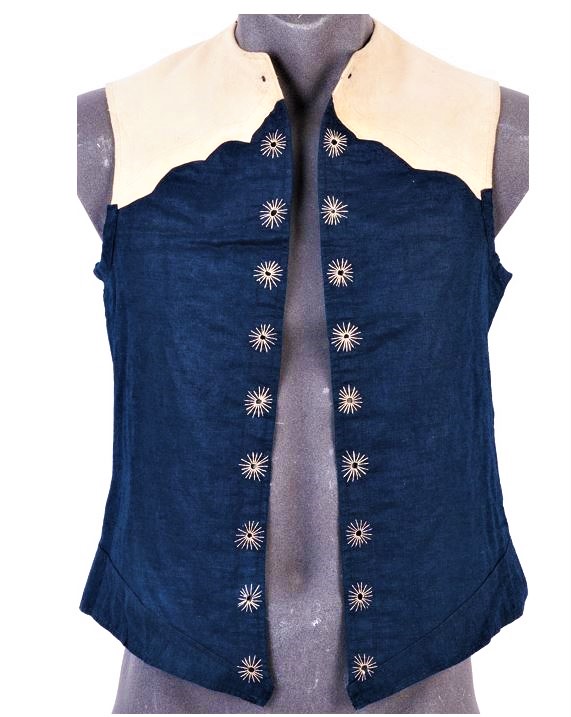 1890-1907 Never worn, believed to have been owned by George Bruce.
Now on display at the Carlton Museum 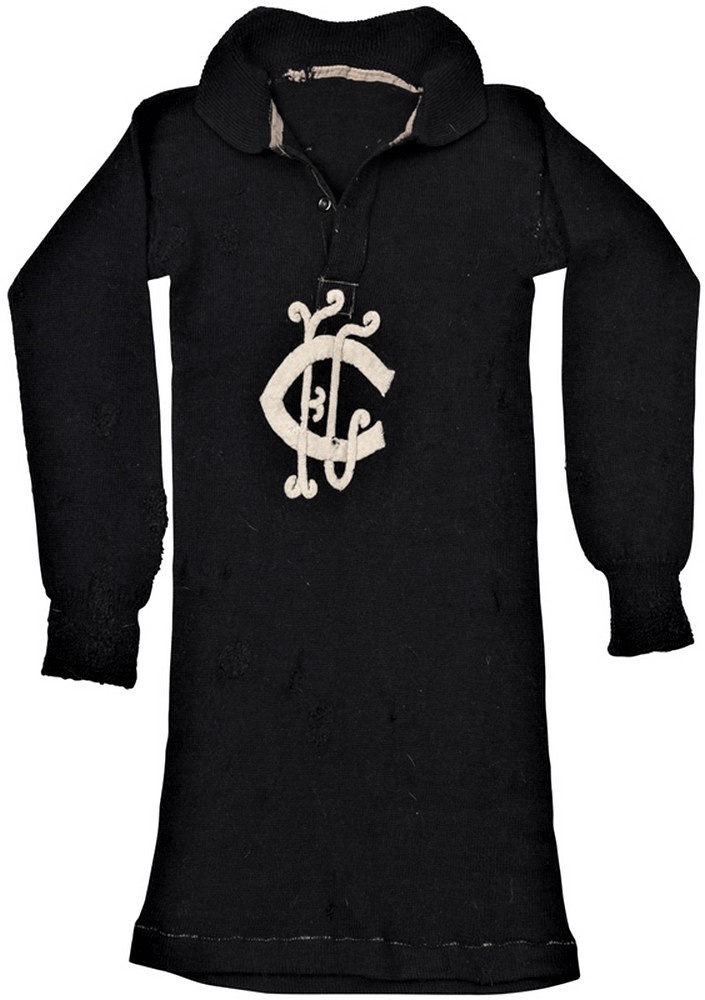 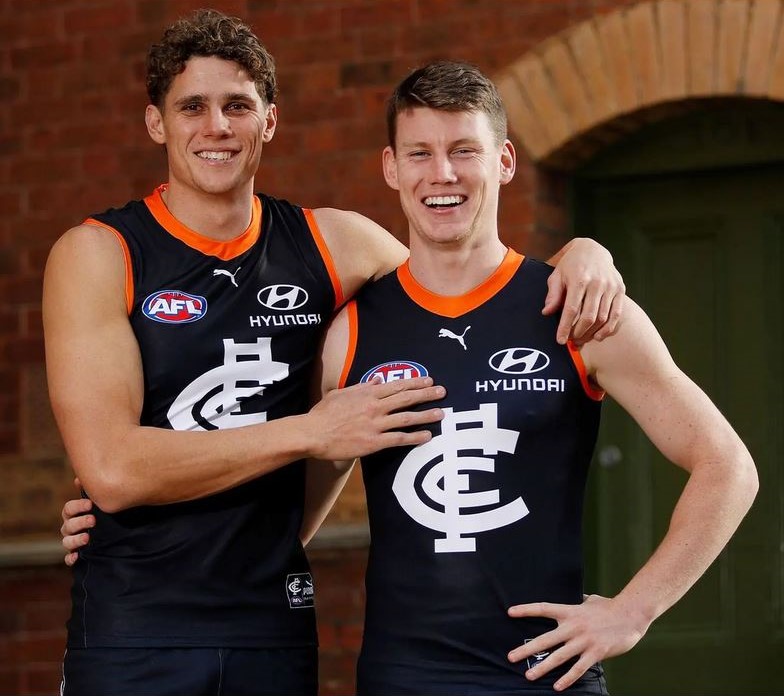 The Sporting Globe September 02 1939 (p4) recalled the first time the canvas jacket was discarded for a woolen guernsey.
In 1903 Wesley College went on it's first interstate trip and played in Adelaide. They played the Prince Alfred College.
"The Melbourne boys wore purple woolen jerseys picked out with gold at the neck and on the sleeves. They replaced the old canvas jackets which laced in the front."
Prince Alfred College and St Peter's College in Adelaide, in 1904 both adopted the woolen guernsey.
That year (1904) all the Sydney Colleges playing Australian Football made the change.
Carlton and Essendon were the first VFL clubs to adopt the woolen guernsey in 1908.
However, as we have seen, blue woolen jumpers were the common outdoor garment in the early days of the game and preceded the canvas designs.

1866 Carlton Annual Meeting, a proposal for a blue and white cap not taken up.
However, the book The Centenary Souvenir of the Carlton Football Club published in 1934 says of 1866,
"The orange cap, the sole insignia of a Carlton player, had been supplanted by the blue and white colours, which are now indicative of Carlton".
Note: The 1868 team photo shows some players wearing caps. There looks to be a lighter band on these caps perhaps these were blue caps with a white band?

1873 At a general meeting held July 01.
It was resolved that Carlton's uniform was to be blue knickerbockers (shorts or pants that ended just below the knee), long grey stockings/socks, and a blue cap.
The first mention found of the Blues wearing the uniform in a game was in the Carlton-Melbourne match on July 19.

When the Carlton ventured to Ballarat for a match on August 23, the Ballarat Courier (August 24 p3) commented on the Blues' uniform. "The dress of the Carlton men, blue jacket and knickerbockers and grey stockings, was attractive, and contrasted very well to the rest of the players."

1874 Carlton abandoned the grey socks for ones of blue and white hoops.
The Leader May 09 1874 mentions the uniform of blue knickerbockers, shirt and cap, blue and white striped hose.
The introduction of these socks is one year earlier than previously believed.

1876 The Australasian, May 20, reported that Geelong, "...has adopted a new uniform consisting of dark blue and white striped hose and cap...", some two years after the Blues had adopted the striped or hooped socks.
{img hspace="10" vspace="10" align="left" src="show_image.php?id=40073">
Close-up of Ernie Ashton's cap. July 04 1896
Is there a faint outline of a CFC monogram?

1905 April 15
Carlton wear white shorts, (dumping the blue shorts/knickerbockers) and discard the hooped socks for ones of Navy Blue.*

Round 2, 1906*
The Age match report mentions the change over to Navy Blue socks was in this game.

1924
The League decided that the Home team wear black and the Away team wear white shorts.
(Carlton wore Navy Blue shorts in Home games during the 1960's)

1948
The use of white laces, instead of black, on football boots became widespread from the late 1940's and into the early 1950's.
However, some Carlton footballers can be seen wearing them during WW2. White laces was a chore in cleaning them after each match or training session. Various products were on the market to spruce up the laces by applying a whitener on them and letting them dry.

Round 21, 1998 August 23
This Sunday against Collingwood, Carlton wore "clash" socks with a wide white band with blue CFC logo.
Carlton now wear them for away games against Port Adelaide, St.Kilda and Collingwood.

Round 6, 2010 May 02
Carlton played Collingwood at the M.C.G.
The Blues wore the "clash" socks, even though this Sunday match was a Carlton home game.
The club was queried about this and the reply was, "It was a directive from the AFL, unfortunately we had no say in the matter."

Round 3, 2011 April 08
Carlton played Collingwood at the M.C.G.
Even though this was a Carlton away match, the Blues wore their "home" plain, dark blue socks.

Round 7, 2011 May 09
Debut of the light blue clash guernsey, worn against St.Kilda.
Light blue shorts with navy blue "clash" socks.

Round 2, 2017 April 02
Carlton wore the white clash guernsey against Melbourne.
The new socks were navy blue with a large white band at the top and a narrow pencil thin white band below the large one.

Round 7, 2017 May 07
Carlton wore its traditional Navy Blue guernsey with white shorts against Collingwood.
The Navy Blue soxs with large white band on the top were worn.

Round 17, 2017 July 16
Carlton wore its traditional navy blue guernsey and orange socks against the Western Bulldogs on the MCG.
The orange socks were part of 'CARLTON RESPECTS, a family violence prevention initiative promoting respect and equality.'

Round 1, 2018 March 22
Carlton wore its away shorts against Richmond at the MCG. These "white" shorts are infact silver and are part of the clash kit the players occasionally wear.
However, the club has said that these shorts will be worn at all away games. The shorts have copped a bit of ridicule in the media and among Carlton supporters.
The monogramme this year has a siver/grey shadowing, perhaps it is to match this?

Round 3, 2020 June 21 (COVID-19 Pandemic affected fixture)
An away game at Geelong's Kardinia Park, the Blues wore its "home" navy blue shorts. The Cats wore white.
Was this an AFL directive?