CAST OFF YOUR CRICKET GARB OF WHITE;

LAY PAST THE WICKETS, BAT AND BALL;

WITH SPIRITS KEEN AND PROSPECTS BRIGHT,

SO LET US GIVE OUR ROYAL GUEST

A WELCOME OF A GLORIOUS SORT;

JOIN IN THIS TOAST WITH VIM AND REST,

1864 was the year that the Carlton Football Club was officially formed, although an earlier attempt at forming the club in 1861 has been found; -
see Formation of the Club, and for 1864-1896 football grounds see Pre VFL Venues
(In 1908 on the anniversary of 50 years of Australian Football, The Age ran a story of the history of football. Twice in the article the newspaper mentions that Carlton was formed in 1861.)

John Newton Jacomb had the unfortunate distinction of being the first Carlton player to break his leg.
(The Centenary Souvenir of Carlton p5. refers to this)
A report in The Argus July 4 1864 p5. mentions the Jacomb accident occuring at a Richmond football match, this could possibly be Carlton's first match.
This then could have taken place on July 2 1864.
The Argus Wednesday June 29 1864, p5;
Melbourne vs South Yarra/St.Kilda Friday July 1.
The Melbourne team list includes a player named Jacomb.
Could this be the same player?
Blueseum has recently (April 2011) been contacted by a descendant of John John Newton Jacomb and we are awaiting his playing details. This information could clarify July 2 1864 as Carlton's first game.
Unfortunately the relative's aging partent died before this vital piece of information could be passed on.

In The Footballer, 1875 edition, writing on the history of the game,
"At the beginning of 1864, Football, which has been growing in favor, received additional impetus, from the advent of Emerald Hill, Royal Park and Carlton."
The Footballer was the first publication dedicated to Australian Football and was edited by T.P. Power a Carlton pioneer player who was also on the Club's first committee.

At this stage of our existence, we were still to be called the Navy Blues. In fact, we had very little navy blue on our uniform at all - just a navy blue stripe. By 1871 we would have adopted a Navy Blue uniform and cap, earning the name 'the Blues', but it wouldn't be until 1908 that we would locate the white CFC monogram to complete the perfect jumper! 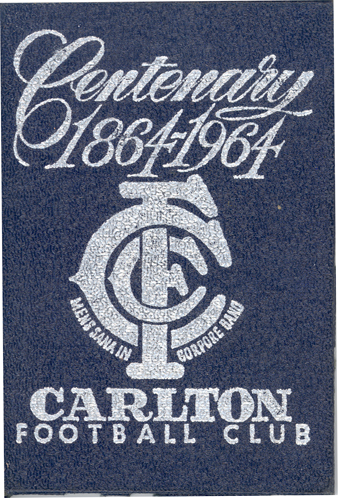 Mens Sana In Corpore Sano (Latin: A Sound Mind in a Healthy Body)
This has been the Carlton Cricket Club's motto since it's inception and was inscribed around the cricket club's pavilion clock.
(In 1903 Jack Worrall wanting a message to send to his players, suggested to the committee to adopt the saying.
It therefore became the motto of the Carlton Football Club.)

After a Carlton victory against Essendon at the East Melbourne Cricket ground in 1889 the Melbourne Punch, August 29 (p139) wrote;
"Be it known by these presents that the match wasn't over when it finished. Not half over in fact. In the upper room of the East Melbourne pavilion it was played over again by a party of seven.
This was made up of Sir Herky, the Honorary Treasurer, the Gold Medallist ( Tom Power )*, an Old Dark Blue Skipper (who with a mighty rush through the serried ranks of the foe would crush) ( This would be J. A. Donovan: Blueseum), the Commercial Traveller, Mine Host of the Duke of Wellington, and the Carlton Fat Man.
There were one or two bottles of Dry Monopole punished during the couple of hours' sitting, which passed pleasantly enough in recalling old-time reminiscences.
Strange to say, the Honorary Treasurer, the Gold Medallist, and the Fat 'Un were three of the original eight lads that started the Carlton Football Club, at the University Hotel, in 1864 - exactly a quarter of a century ago."
-*Tom Power had a saddlery business and one of his saddles won a Gold Medal at the 1889 Paris Exhibition.
The Carlton Fat Man maybe George F. Bowen who went onto become a sports writer and wrote under various non-de-plumes for newspapers.

Melbourne F.C. (Est. May 1858) and the Geelong F.C. (Est. July 1859), along with Carlton F.C. (Est. July 1864), are the three oldest clubs in the competition.
These three clubs are older than any club currently in the four divisions of the English League.
(Notts County, the oldest English League soccer club, played informally in 1862 but was not officially formed until December 7th. 1864.)

The Carlton Football Club is the only club to have competed in every season, including 1864, until the present day.
Both Melbourne and Geelong went into recess during both World Wars.
Melbourne 1916-18, and Geelong 1916, and 1942-1943.

September 10
The Argus mentions the Melbourne Amateur Athletic Sports meeting to be held and lists the day's activities.
One of these is a "Drop Kick At Football" contest.
Three contestants, one a Jack Conway, who came second with 55 yards 1 foot 8 inches, 11 inches short of the winner H.C.A. Harrison of Melbourne F.C.

No controlling body, clubs played each other according to an unwritten agreement.
Captains acted as umpires until 1870's.
Games consisted of two 50 minute halves with no change of ends-this lasted until 1870.
Two goals won a game.
If two goals were not scored, the game resumed the following week.
This changed in 1865 when a game limited to one afternoon and a draw declared if two goals were not scored.
Players in those days were not tied to a particular club. Footballers played with multiple teams and if a game was decided early, then they may have played in another match for another club.

So far, the earliest newspaper report of a game involving Carlton is a match on May 27 1865 against Melbourne Grammar on the Myall Ground.
If 1865 was the first game, it seems odd that the club would have been formed in July 1864 mid way through the football season and 10 months before actually playing.
Maybe the 1861 formation had continued and the club in 1862 had become known as the Royal Park Football Club. Early in 1864 the Carlton Cricket Club broke away from the amalgamation with Royal Park Cricket Club. Perhaps the footballers followed suit, but decided to play out the1864 season as Royal Park. In the following years quite a few Royal Park players joined the Carlton Football Club.