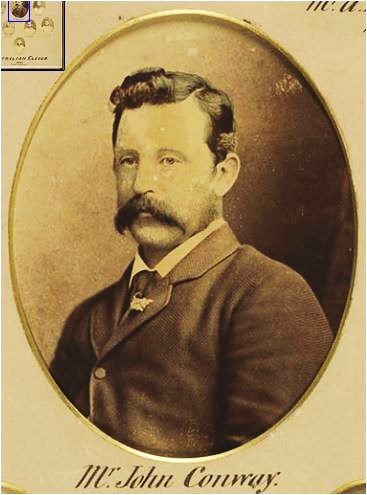 
“Jack Conway, the man who made Carlton what it is, though they never properly acknowledged it.”

("Old 'Un" - 'The Footballer' 1876 p16)
Fast forward 141 years and nothing much has changed. Conway and his other pioneering Pre VFL compatriots are still relatively unrecognised by the football hierarchies.

1870 The Record (Emerald Hill, June 22) said that Carlton's Conway who resides in Emerald Hill, and if he should play for Albert Park would certainly strengthen that club.

"He inspired, selected and managed the first white Australian cricket team to England, in 1878 - an Aboriginal X1 had gone in 1867." ( from Tony Stephens' obituary of Jack's grandson Ronald Victor Conway - Obituaries Australia)


"Hard as nails, no embonpoint, no adipose tissue, all sinew and strength."


"For years Conway led the Carlton football team, his ever-active personality serving to inspire the rollicking 'baller, as it did the more sedate cricketer." 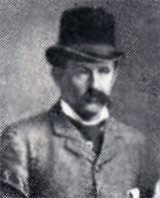 1889 August 17
Former Carlton and Geelong players played a charity game to raise funds for the local Geelong hospital.
After the game at a reception for the players, former Carlton champion Lanty O'Brien was reported in the Carlton Gazette;


"Mr. L. O'Brien while endorsing what had been said of the present state of football, regretted the absence of a man whose name was familiar to all. He referred to Jack Conway, who had done more than any man he knew, with H. C. A. Harrison, to make the game of football."


1864 September 10
J.Conway is second in a drop kicking competition in the Melbourne Amateur Athletic sports meeting at the M.C.G.
His kick of 55 yards 1 foot 8 inches (50.55M) was only 11 inches short of the winner H.C.A. Harrison ("The father of football") of the Melbourne Football Club.

1866 Captained Carlton in the last match against South Yarra.
(The Carlton Story, H.Buggy and H.Bell. p13)

Of Jack Conway the poet wrote -


"There was mighty strength in his collar bone,

And there was many a moan and a wirra! ochone!

1869 Captain and a leading player.

1869 Scored the winning goal in the first game of 1869, also scored the first goal against Melbourne on June 12 at the Melbourne ground.
(The Carlton Story, H.Buggy and H. Bell p18)

1869 September 04
Carlton captain J. Conway wrote a letter to the editor of The Leader newspaper disputing the remarks made by the Melbourne captain H. C. A. Harrison claiming the 1869 premiership for the Melbourne club.
To read Jack Conway's letter click here> 1869 and scroll down the page.

The Leader March 30 1895 (p18) its 'Cricket Gossip' column mentions Conway's illuminated address being in Sydney and that it should be returned to Carlton.
To read click here> http://nla.gov.au/nla.news-article197436832

1870 Jack Conway and Dr.J.Duncan were Carlton representatives at the drop kicking competition at the Winter Athletic Sports held on Separation Day Friday 1st. July at the M.C.G. 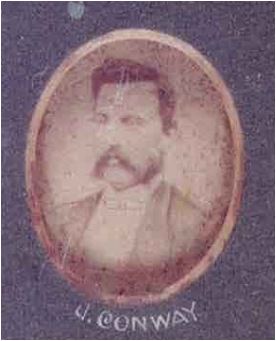 1871 May 27th; Conway captained Carlton in their 2-0 win over Geelong at Geelong. Carlton due to player absence were to field 15 men in this game.

1871 July 22
Possibly Jack Conway's last match was against Albert Park at Albert Park.
His name does not reappear in Carlton teams and J. Donovan took over the captaincy for the remainder of the season.

1871 Conway suffered an injury which prevented him from playing again.
(The Carlton Story H.Buggy and H. Bell p27)

Jack Conway,
a cricketer with bulging thighs,and knotty calves and a chest of 43 inches, was already famous in football circles as a Carlton leader who hurled himself against Harrison the Melbourne captain in the years when those two clubs were supreme.
(A Game Of Our Own. Geoffrey Blainey p39.)

Challenge Cup. Carlton vs South Yarra
September 15 1866 .
Carlton Captain J. Conway. Started match at 2.30pm with a fine place kick from centre of the ground, and soon the battle became exceedingly well contested.
For Carlton the Gormans, Williams, Guy, Hiladen, and Byrne were especially active, and at half past three the latter, by a fine running kick, succeeded in securing the first goal for his club.
Match ended in a draw at a quarter to six.
(Great Australian Football Stories, Garrie Hutchinson p17.)

Jack and his wife Elizabeth moved the family to Sydney during the 1880's. Jack was staff sports-writer for the Sydney Morning Herald and the Sydney Mail newspapers. 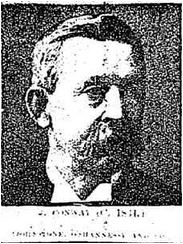 The community poet put verse to paper to pay tribute to Carlton's most revered captain Jack Conway.
The Leader of the club's kindergarten days had this accolade bestowed:

-John, of rivals you had few,

When o'er the notorious rugged ground

-you led the famed Dark Blue

You've joined in many a gallant charge

-after the flying leather,

And I often think of the good old days

-when we were boys together.'

(The History of The Carlton Football Club, Brian Hansen p18.)

1909 Jack died of heart disease at Frankston Victoria on August 22.
Buried at the Old Cemetery West Melbourne with his brother Harry/Henry and father.

Conway wrote about cricket and football for many years for the Australasian, Age, Leader, and some Sydney newspapers.

'HARD AS NAILS': Jack Conway and the Early Days of Football

Mark Pennings' 2003 story of Jack Conway
"The article draws attention to Conway's success as a player and his important role in the development of the Carlton Football Club. It discusses the football career of Jack Conway. Conway was a Melbourne Grammar School boy who went onto play for Melbourne, South Yarra, Albert Park and Carlton. Conway played football during the period of 1858 - 1871. He captained Carlton and was a major figure in the development of it's culture and ambitions. Conway was also an on field adversary of Melbourne captain H.C.A. Harrison and these two enjoyed many hard fought contests."
To read click here> www.eprints.qut.edu.au/7344/
Then click PDF (94kb)

JOHN CONWAY: 'and one man in his time plays many parts ....'

A very interesting story from www.cricketcountry.com about Jack Conway, and his part in the first official Australian cricket tour of England and North America in 1878.
'Our Jack' almost comes to blows with England's most esteemed player Dr. W. G. Grace over Grace's strange behaviour. Conway refused to allow the team play Grace's team Gloucestershire until he apologized.
http://www.cricketcountry.com/articles/john-conway-and-one-man-in-his-time-plays-many-parts-452231 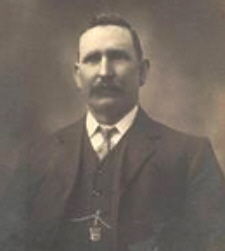 --------
Cricket
Jack Conway represented Victoria in cricket against England, and played First Class cricket 1862-1875.
(Running With The Ball, A. Mancini and G. M. Hibbins, p190)
1877 June 23 J. Conway intends to publish a book on cricket.
Jack Conway proposed and managed the first Australian Cricket Test Team to tour England in 1878 After the England cricket team was beaten on equal terms on Australian soil, he quickly suggested an Australian tour of England. He was fobbed-off and it was thought the team would run out of money and that it would have to be financed to return home. However, he went ahead and the tour was a great success and the team made money. When the ship returned to Sydney they were greeted with a public welcome no other team has, or since received.
Obituary in Sydney Morning Herald, 24th August 1909