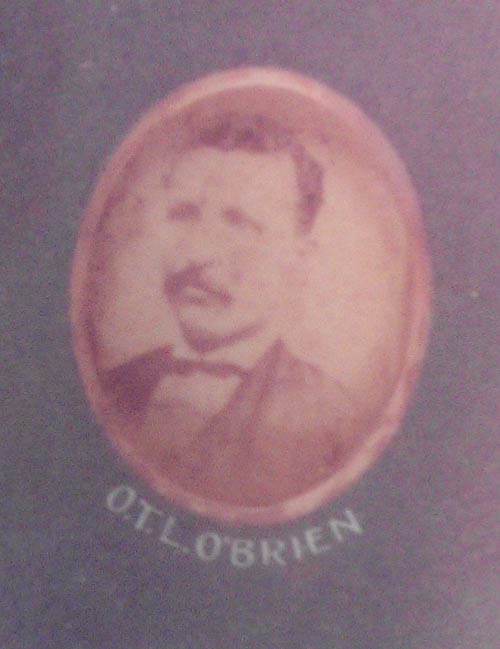 The O'Brien family was a victim of the Potato Famine in Ireland. Although relatively wealthy, the father Thomas, who was a solicitor and a land owner, was unable to support his family or his tenant farmers once the potato blight hit.
Husband and wife and seven children (Orlando being the eldest boy aged 9) set off to Melbourne via Liverpool on 5 June on the "Saldanah" (1562 tons) and arrived at Port Melbourne 17 September 1856, as part of the ship's 518 passengers. The trip took 103 days, it was found that the ship was leaking soon after departure and the captain had difficulty in keeping the ship afloat even with the aid of two pumps which were in continual operation. The ship's company's burden was finally relieved when the vessel anchored in Hobson's Bay.

.*Lanty would have been approximately 11 years of age. However the ship's passenger list had Orlando as aged 9. The Australasian reporting on his death in January 1911 said he was 65, so that would put his year of birth as 1845 or 1846.

The family's descendants are not sure where the nick-name "Lanty" came from whether it was a corruption of "Landy" short for Orlando or whether is was a newspaper mispelling which somehow stuck.
One item of interest which Lanty had kept and was handed down in the family was a copy of the first Carlton Football Club Rules. Unfortunately for all, this treasured family possession was left by his son Thomas on a train in Perth! 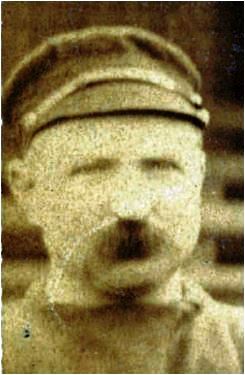 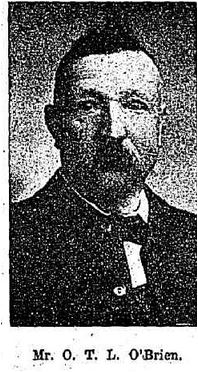 "The first and only punter for years" and among the leading player for 1867.
(Centenary Souvenir of Carlton Football Club p6)

1876 June 10
Lanty O'Brien and Harry Guy took to the field for their old club when the Blues were two players short for the game against Melbourne at Royal Park.

Described as the longest kick in the competition.
(History of The Carlton Football Club, Brian Hansen. p12.)

1908 August 15
The Age footballer writer who went under the pseudonym "Follower" wrote an article celebrating the 50 years of Australian Football.
He wrote of O'Brien;
"...and O.T.L. O'Brien ("Lanty") who joined Carlton in 1861, the year of it's formation, and who has for many years been, and still is, one of the best known officers of the Customs department, was the first man to introduce the 'punt'."
For some more information about the 1861 Carlton football club, see Formation of the Club

1910 July 02
The Argus (p5)
"Suspecting that some opium might be thrown overboard from the S. S. Empire, Mr. Orlando O'Brien, of the Customs, followed the liner down the bay in the Customs launch. A number of floating objects were observed. They recovered 20 parcels tied with string. But as each parcel was untied, nothing but a shower of dirty rice fell on the deck." - 'The Argus' Thursday


The Customs launch in the bay ran busily south,

For nobody knew what opium may be thrown

In the liner's wake to ease the watery mouth

Of the smoker lying in Dog-leg Lane alone.


"Dope on the stabboard bow!" - The launch was stayed,

And the packages fished on deck with a rod and line,

But lo! when the string was cut, I am half afraid

That a Word fell crisp from the lips of Lanty O'Brine.


For never a bit of the good brown stuff was seen,

Theer was naught for even a Dog-leg Laner's smoke,

And the old Orlando gazed with an angry mien,

While somebody said: "The beggars 'ave 'ad their joke."

But by-and-by there maybe a terrible shine

When somebody else is paid (with interest due)

For the joke the Chinamen worked on Lanty O'Brine.

(From The Passing Show by Oriel)

1911 January 20 Friday
The Age in it's News of the Day, in part, said,
"In his younger days Mr. O'Brien was one of Melbourne's champion footballers. He was a member of the original Carlton team, and the "inventor" of the "punt" kick. He leaves a widow and grown up children."

1911 January 21
The funeral of Lanty O'Brien proceeded from the Customhouse Wiliamstown, via train to the North Melbourne station then to the Melbourne General Cemetery.

1911 January 21
"Old Carltonians will read with much regret the announcement of the death of O. T. L. O'Brien. he was a well known footballer in the early days of the Carlton Football Club, and 'Lanty' and his 'punt' in the course of seasons became familiar as household words. In the Carlton pavilion there is a group of old footballers and amongst them is 'Lanty.' Looking at his photo, you would say that he, at all events was ready for the fray. 'Fierce in his eye the fire of valour burns.' Everyone liked him. He was a fine, manly player, game as a pebble, and full of kindly spirit and good nature. In short, he was one of the best of all good fellows. He played with Harry Guy, Tom Gorman, W. Williams /Bill Williams, W. Monie /Billy Monie, Tom McCarthy, Frank Willsden /Frank Hillsden, George Robertson, Colonel Robertson /Robert Robertson, Billy Lacey, M. Webb /Mick Webb, and even C. Forrester /Charles Forrester and J. Byrne /James Byrne were Carltonians when 'Lanty' first wore the orange cap of Carlton, in the sixties. His death was due to a chill and resulting complications. he attained the age of 65 years."
("Felix" Australasian p24)

1911 January 23
The Adelaide Advertiser reported "Lanty" O'Brien's death.
"Mr. O'Brien was formerly one of Melbourne's champion footballers.
He was a member of the original Carlton team, and the "inventor" of the "punt" kick."

"Mr. T. O'Brien of the Post Office Cricket Club, has just received news of the death of his father, Mr. Orlando O'Brien, better known to sportsmen, and particularly footballers, as "Lanty" O'Brien.
The deceased gentleman was one of the originators of the Australian game of football, and he was captain of the first team to proceed to New South Wales in 1878, with the object of introducing the game into that state.
He occupied at one time the position of captain of the Melbourne Football Club, and also led the Carlton team to victory on many occasions.
He was an all round sportsman, an adept at handball, and in one year he won the Civil Service Cup for rowing. He was always known in football circles at the "left punt kick."
Mr. O'Brien had occupied the position of Chief Tide Inspector of Customs for 20 years, and he had been altogether 42 years in the service of the Government.
It was his intention at 60 years of age to tour the world, but he was so hale and hearty at that age that the trip was postponed, and after six weeks of illness he died at the age of 65 years.
The deceased gentleman was noted for the number of lives he had saved in Hobson's Bay.
He always made his bed under the telephone, and was ever ready to render assistance when called upon.
Mr. O'Brien leaves three daughters and three sons to mourn the loss of an estimable father, and he will be sadly missed in shipping circles in Victoria."

More than 150 years have passed since Lanty O'Brien's first connection with the Carlton Football Club. Late in 2015 Lanty's great, great, great grand daughter Emily Angwin was appointed as Carlton's Media Presenter. Although she is a Collingwood supporter, Lanty would have been bemused, as the present Collingwood club was at least a further 28 years into the future when he first played the game for Carlton.
To read club historian Tony De Bolfo's article click here> http://www.carltonfc.com.au/news/2016-03-03/emilys-kindred-links-with-carlton-great-lanty