1866 June 9
C. Forrester named as an emergency for Carlton in the Challenge Cup match against South Yarra at South Yarra.

At the end of 1867 season, Forrester played in a combined side from North of the Yarra.
Ten players from each of Carlton and Melbourne against ten each from Emerald Hill (South Melbourne) and South Yarra clubs.

1868. Following internal dissension in the Carlton club, James Byrne, Harry Chadwick the first captain of the Dark Blues, and Charles Forrester, later a vice president of the Melbourne Cricket Club, transferred to Melbourne.

1893 January 14
The Australasian's cricket writer "Felix" (p17) says;
"Do you remember that old tree under which Charlie Forrester used to stand immoveable as the tree itself against all comers"
"C. Forrester, you know, was as good at cricket as at football, and his lion hitting against South Melbourne in the old cup matches is still freshly remembered, for did he not hit George Major for 20 in one over, and score 54 in 20 minutes by old Mac's clock at East Melbourne?"

1893 May 25
Original Carlton player George F. Bowen writing under the name of "Olympus" in the Melbourne Punch mentions that Charles Forrester and William Finlay both crossed to Melbourne, which would been 1869. The Carlton Story says Forrester crossed with Harry Chadwick and James Byrne.
Bowen says it was Chadwick, Byrne and Dave Adamson who went to Melbourne and Finlay and Forrester went the following year. 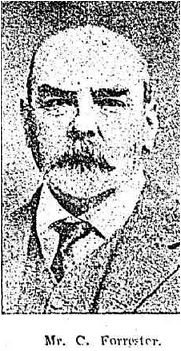 The Argus August 12 1932, "Old Boy" writing about past players quotes from "The Footballer" about Forrester;
"Charles Forrester - (Melbourne) "Is a very cool player, always keeps his place, does a lot work, is a sure mark and seldom fails in his kicking."