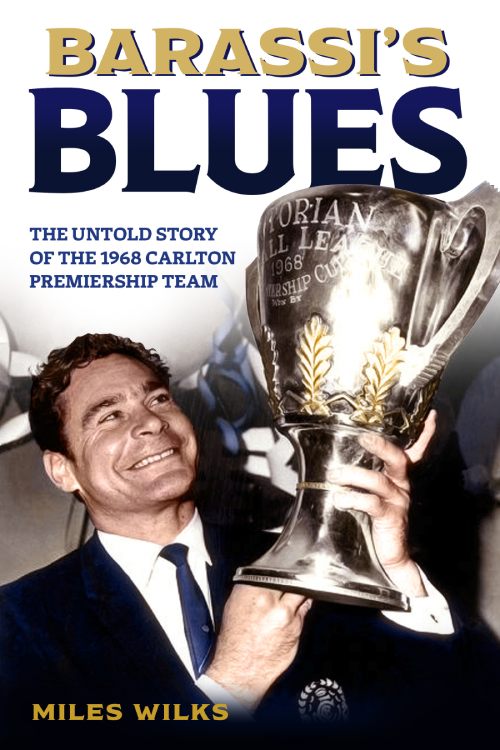 Barassi’s Blues is a book about Carlton’s journey towards premiership success in 1968 under the leadership of Ron Barassi. The author Miles Wilks sat down for a question and answer interview to outline the features of the book for Blueseum readers.

Question 1: What are the key features to this book that Carlton supporters should be aware of?
One of the key features of the book is the use of rarely seen photographs. There are over 170 images of the greats of Carlton from this premiership team of 1968. Some of these images came directly from the collections of the players such as Garry Crane, Bryan Quirk & John Goold. All up, it took over two years to accrue all of the images from various sources. Well over 100 of these images have never been utilised in a book previously so the aim was to make it visually appealing.
Other features of the book include an appraisal of the rivalry with Richmond and a closer look at the career of Gary Crane, who was best on ground in the 1968 Grand Final.

Question 2: How much does Jesaulenko feature in this book?
Jesaulenko is a key part of this book. There is an outline of his journey from Canberra to Carlton and there is even a copy of a Canberra newspaper article about the incident when a lorry driver collided with Alex when he was just seven years of age. The history of Carlton might have been entirely different if that lorry driver caused more severe injuries to a young Alex Jesaulenko.

Question 3: What did you find out about Ron Barassi as a coach?
Barassi was driven and determined, yet he also was tactically astute. That part of his career is overlooked. For example, to put Ian Collins in the back pocket was a masterstroke as he had played most of the previous year in the centre. That one decision alone was highly impactful on Carlton’s season.
Barassi knew when to make team changes and regularly shuffled his players around on the forward line to get the best result.

Question 4: As photographs are a key element to this book, what are the best photos or the ones you valued the most?
I particularly like the Barry Gill photo of him after the Grand Final drinking out of the cup whilst surrounded by fans and Carlton stalwarts in the change rooms of the MCG. The lap of honour photos also had an impact as I hadn’t seen them previously in other books.

Question 5: Why should we know more about Brian Kekovich?
Kekovich is the great mystery player in this team. He kicked four goals out of Carlton’s total of seven goals in the Grand Final and yet almost nothing is known about him. I wanted to redress this and give him kudos for his significant contribution to the Carlton Football Club.

Question 6: Why is the 1968 Grand Final considered such a poor grand final and why do you think differently?
It is written off almost universally as a poor grand final due to the low scoring. Yet I have a different outlook. The match was well contested and in the last quarter in particular there were some great highlights.
So if you want the definitive take on Barassi’s first successful venture at Carlton, Barassi’s Blues is an essential purchase.