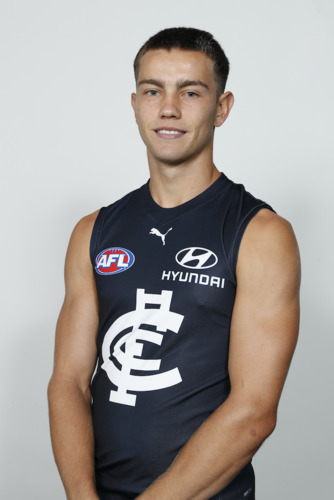 With Pick 41, the Blues snared an absolute bargain as Jack Carroll remained on the board. The classy West Australian midfielder may not have been in Carlton’s plans leading into the event, but proved too good to pass up at that range – especially given he was said to have first round suitors. After cutting his teeth on a wing and off half-back, the 188cm prospect transitioned to the inside this season and became a terrific contested ball winner. His clean hands, agility, and class on the ball point towards great upside and he should have plenty of development left being a December birth. Jack Carroll proved one of the steals of the draft as Carlton took little time in taking him off the board with pick 41. The classy West Australian was said to have first round suitors, but adds some terrific late value for the Blues as a balanced kind of midfielder who uses the ball excellently and has promising athleticism.

After a solid year in the 2's, a strong month at the start of 2022 saw Carroll selected to debut in Round 7. 5 senior games in our oh-so-close-fo-finals-redemption year was a good sign of things to come...

Not to be confused with Jack Carroll from the VFA!