A star from WA robbed of a flag by injury. 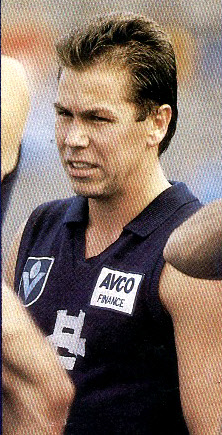 Widely regarded as one of the most worthy of Blues never to have played in a Carlton Premiership team, Wayne Anthony Blackwell spent seven seasons at Princes Park after being recruited from Claremont, WA in 1984. Although relatively lightly-framed at 179 cm and 76 kg, Blackwell was a tenacious and effective midfield weapon throughout his 110-game career in Carlton's guernsey number 8.

Born in Leicester, UK in 1960, Blackwell arrived in WA as a toddler. Growing up, he embraced Australian football and played his first senior WAFL match for Claremont in 1978 - before his eighteenth birthday. Within three years he was appointed vice-captain of the Tigers, and his dominance of the centre in Claremont’s 1981 WAFL Grand Final victory over South Fremantle convinced former Carlton champion Ken Hunter that he was something special.

Hunter urged the Blues to recruit Blackwell, and by 1984 Wayne was at Princes Park, making his senior debut in a spectacular win by Carlton over North Melbourne at Waverley Park in the opening round of the season. The Shinboners were smashed by a record 137 points on that sunny afternoon, when Carlton captain Wayne Johnston and beanpole ruckman Justin Madden kicked five goals each. However, it was Blackwell’s fellow West Australian in Warren Ralph – also making his debut for the Blues – who stole the headlines with 9 goals at full-forward in a stunning first-up performance.

Blackwell proved handy in a number of roles in his first year, in the centre, at half-forward or ruck-roving, and was awarded Carlton’s Best First Year Player award. He also experienced the heady atmosphere of VFL finals football for the first time, with a solid game on a wing in Carlton’s 25-point Semi Final loss to Collingwood. Wayne also made his mark in interstate games, and eventually represented WA on eight occasions - highlighted by his contribution in the closing stages of WA's 3-point win over Victoria at Subiaco in 1986, when his desperate smother in the dying moments denied Brian Royal what could have been the winning goal for the Vics.

By that time, Blackwell was an integral member of a strong Carlton side that wound up third on the ladder after the home and away rounds of 1986, and battled its way through to a Grand Final clash with Hawthorn. Wayne was selected as a ruck-rover in that decider, but filled his customary role on a wing as the Hawks proved too good by 42 points. At least some consolation for that loss came when Blackwell was named in the VFL Team of the Year, before finishing a close third in the voting for Carlton’s Best and Fairest player award behind the dual winners, Wayne Johnston and Craig Bradley.

Fresh from that breakout season, Blackwell held high hopes for a big 1987, but it was not to be. In February, he strained a knee ligament during pre-season training, then tried to play round 1 in the Reserves - only to break down again and miss another ten games. From then on, he struggled to get match-fit, as the Blues went on to exact sweet revenge on Hawthorn by winning the 1987 Premiership. In Carlton’s Annual Report for that year, it is written; "Injury has hindered the performance of the rugged Blackwell this year, restricting him to only three senior games. Since joining the Blues, Blackwell (27), has been one of our best ball-getters and prime movers. After injuring a knee earlier this year, Blackwell, who has played 66 games, came back late in the season, but lacked match fitness."

Recovered at last, Wayne played 24 games and kicked 16 goals in a welcome return to his best form in 1988, although Carlton was knocked out of the finals after a bitterly-disappointing Preliminary Final loss to Melbourne. Blackwell averaged 21 possessions a game for the Blues, rating him second overall behind Craig Bradley. His tally of 37 tackles was exceeded only by Wayne Johnston, and he booted four goals in a match on two occasions.

Afterwards however, Blackwell’s sixth season in 1989 panned out very much as it had two years beforehand. Injury in the pre-season delayed his first appearance until round 4, and further problems late in the year restricted him to only nine games. He battled injury almost constantly thereafter, until a severe groin strain ended his career after round 15, 1990, when Carlton suffered a big defeat by Collingwood at Waverley. Another popular midfield warrior for the Blues in Jim Buckley also bowed out that afternoon.

From there, Blackwell moved into coaching when he was appointed captain-coach of Portland in the strong Western Border League. He took the Tigers to the 1991 Premiership in his first year, and to the finals again in ’92 and ’93. Over the next dozen seasons, he coached a number of teams across the country, including QAFL club North Brisbane, and Perth and East Fremantle in the WAFL - taking Easts into a Grand Final in his first year. Business pressures eventually forced him out of full-time coaching, but in 2005 Blackwell was appointed as an assistant at Swan Districts, while also working as a football commentator on Perth radio. Later still, he returned once more to Claremont as coach of the Under-18 Colts squad.

Carlton took Wayne’s 17 year-old son, Luke Blackwell, as a third-round selection in the 2004 AFL National Draft under the father-son rule. A broken jaw late in 2005 delayed Luke’s debut that season, but he eventually played his first game in round 8, 2006, against St Kilda at the MCG, and went on to play 23 games for Carlton over three seasons.

When he was delisted in 2008, Luke continued the family tradition by returning to Claremont. He won the Sandover Medal as Best and Fairest in the WAFL in 2011, and starred in the Tigers’ Premiership victory. 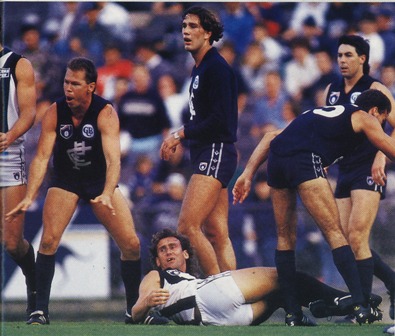