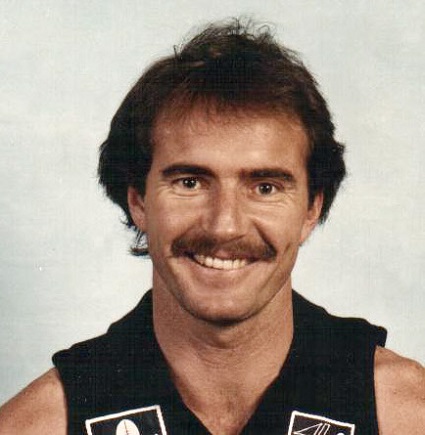 Ken Hunter was already 23 years old when he was recruited to Carlton from Claremont, WA in 1981, rasied in Carlisle WA, and was originally recruited from Dalkeith Juniors by Claremont. A seasoned, two-time All Australian defender, he had finished runner-up to champion ruckman Graham Moss three years in succession as Claremont’s Best and Fairest. Over the same period, he had suffered a broken jaw on three separate occasions, while earning widespread acclaim for his aerial ability and his outstanding bravery in marking contests. Hunter would play 99 games with Claremont and kick 23 goals in his time playing with the Tigers.

Two other VFL clubs in North Melbourne and Richmond had previously shown interest in Hunter, but both clubs ultimately decided that at 183 cm and only 76 kg, he was just too lightly-framed for the rigours of VFL football. Indeed, Richmond’s President at that time, Ian Wilson – when he heard that Carlton had signed Hunter - was even quoted as saying that Richmond “doesn’t recruit half-back flankers.” That comment was to haunt Wilson for a decade, as Ken went on to forge a magnificent career in Navy Blue.

To a whole generation of Carlton supporters, Kenny quickly became a synonym for courage . With his spindly frame, his socks down around his ankles and his trademark mop of unruly hair, Hunter ran into, and flew over packs from all angles to take spectacular marks week after week. Absolutely fearless in his pursuit of the football, he never shirked the fiercest of physical clashes. Fans winced often during games when he launched himself at the ball from impossible angles, only to be sent cart-wheeling to the turf - but like the India rubber man, Kenny always bounced back.

His talent demanded an immediate place in Carlton’s star-studded team, and there have been fewer debuts on a bigger stage than the one that faced him at Waverley Park in the opening round of the 1981 season, when the reigning premiers Richmond faced the 1979 champions Carlton. In guernsey number 9, Hunter lined up in a back pocket, alongside Geoff Southby and Des English to complete an illustrious last line. Three other debutantes in Peter Bosustow, Denis Lenaghan and Mario Bortolotto also strode the big stage for the first time that afternoon, as the Blues got off to a dream start in smashing the Tigers by 62 points.

By August of that year, Carlton had claimed the minor premiership ahead of Collingwood, Geelong, Essendon and Fitzroy, and the only drawback to the Blues impressive Semi Final win over Geelong was a thigh injury suffered by champion full-back Geoff Southby – a blow that ruled him out of the Grand Final clash against the Magpies, and left a worrying hole in Carlton’s defence.

Scott Howell was chosen to replace Southby for the decider, and covered himself in glory by controlling Collingwood’s Brownlow Medallist Len Thompson; but it was Carlton’s dynamic half-back line of Bruce Doull, Ken Hunter and Wayne Harmes – aided by the inspirational ruck work of skipper Mike Fitzpatrick, that got the Navy Blues home by 20 points in one of the great Grand Finals. After just 23 games for his new club, Hunter topped off a superb debut season by winning Carlton’s Best and Fairest award, and having the honour of seeing his name added to the number 9 locker at Princes Park. Already, he was Carlton’s new folk hero.

Kenny won his second Premiership medal in 1982 when the Blues’ class, flexibility and superb fitness got them home in another ferocious Grand Final clash against Richmond. Hunter was again a star throughout the finals, although he seemed to be in dire trouble when he was pole-axed by Richmond’s Jim Jess in the opening minutes of the flag decider. All but knocked out cold, he was sent forward to recover, kicked an important pressure goal on the run, then returned to the backline to be one of Carlton’s second-half heroes. The Blues beat the top-heavy Tigers by 18 points, and Hunter’s career reached another level when he was named an All Australian for the third time.

Hunter began 1983 in absolutely spectacular fashion when he took one of the all-time great marks in Carlton’s blockbuster rematch against the Tigers at Princes Park in round one. Running back hard with the ball coming in high over his right shoulder, Kenny must have known that the pack was charging straight at him, and that an horrendous collision was inevitable. But somehow, at the precise moment, he leapt into the air, twisted his body in flight, and plucked the Sherrin out of the sky as bodies tumbled all around him and he miraculously emerged unscathed. It was insanely brave, it was spectacular, and it deservedly won him the Mark of the Year.

Sometime shortly after that brilliant solo effort, Hunter began being troubled by a hip complaint that would plague him for the rest of his career. Consequently, Carlton coach David Parkin released Kenny into a ruck-roving or pinch-hitting forward role, and very soon he was being described as the most valuable and effective utility in the game. Setting a new personal best, he kicked seven goals in Carlton’s big win over North Melbourne in round 21, and five in the Blues’ disappointing loss to Essendon in the Elimination Final. Although a natural defender, he had proved that he was a very reliable set shot for goal, and his 43.17 for the year added Carlton’s Leading Goalkicker award – as well as another All Australian guernsey - to his already crowded trophy cabinet.

In 1984 Kenny was appointed club vice-captain, and served under three captains - Wayne Johnston, Mark Maclure and Stephen Kernahan – in successive seasons. In June 1984, with Johnston out injured, Hunter stepped up to lead the Blues, and did superbly - booting eight telling goals against Footscray at Princes Park. Carlton thrashed the Bulldogs by 34 points that afternoon, while another future Premiership star in Peter Dean played the first match of his fine career.

Hunter’s third Grand Final appearance came in 1986, and was a disaster. Having earlier strained a hamstring during Carlton’s gutsy victory over Sydney in the Qualifying Final, Kenny was rushed back into the line up at full-forward for the Grand Final showdown against Hawthorn. But he wasn’t right from the outset, and the Hawks hammered a depleted Carlton by six goals on a bad day for the Blues.

Thankfully, revenge wasn’t long in coming for Hunter, or his wounded club. Precisely twelve months later, when Carlton and Hawthorn faced off in yet another Grand Final, Kenny was fit and the Blues were primed for payback. Hunter began at half-forward, before switching to a sweeping defensive role, and the Blues demolished the Hawks by 33 points on the hottest Grand Final day on record. Kenny’s third flag (and Carlton’s fifteenth) was a victory built on the Blues tight, cohesive defence, led by David Rhys-Jones, Hunter and the magnificent Stephen Silvagni. 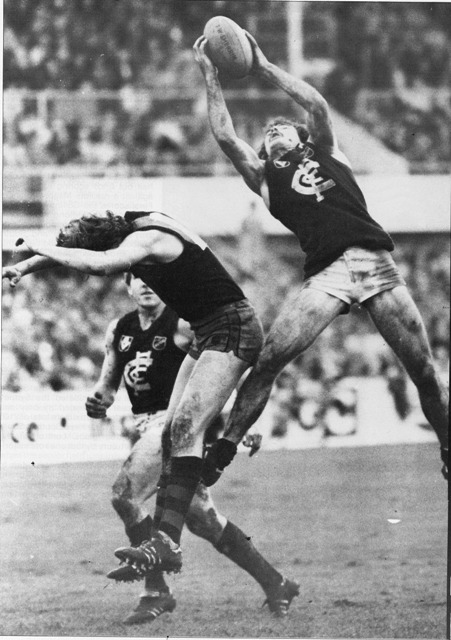 Kenny’s eighth VFL season in 1988 began with a bang, when he hosted a forward’s clinic at Princes Park in round 2, and kicked six goals against the hapless Brisbane Bears. By late in that year, Carlton were comfortably on course for another finals campaign until round 19, when injuries to key players – including Hunter - gave the Blues the staggers. Kenny’s hip problem had flared again, and his ankles and calf muscles were increasingly battle-fatigued. He couldn’t play at all throughout September, and although Carlton wound up in a solid third place on the ladder and knocked Collingwood out of the Qualifying Final, successive defeats by Hawthorn and Melbourne destroyed any hopes of back to back flags.

Season 1989 also began poorly for the Navy Blues, while Hunter continued to be frustrated by nagging injury concerns, and the team suffered a string of early defeats. Eventually, after copping a 54-point hiding from Hawthorn at Waverley Park on the day after his 32nd birthday, Ken bowed to the inevitable. He underwent hip surgery with the intention of playing on, but it was soon evident that prolonging his career was out of the question, and he announced his retirement before the year was out.

At the finish, Ken Hunter had played 147 games for Carlton, and kicked 160 goals in nine seasons. Like his former team-mate and co-defender Bruce Doull, he was universally respected by friend and foe alike, and farewelled with genuine affection from all corners of the national game.

In 1991, Ken briefly returned to WA as coach of the Reserves at Perth Football Club, but a family illness cut short his tenure and he was back in Victoria within two years. In 1993 he was appointed to the Board at Carlton, and served the Navy Blues in that capacity for a decade. Meanwhile, his post-career honours kept rolling in. In 1998, Ken was inducted into the Carlton Hall of Fame, and two years later, he was somewhat controversially named on the interchange bench in Carlton's Team of the Century. Undoubtedly, he would have been in the starting line-up at any other club.

A huge honour was bestowed upon the great Ken Hunter when he was inducted into the AFL's Hall of Fame during the 2019 season.