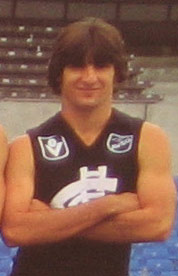 His playing career may have been almost completely overshadowed by two other AFL identities with the same name - 2004 Port Adelaide Premiership coach Mark M. Williams, and 2008 Hawthorn Premiership forward Mark L. Williams - but Carlton’s Mark Patrick Williams spent six loyal seasons at Princes Park from 1983 to 1988, and more than 20 years later, he was still coaching at elite level.

The son of former Blue John Williams, Mark first pulled on the navy blue strip in 1975, as a member of Carlton’s Little League squad. Later, he began his career proper at Carlton with the Under 19 team, after coming under notice as a lively schoolboy forward at St Mark’s College at Fawkner. By 1983 he was a regular half-forward flanker in the Blues strong Reserves team, and was promoted to the seniors for the first time in mid-June, when Carlton hosted Footscray. Wearing guernsey number 39, he lined up at half-back alongside champion Bruce Doull, and had an easy day of it as the dominant Blues won by a mammoth 89 points. Jim Buckley, Ken Hunter and Peter Bosustow kicked 14 goals between them on a good afternoon for the Blues.

Mark went on to play another four games in his debut year, kicking his first two senior-level goals in a huge win by the Blues over St Kilda in round 19. He wasn’t selected in Carlton’s losing Elimination Final team, but still finished off a memorable season when he was awarded the club’s Best First Year Player trophy.

From then on however, although he was a consistent contributor at Reserves level (playing 126 reserves games in total), Mark played only 14 more senior matches in five seasons. He was at half-forward in Carlton Reserves’ 1986-87 Premiership double, before asking for - and being granted - a transfer to Footscray in 1989. At the Western Oval, Williams managed 14 games for the Bulldogs over 1989-90, before heading to Coburg in the VFA in 1991 to finish off his playing career. He would then move to Sandringham in 1992, where he played two seasons and was part of the 1992 premiership team.

Afterwards, Williams was appointed senior coach at VFL club Preston from to 1998 to 2003, during which time he oversaw the club’s amalgamation with Carlton, and its transition into the Northern Bullants. In 2004 he was appointed senior coach at Sandringham with immediate success, taking the Zebras to three successive Premierships in 2004-05-06. Whilst at Sandringham, he combined his duties with the role of development coach at the Melbourne Football Club. After eight seasons with the Demons, Mark moved on again in 2011, crossing to Richmond as a senior assistant to Damien Hardwick.

He was inducted into the Sandringham Football Club Hall of Fame in 2014.

Williams also wore Guernsey no. 45 with Carlton Reserves in 1982.

Mil Hanna breaks away in defence.jpg