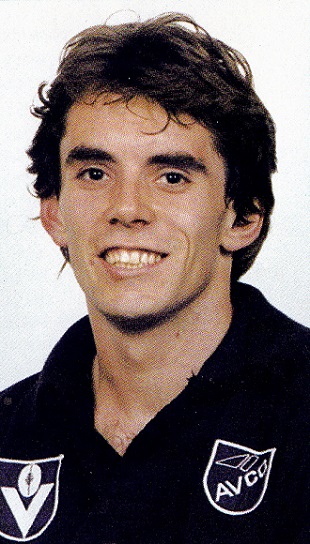 Wearing guernsey #35, the 174cm Leneghan was another talented midfielder recruited from Sandhurst (Bendigo League), he also played at Pennant Hills NSW and Bendigo YCW. In 1979 and played his first senior game at the start of 1981 and was doing well until an ankle injury put him out for a few weeks. An unlucky setback for a young player whose pre-season form had been impressive. He has been described as the fittest player that coach David Parkin has ever trained. Lenaghan was a quick skillful on-baller who was trying to beak into one of the most talented mid-field combinations ever assembled, not just at Carlton but in the VFL/AFL competition, the Blues famed Mosquito Fleet in which had quite few super-stars that like Denis came from the Blues country recruiting goldmine the Bendigo zone.

Lenaghan left the Blues for the Cats as a swap for David Honybun who was zoned to Geelong. Denis' younger brother Michael Lenaghan played with Carlton reserves, but would also join Denis at Geelong where he tasted senior football. Denis would played a further 16 games and boot 19 goals over the next two seasons with the Cats between 1983 to 1984.

Carlton rover Jim Buckley would have been an interested spectator at the match against Hawthorn on Saturday (Rd 2 1981). Buckley, who had been in dispute with the Blues and even sought a release to Essendon, would have been impressed with the form of 22-year old rover Denis Lenaghan. The newcomer's form was further proof that no-one's place in a team can be taken for granted. Lenaghan had a few minutes run in the match against Richmond the previous week, but really grabbed his chance when Alex Marcou pulled out of Saturday's game because of a hamstring strain. Lenaghan showed great pace and fine skills, his shooting for goal letting him down a couple of times. However, coach David Parkin was full of praise for his newcomer. Parkin described Lenaghan as the best track worker at the club. In fact, Parkin said Lenaghan's dedication was about the best he had seen from a footballer. Parkin has a points system for pre-season work and Lenaghan defeated an old Parkin mark, set by former Hawk and current Tiger Barry Rowlings several years ago. Patience and hard work certainly paid handsome dividends for the dedicated Lenaghan, who originally came from Sandhurst in the Bendigo League. - Jim Main Inside Football April 9, 1981.

Lenaghan wore No.51 in 1979 whilst playing with Carlton's reserves team.