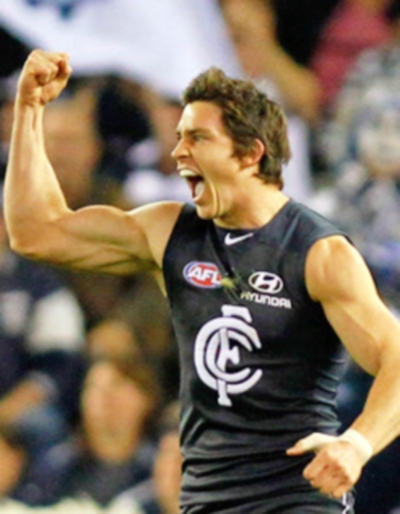 
South Australian defender Nicholas Duigan (pronounced “Dye-gun”) was recruited by Carlton at number 70 in the 2010 National Draft. With four youngsters in Matthew Watson, Patrick McCarthy, Luke Mitchell and Andrew McInnes already picked up by that stage, the Blues could afford to go for a ‘smokey’ with our fifth and last pick. And that's just what we did by selecting the 26-year-old Norwood vice-captain.

One of only a handful of modern-era Blues to have made his senior debut aged 26 or older, Duigan was a classic late-developer who was never a standout at junior level, and prior to 2008 he had had a wretched run with injuries. Furthermore, he was committed to his studies – firstly at Pembroke College, and afterward at Adelaide University – while playing at Norwood. His academic diligence paid off shortly before he was recruited by Carlton too, when he was awarded a Masters degree in psychology, with a high distinction.

On the field, Nick blossomed at Norwood in 2010 under the coaching of ex-Adelaide Crows defender Nathan Bassett. At centre half-back, he was a key factor in the Redlegs’ drive to the Grand Final, where they were narrowly beaten by Centrals. Throughout the year, Duigan stood out with his pace, strong overhead marking and calm decision-making under pressure. It was openly canvassed that he was a ready-made AFL prospect, and no surprise when the Blues called his name.

On arrival at Princes Park, Duigan’s mature attitude and impressive form during the pre-season practice matches led to him being awarded the number 34 guernsey previously worn by Simon Wiggins and Ron De Iulio. He didn’t put a foot wrong in the lead-up to Carlton’s opening match of the 2011 season against Richmond, and barring injury he was always going to be part of that side. On that landmark night at the MCG, Nick shared a 20-point win over the Tigers with two other impressive first-gamers in Ed Curnow and Jeremy Laidler, as the Blues began a realistic tilt at a finals berth for a third straight season.

Nine weeks later, during Carlton’s hectic clash with Geelong in a Friday night special at the MCG, television commentator (and former Carlton champion) Robert Walls exclaimed; “there’s a bit of Ken Hunter in Duigan.” It was a huge wrap from a highly respected figure in the game, and Walls’ opinion was justified the further the season progressed. Although Carlton’s defence was often caught short by injury in the latter part of the year, Duigan, Laidler and Lachie Henderson stepped up when it counted, and were largely responsible for the Blues’ fifth place finish. Nick rounded off a remarkable 12 months by playing finals football in his debut season, and was a very popular winner of the club’s Best First Year Player award.

When Carlton’s 2012 pre-season training began, Duigan was ticking all the boxes until painful swelling in his right knee halted his preparations. Scans revealed a minor cartilage tear, and the club medical staff decided to operate immediately. That setback cost him more than a month of training, and although he went on to play 17 games for the year, the loss of those early weeks had a bigger effect than was first anticipated.

Nick’s delayed start to the season came in round 3, when he was named as the Blues substitute against Collingwood, and had the briefest of roles in an immensely satisfying 10-goal win. He played the next five games straight, but appeared to lack spark and was then rested for two weeks. The break seemed to do him good, and in early July he played his best game to date for Carlton in the return clash against the Magpies in a Friday night blockbuster at the MCG.

Aiming to limit the influence of their captain Nick Maxwell in defence for Collingwood that night, Carlton coach Brett Ratten sent Duigan to shadow the Magpie skipper; to harass him and make him accountable at all times. Nick not only carried out those instructions to the letter – he relished the space up forward, and kicked three goals in a vital win for the struggling Blues.

Buoyed by the success of that ploy, Carlton’s coaching staff tried to repeat it in the following weeks. But it was never as effective again, and Nick was given another fortnights’ respite over rounds 19 and 20. He came back into the team for the last two matches, as 2012 ended in dismay and frustration for everyone involved at Princes Park. After starting brilliantly, the Blues crashed out of contention long before the finals, and in September, Ratten was sacked and replaced by former West Coast and Collingwood Premiership coach Mick Malthouse.

On the surface, Malthouse and Duigan appeared to be similar in a number of ways. Both were hard-headed and self-disciplined, so their relationship seemed to be on solid ground from the outset – however that was not how things panned out. Duigan was included in Malthouse’s first Carlton line-up - the team that lost by a kick to Richmond at the MCG in round 1, 2013 – only to be omitted a week later to spend the next five months running around in the VFL with the Northern Blues. By August, Nick had played just one senior match for the year and his long-term future at Princes Park seemed tenuous at best.

By round 22 the wobbly Blues were sitting ninth on the AFL ladder, about to meet arch-rivals Essendon on a Saturday night at the MCG, when Andrew Walker and Matthew Kreuzer were both late withdrawals. Carlton then surprised by calling on two forgotten men in Duigan and Aaron Joseph as their replacements. Both had their moments as Essendon won in a last-kick thriller, although neither was retained for what loomed as Carlton’s last game the year – the round 23 match against Port Adelaide at Football Park.

In the week prior to that game, more sensational revelations about dodgy dealings in sports supplements at Essendon hit the headlines, before the Bombers were heavily penalised and disqualified from taking any part in the finals. Suddenly, September had arrived early for the Blues, because if they could beat the Power in Adelaide, a surprise finals place was theirs. Meanwhile, the football gods were still smiling on Nick Duigan, and about to present him with a couple of more last-minute opportunities to extend his career.

On the morning of the match in Adelaide, Heath Scotland failed a fitness test, so again, Duigan was called into the starting line-up as the Blues’ substitute. Nick watched from the bench throughout the first half, while the Blues were totally outplayed and trailed by 27 points at the long break. With no second prize on offer, Malthouse then rolled the dice. He recast his side, changed the game plan and substituted Duigan for Levi Casboult.

In a torrid second half, Nick added starch to Carlton’s defence as the Blues launched a spectacular revival, kicking four goals in the first eight minutes after half-time, then storming home to win by a cracker of a match by one point. Miraculously, Carlton had swept into the finals!

If that match will live long in the collective memory of Carlton fans, then so will the Navy Blues’ spectacular victory over Richmond in the following week’s Elimination Final. Starting at long odds against, Carlton brought three proven campaigners in Chris Judd, Heath Scotland and Brock McLean back into the team, so Duigan was one of the casualties. But yet again there were late changes, with Casboult and McLean ruled out. Duigan and Andrew McInnes came back in, setting the stage for the most significant moment in Nick Duigan’s career.

In front of an enormous crowd of almost 95,000 at the MCG, Richmond dominated the early part of the contest, to lead by 32 points deep into the second quarter. The Blues then launched another revival and – with Duigan a surprise packet up forward - brushed Richmond aside to celebrate a famous victory by 20 points. Nick took a string of excellent marks and kicked four pressure goals in his best game for the club to date, and even a bittery-disappointing defeat by Sydney in a controversial Semi Final at Homebush Stadium the following week could not take the gloss off what was a fairytale end to the season for him.

With a year remaining on his contract, Duigan survived the 2013 end of season cull and trade week, and his future at Princes Park seemed secure. But in early December, news broke that Nick had failed to resume training. His degenerative knee problem was worse than previously thought, so after much soul-searching, he had decided to retire.

Although the loss of a senior-listed player after the trade period was something of a blow to the Blues, the club retained the option of elevating a rookie to replace him, and it will not surprise to see Nick back at Princes Park in the future in an off-field player welfare or assistant coaching role.

Trivia
On 18 November 2010, Duigan became the 2000th player selected in the AFL National Draft when he was selected by the Blues.