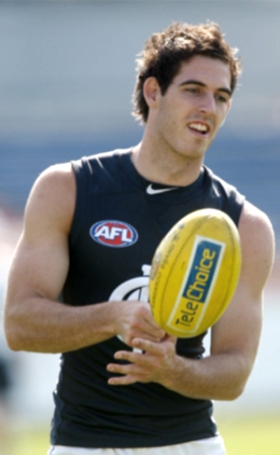 
In the wake of the 2010 trade deal that saw ruckman Sam Jacobs cleared to Adelaide in return for National Draft selections 34 and 67, Carlton used the latter to recruit Dandenong Stingrays defender Andrew McInnes, who had caught the eye of scouts from a number of AFL clubs during the TAC Cup Under-18 championships.

Quick and disciplined, McInnes was a versatile defender good enough in the air to play on tall forwards, and agile enough to cope with the smalls. He was a Victorian Country Under-18 representative in 2010, averaging 11 disposals at 91% efficiency in his three carnival matches, and was named in the back pocket of the 2010 TAC Cup Team of the Year.

In 2011, Andrew played nine games for Carlton’s VFL affiliate the Northern Bullants – averaging 12 disposals and three tackles per game - before a mid-season shoulder injury halted his progress. Back to full fitness in 2012, he put together a string of consistent efforts for the Northern Blues to earn promotion to the seniors under novel circumstances. Prior to Carlton’s Friday night blockbuster clash against top of the ladder Collingwood in round 15, senior coach Brett Ratten approached McInnes in the club gymnasium. Ratts actually came up to me during weights, Andrew said later. He started bagging me about the weight I was lifting at the start, then he said: 'What are you doing Friday night?' I said: 'I've got no plans at this stage.' He said: 'Do you want to come for a run Friday night?'

And so it was that Andrew burst through the banner and out onto the cauldron of the MCG that night to experience a dream debut, as the Blues sensationally demolished the flag favourites by 23 points in front of a crowd of 75,000. In guernsey 26 – a number worn with distinction by a long list of outstanding Blues including Jim Park, Ray Brew, Jim Clark, Graeme Anderson and David Rhys-Jones – McInnes showed plenty of poise in racking up 12 disposals, 4 marks and 5 tackles. He looked comfortable, and over the following seven weeks played like he belonged.

But then in the very first minute of Carlton’s fateful clash against the Gold Coast Suns at Carrara Stadium in late August, McInnes flew for a mark, and tore the anterior cruciate ligament in his right knee on landing. “The scary part about it was there was really nothing in it,” he said afterwards. “It was just the way I landed - my foot stayed where it was, and my knee went inwards.”

A week or two short of 12 months later – after surgery and a long stretch of rehabilitation - Andrew made a welcome return to the Blues’ senior team for another huge Friday night clash against Collingwood at the MCG in round 15, 2013. The Blues started well, and McInnes helped by drifting forward to kick his first and only career goal in the first quarter, before the Magpies exerted their authority to steamroll Carlton by 41 points. Even so, Andrew held his place in the team for seven of the remaining ten matches in 2013, including both of Carlton’s finals - a huge Elimination Final victory over Richmond, followed by a heart-breaking Semi Final defeat by Sydney.

In 2014, McInnes completed a full pre-season and was selected in Carlton’s line-up for round 1, against Port Adelaide. Played on a Sunday night at Docklands, the game was a portent of things to come for the Blues, who led by 6 points at three-quarter time, only to be over-run again and beaten by six goals. Andrew was omitted from the side after that, and spent the remainder of the season in the VFL with the Northern Blues. A number of soft-tissue injuries didn’t make things any easier for him, but his form throughout the year never quite demanded a recall, adding weight to the theory that the knee injury had taken the edge off his skills and confidence.

Meanwhile, Carlton was enduring a horror season that began with four straight losses, and ended on the thirteenth rung of the ladder. The fallout wasn’t long in coming, and in early September – barely days after the completion of the home and away rounds – McInnes was one of the first four players delisted in an end of season cleanout.

In 2015, McInnes played for Norwood in the SANFL, in 2016, he returned to Victoria and played for VFL club Frankston. The Frankston dolphins folded at the end of the 2016 season as a result McInnes headed to Karingal to play the 2017 season with.