The appointment of Michael Malthouse as senior coach of the Carlton Football Club was one of the biggest football stories of 2012. Announced on Tuesday, September 11 - the anniversary of the 2001 terrorist air attack on the World Trade Centre – the news from Princes Park overshadowed the lead-up to the second round of AFL finals, and confirmed rumours that had been swirling around both parties for months.

Already a Premiership-winning coach at West Coast (twice) and Collingwood, Malthouse had taken the Magpies to the 2011 Grand Final, before being obliged to step aside in favour of his assistant; Nathan Buckley. During the first nine months of the following year, Malthouse became a familiar figure on television, biding his time and waiting for the offers that he and everyone else knew would inevitably come. Meanwhile, over at Princes Park, Carlton had begun 2012 in spectacular fashion under their sixth-year coach Brett Ratten. Huge wins over Richmond, Brisbane and Collingwood in the first three rounds sent the Blues rocketing to flag favouritism, before a cruel spate of injuries and a mid-season form slump wrecked the team’s finals prospects.

Therefore, Malthouse was already being touted as an alternative to Ratten before embarrassing losses to bottom four clubs Port Adelaide and Gold Coast made the position of the incumbent Blues coach tenuous at best. In particular, the team’s capitulation to the Suns in round 22 at Carrara was a mortal blow to Ratten’s standing, and there was little surprise when the club terminated his contract a few days before the last game of the year against St Kilda. To his credit, Ratten insisted on coaching out the season – while the drums beating Malthouse’s summons to Princes Park reached a crescendo. Despite emphatic denials from Carlton President Stephen Kernahan - and Malthouse - that a deal had been agreed upon prior to Ratten’s dismissal, the official announcement of Carlton’s new senior coach was delayed only long enough to add at least some credibility to those claims.

So, who was this man about to join an exclusive list of just 31 individuals to have coached the Famous Old Dark Blues? Well, he was vastly experienced as both a player and senior coach, with four Premierships to his credit. Over his career he had been described as fiercely ambitious, aggressive, innovative, thorough, and a renowned disciplinarian. But he could also be prickly, quick-tempered and intolerant, regularly clashing with the football media.

Born in Ballarat, Victoria on August 17, 1953, Malthouse began his junior football career at Wendouree West, before developing into an outstanding teenage prospect at North Ballarat. In 1972 he was recruited by St Kilda, and soon found a regular place in the Saints’ defence. He was a member of all three of St Kilda’s finals teams that year, including the Preliminary Final side that lost to Carlton in a fiery contest in front of 92,000 at the MCG.

Three seasons later, St Kilda coach Allan Jeans told Malthouse that his future opportunities at St Kilda would be limited, and suggested that he find another club. Richmond snapped him up, and he went on to an illustrious career with the Tigers, playing in the back pocket in their huge Grand Final victory over Collingwood in 1980, on the way to 121 games in yellow and black. Persistent injuries ended Malthouse’s playing career in 1983, before he was somewhat surprisingly appointed as senior coach at Footscray for the following year. Brushing aside the doubters, he took the Bulldogs from seventh place in 1984 into the finals in 1985 - although that was to be Footscray’s only venture into September under his coaching. After six years at the Western Oval, Malthouse was then lured across the Nullarbor to Perth, to take on the daunting role as coach of the fledgling West Coast Eagles. He had almost instant success in the west, making himself an Eagles immortal by guiding the club to its first two flags in 1992 and ’94. 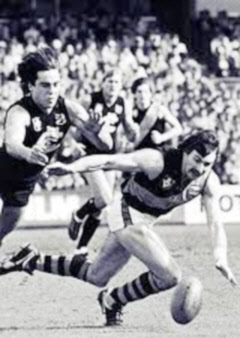 At the same time, back in Victoria, the Collingwood Football Club was struggling big time. The decade after the Magpie’s 1990 Premiership triumph had seen steady decline, until the club’s members elected football commentator and businessman Eddie McGuire as President in October 1998. McGuire, who was an unabashed admirer of Malthouse, knew the 45 year-old was out of contract at the Eagles, so he used all the influence at his disposal to persuade Mick to return to Victoria as coach of the Magpies in 1999.

Malthouse’s tenure at his third AFL club got off to an inauspicious start when Collingwood picked up the dreaded wooden spoon in his first season. But just a few years later in 2002, they played in the first of two successive losing Grand Finals against the Brisbane Lions. From then on, the black and whites were perennial finalists, ultimately breaking through for another flag in 2010. The Grand Final that year ended in a thrilling draw between Collingwood and St Kilda, with the Magpies easily winning the replay.

Even so, by then McGuire was facing a dilemma. One of the club’s modern greats, Nathan Buckley, was serving as Malthouse’s assistant, and McGuire knew that Buckley wouldn’t wait for ever to take over the top job. And if Collingwood didn’t give him an opportunity as senior coach, then a rival club probably would. Therefore, sometime during that season, McGuire insisted that a succession plan be implemented to guarantee that Buckley would coach the Magpies in 2012, with Malthouse as his mentor and advisor. All three parties eventually agreed, but it wasn’t long before Malthouse was deeply regretting his decision - especially after Collingwood made it through to yet another Grand Final in 2011, where they were well-beaten by Geelong.

Barely days after that defeat, and to nobody’s surprise, Malthouse quit Collingwood and accepted a new career as an expert commentator with the Channel 7 network. Over the following months, while his new career flourished, his relationship with McGuire deteriorated. Both men denied any rift at first, but media barbs were soon being exchanged between them. It was obvious that Malthouse still had a fire in his gut and flint in his eyes - so the situation that arose at Carlton in September 2012 was tailor-made for his resurrection as an AFL coach.

Malthouse’s first season in charge of the Navy Blues ended in unusual circumstances when a drugs scandal at Essendon saw the Bombers disqualified on the eve of the finals. Those events opened a door for ninth-placed Carlton, who needed to beat Port Adelaide at home in the last of the home and away rounds to claim Essendon’s place in the top eight. That they did in spectacular fashion, kicking eight goals in the final quarter to win by one point. In the following week’s Elimination Final against Richmond, it was a similar story. Carlton were brilliant after half-time, kicking 12.3 to 4.5 in the second half to beat the Tigers by 20 points. Malthouse’s career at Carlton peaked with that victory, because Sydney demolished the Blues in their Semi Final clash at the Olympic Stadium on the following Saturday night, and ended Carlton’s charge.

Of even greater significance after that loss was the departure of one of Carlton’s best and most popular players, Eddie Betts. The brilliant small forward had been lured home to South Australia by the Adelaide Crows, and his loss devastated Carlton’s supporter base. Throughout the next 12 months, a number of other regular senior players – Jeremy Laidler, Mitch Robinson, Jeff Garlett and Jarrad Waite among them - were to be discarded or traded as well.

Season 2014 started optimistically for the Blues as the club prepared to celebrate its 150th year of competition, but defeats in the first four rounds soon cast a pall and generated a wave of discontent that wasn’t calmed by the mid-season resignation of President Stephen Kernahan in favour of Mark LoGuidice. On the field, the team staggered through the season to finish 13th, as the groundswell of criticism of the board, the administration and coaching staff reached new levels. Carlton’s administration responded with some vigorous culling and recruiting during the off-season, and for a while, hopes of a resurrection in 2015 endured. But for the third year in succession, the Blues became the competition’s early-season punching bag and didn’t celebrate a victory until round 4 against St Kilda.

On a perfect Friday night at the MCG on May 1, 2015, history was made when Malthouse coached Carlton in his 715th VFL/AFL game against Collingwood – breaking the long-standing record of Magpie legend Jock McHale. It should have been a night of personal triumph, but turned into anything but, when the Blues were humiliated by 75 points.

Over the following three weekends, Carlton continued to struggle, losing to the previously winless Brisbane Lions at Docklands, before being smashed by GWS and Geelong. The breaking point eventually came on the Tuesday afternoon after the Geelong defeat, in the wake of a couple of separate radio interviews in which Malthouse had controversially stated that Eddie Betts had been “stitched up” by the Adelaide Crows twelve months before he left Carlton, and that “boards sack coaches when they crack under pressure”.

Previously, Carlton had released a statement to its members saying a decision would be made regarding Malthouse's future after the round 10 match against Adelaide, ahead of the club's bye. But Malthouse's comments had antagonised the board, so a lunchtime meeting was called in response to the coach's claims. Afterwards, club CEO Steven Trigg called Malthouse out of a match committee meeting into his office, and the veteran coach was told his contract was terminated. President Mark LoGiudice said the comments made by Malthouse had brought the situation to a head and the club needed to act.

"Unfortunately Mick's obvious public misalignment with the football club has resulted in a loss of trust between the club and coach," he said. “The Board today considered the situation had deteriorated to such an extent that not making a change now would only exacerbate our current position. Everyone has their own view on what he said. From a broader perspective, we thought that his views were not aligned with ours."