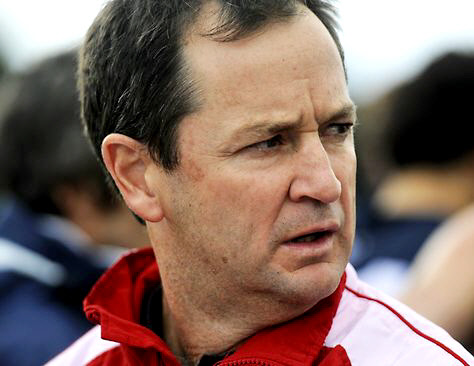 Darren Harris joined the Carlton Football Club in 2009 in the newly-created role of Development & Academy Manager. Although he had never played AFL football himself, he had built an outstanding record as a player and coach at state level in both Victoria and Western Australia over 15 years, and the Blues were determined to get him.

Harris was born in northern Victoria in 1968. He experienced his first taste of Premiership glory at the age of 19 in 1987, when the Wodonga Bulldogs won their fourth Ovens & Murray League flag. The following year he moved to Bendigo to complete his studies as a primary school teacher, and there, he transferred to Golden Square (also known as the Bulldogs). A tenacious centreman or rover, Harris helped drive Square to back-to-back flags in 1988/89, before heading back to his original club in 1991 for one last season. After winning Wodonga’s Best and Fairest that year, he jetted off to WA to join West Perth in the WAFL.

Harris quickly became a star with the Falcons, and in 1995 had a stellar year. Appointed captain, he led his team to its first Premiership since 1975, winning the Simpson Medal as Best on Ground in the Falcon’s 56-point Grand Final victory over Subiaco. A week later, amid all the jubilation, he picked up the Breckler Medal as West Perth’s Best and Fairest in a Premiership year. He then went on to captain the WAFL representative team in 1996, and was ultimately named in the West Perth Team of the Decade for 1994-2003. In all, he played five seasons for the Falcons, and was fondly farewelled when he decided to return to Victoria at the end of 1996.

Back in Wodonga, Harris caused a minor stir when he signed on as playing-coach of the Wodonga Raiders - the cross-town rivals to his former team. Leading the Raiders for three seasons, he had more success - winning the club's first and only Ovens & Murray Premiership in 1998. Two years later he moved on again, taking up an assistant and development role with the NSW/ACT Rams in the National Under-18 TAC Cup. However, the Rams were excluded from the TAC Cup at the end of 2001, when the competition reverted to its Victorian base.

Meanwhile, West Perth were once again looking for a senior coach, so Harris answered the call and crossed the Nullarbor once more to steer the Falcons to back-to-back Grand Finals in 2002 and 2003. He won yet another Premiership in 2003 with a 23-point win over Subiaco, but after 18 seasons of provincial football, the time had come for Harris to test his ability at the very highest level. Therefore, in 2006 he joined the West Coast Eagles as an assistant to John Worsfold. Sure enough, Harris’s incredible strike rate continued, and in September of that very year the Eagles snatched the Premiership when they edged out Sydney by one point in one of the great Grand Finals.

Over the following eighteen months, the Navy Blues made strong overtures to Harris, and late in 2008 he informed the Eagles that he would not be renewing his contract. Instead, he would be returning once more to Victoria, as Development & Academy Manager at Carlton under senior coach Brett Ratten.

In 2011, Harris accepted the additional role of senior coach of Carlton’s VFL affiliate, the Northern Bullants, but stepped down after one season in favour of former Collingwood and Essendon defender Robert Hyde. Hyde then abruptly resigned before mid-year, so Harris was recalled to steer the club through the remainder of their debut season as the Northern Blues.

In August 2012, Ratten was sacked as coach of Carlton, to be later replaced by Mick Malthouse. As usually happens in such circumstances, most of Ratten’s support staff also departed. Among them was Harris, who announced that he intended to take a different career path after that, by joining the prominent leadership consulting firm Leading Teams. Based in Perth, Leading Teams works with a number of AFL clubs, as well as some of Australia’s largest corporations.