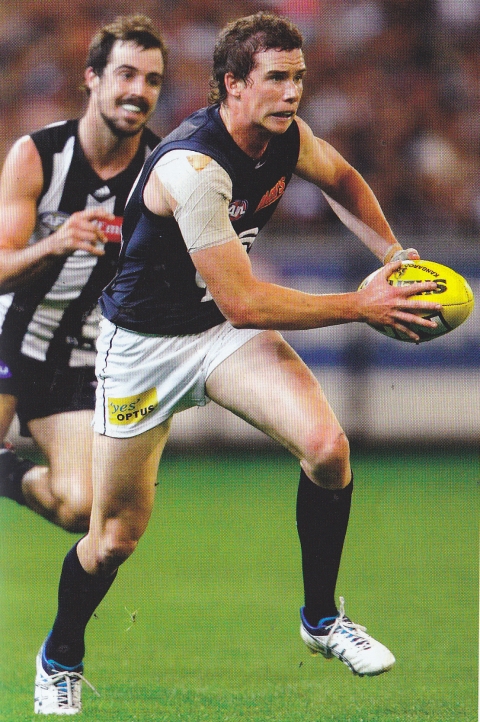 A nephew of Carlton’s 1979 Premiership wingman Peter Francis, Andy Collins was traded to the Blues by Richmond in 2010, in exchange for disgruntled midfielder Shaun Grigg.

A similar type to Grigg, Collins had been picked up by the Tigers at selection 73 in the 2006 National Draft from the Bendigo Pioneers in the elite TAC Cup Under 18 competition, having begun his football journey at Sandhurst FC via their junior feeder club Sandhurst Marist Dockers. Although hampered by osteitis pubis during his first two seasons at Tigerland, he was showing real improvement (averaging 19 possessions per game) by 2010. In round 14 of that year, during a hectic contest against Sydney, Collins was knocked senseless and helped off the ground. But with his side depleted and in trouble, he insisted on returning to the field, and kicked the winning goal to get Richmond home.

Understandably, Andrew was dismayed when the Tigers told him that he was being traded to Carlton at the end of the year. Yet to his credit, he knuckled down to the task at Princes Park, and some good early-season form with the Northern Bullants saw him promoted for his senior debut as the substitute for Carlton’s massive round 3 clash against Collingwood. Wearing the number 16 guernsey vacated by Grigg on his way to Punt Road, Collins was sent on to the ground in the third quarter to replace Andrew Walker, but was unable to have much impact as the Blues fell to the reigning Premiers by 28 points.

After holding his place for the following week - a hard-fought draw with Essendon, Collins was sent back to the VFL for round 5, where his misfortune with injury continued and a heavy collision damaged one of his shoulders. Carlton's medical staff decided that surgery was required, and that cost Andrew the rest of the 2011 season.

In 2012, after working his way back to match fitness with the re-badged Northern Blues, Collins returned to the Blues’ senior line-up at last in round 9, when Carlton played Melbourne on a Sunday afternoon at the MCG. Following an even first half, the Blues eventually shrugged off the Demons to win by 10 goals, with Collins’ 17 possessions a handy contribution. Andrew limped off the field late in the game with a knee injury, but thankfully it was only a knock, and he was able to saddle-up again the following week against Port Adelaide.

He went on to play nine matches for the year, highlighted by a 25-possession, 7-mark, 5-tackle effort against North Melbourne in round 16. Carlton then played out a horror season to finish tenth – hamstrung by injuries to key personnel, and weighed down by conjecture over the future of coach Brett Ratten. When the axe fell on Ratten in September – prior to his replacement by three-time Premiership coach Mick Malthouse – the future of a number of current players was also called into question.

In early November, Collins was officially delisted, although the club indicated that he would be considered as a candidate for either the pre-season draft or the rookie draft. An anxious few weeks ensued, until the club kept its word and redrafted him as a rookie with its second round pick (selection 24).

Asked later about the machinations surrounding the former Tiger, Carlton’s National Recruiting Manager Shane Rogers said;: "It was one of those situations where we promised to take him because he was a contracted player and we didn't want to do the wrong thing by him. The only danger was if somebody else picked him, so we did a bit of reconnaissance work and found out that we were pretty safe to get him with our second pick”.

Although he stayed injury-free in 2013, and played throughout the VFL season with the Northern Blues, Collins wasn’t able to press for senior selection again. In September of that year, he was delisted by Carlton for the second and final time.

Collins was appointed playing coach for Bridgewater in the Loddon Valley Football League for the 2014 season, he took Bridgewater to back-to-back premierships in 2014-15, in 2016 he stepped down as coach and was a player in the 2016 premiership team. Collins played with Bendigo FL club Sandhurst in the 2017 season, he took over the role as senior coach for the 2018 season.

Blueseum Trivia
Andrew's father David had played for Carlton Reserves between 1979 and 1981 after being recruited from Bridgewater. He played 26 games and booted 29 goals, then returned to the Bendigo League to play for Sandhurst.