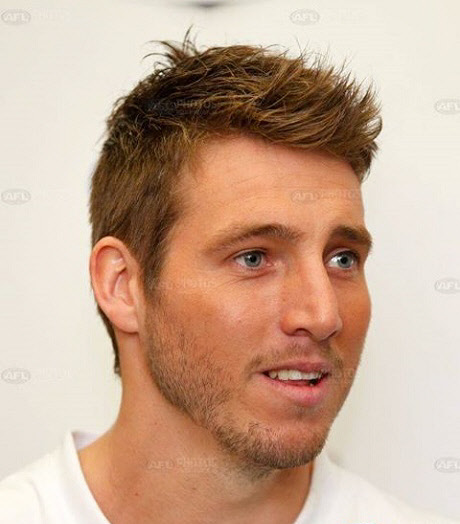 
As the impact of the AFL’s new free agency rules took effect in October 2013, Carlton was one of the first clubs to lose a star player when Eddie Betts was lured across the border to the Adelaide Crows. But only a few days later, the Navy Blues landed a big fish of their own by signing Collingwood Premiership star and All Australian Dale Thomas on a four-year deal.

Drafted by the Magpies at number 2 in the 2005 National Draft (behind current Carlton captain Marc Murphy) 26 year-old Thomas had played 157 games and kicked 121 goals in black and white. Nicknamed ‘Daisy,’ he had become a cult figure at Collingwood in 2010, when he starred in their Premiership side before finishing third in their Best and Fairest. The following year he was named as an All Australian, and touted as a future Magpie captain.

However, a serious ankle injury derailed his career in 2012, and he managed only five senior games over the following year. Rumours of a rift between Thomas and his coach Nathan Buckley emerged later in the season, and when Dale and his manager postponed negotiations over a new contract it was obvious that a move was on the cards. Meanwhile, Thomas’ Premiership coach Mick Malthouse had been lured to Princes Park. It was well known that the pair shared a strong bond, so Carlton stood out as a logical destination - if the Blues could be convinced that Thomas’ suspect ankle was fully healed. The injury was a complex one and called for specialised management, but on the day that the deal was signed, Malthouse was certain that Thomas would bring more than just his considerable talent to Carlton. “Dale is quick, hard at it, has a real presence about him, and will give us a real variety in positional play,” the veteran coach said. “He's been successful in being part of a premiership side - part of many finals campaigns - and he brings to us a personality that will blend in very well with our current group.”

Unfortunately, the optimism of those words lasted barely a month into 2014, as the Blues lost their first four matches in a prelude to a horror season. Having chosen guernsey number 39 (most famously previously worn by Ange Christou) Thomas wore it into round 1 against Port Adelaide and posted a goal with his first kick in navy blue. From there, he became increasingly valuable to the side the longer the season went. Although Carlton won only seven matches for the year, Dale averaged 17 possessions, 5 marks, two inside 50s and two rebound 50s in his 20 games. His 12 goals for the season were handy, and his top-ten placing in the Blues’ Best and Fairest was well deserved.

Heading into season 2015, Thomas was reported to be in the best condition for five years. However, in the very first minute of Carlton’s round one clash against Richmond at the MCG, he was crash-tackled and dislocated his left shoulder. Although early reports indicated that he would be sidelined for at least six weeks, he came back after five – but it was soon clear that he still wasn’t right. So with another season in tatters, the Blues booked Daisy into hospital for a full shoulder reconstruction, aiming to have him back to full fitness prior to the commencement of 2016 pre-season training.

Indeed, that was how things panned out, although when Thomas hit the training track in the new year, his mentor Malthouse had been sacked and a new senior coach in Brendon Bolton appointed. While observers pondered over Dale’s short-term future, he returned to the senior team in round 2 against Sydney, when his 25 possessions and 8 tackles put him into Carlton’s best players. Another couple of handy games through the first half of the season seemed to sway some of his doubters, especially when the Blues surprised with 6 wins in the first 11 matches.

After that however, things went pear-shaped. Through the middle stages of the season, Dale’s form fell away, and he was considered lucky to hold his place, even before a calf strain added to his long medical history and cost him another three matches. As the Blues limped toward the finish line of another wretched season, so too did Daisy, who willed his flagging body to get to contests, but all too often lacked power and penetration in his kicking. Carlton’s last game of 2016 - when Thomas reached the 200th match of his chequered career - should have been a celebration of Dale’s determination and longevity in the game. Instead, it ended in frustration and dismay once again, when the ragged Blues were demolished by a second string Essendon team on the verge of finishing last.

Thomas played 20 games in 2018 in clearly his most consistent season for the Blues. Notwithstanding everything else falling apart, Thomas played with genuine dash in a range of roles. Blues fans hope that in 2019 this leadership shines through as the Blues commence another attempt at our resurgence.

After another solid year for the Blues in 2019 the club decided not to renew Thomas's contract for the 2020 season, which to some seem surprising considering the form he was in. Thomas's final game would be his 101st game for the Blues, he would also in doing so would become the first player to notch up 100 games at both Carlton and Collingwood. Well played Daisy!!