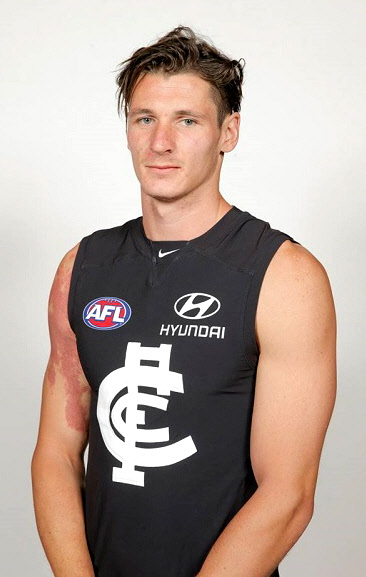 A last-minute acquisition by the Blues during the 2013 trade period, Andrejs Everitt arrived at Carlton at the age of 24, having already played a total of 79 AFL games with the Western Bulldogs and Sydney Swans. A tall utility with pace, agility and aerial strength – although sometimes prone to inconsistency - he had spent much of his career in defence. His value however was that he could also pinch-hit in the midfield, and had kicked the occasional spectacular goal.

Everitt became the fourth Swan to leave the harbour city club in the wake of Hawthorn champion Lance Franklin’s lucrative transfer barely days after the Hawks had won the 2013 flag. Andrejs was coming off the most productive season of his career, having played 20 games (including all three of Sydney’s finals) but delays in negotiating a new contract, and interest from rival clubs forced a rethink about his future. In the end, Carlton’s persistence won him over, and the Blues clinched the deal with selection 32 in the 2013 National Draft, in return for Everitt and the Swans’ pick 39. “We’re rapt actually to secure Andrejs,” Carlton Football Manager Andrew McKay said at the time. “He was keen to come back down to Melbourne, and we were very, very keen to get his services.”

During the off-season, Everitt maintained his fitness by travelling to Thailand for a gruelling kick-boxing camp. He returned home in excellent shape, and during Carlton’s pre-season training made it clear that he intended to make his debut for the Blues sooner rather than later. Sure enough, he was one of two new faces in the side (the other being Dale Thomas) when Carlton began their 2014 campaign against Port Adelaide on a Sunday night at Docklands Stadium in mid-March. Wearing guernsey number 33, Andrejs started proceedings in defence, but pushed forward in the early stages to take a strong mark inside the Blues’ attacking 50-metre arc. When his first kick for his new club sailed straight between the posts, Everitt’s career in navy blue was up and running.

He went on to play in all of Carlton’s games up to and including round 18 against North Melbourne, only to suffer damaged knee ligaments early in the second quarter. That injury prematurely ended an impressive first season for Everitt, who was consistently good in each of his 17 games, and outstanding more than once. In September, he finished equal seventh in voting for the 2014 John Nicholls Medal – sharing that honour with Chris Judd.

Everitt’s follow-up season in 2015 was even better than his first, despite the Blues enduring one of the worst years in club history. Already weakened by the off-season departure of a number of experienced players, the team was hit hard by injury from the opening round. Eventually, coach Mick Malthouse was sacked, and Carlton won only four games before finishing on the bottom of the ladder. Throughout those disastrous months, Everitt was a beacon in the darkness for the Blues as a third tall forward, playing all 22 matches and finishing the year as Carlton’s top goal-kicker, albeit with a modest total of 31 majors.

In 2016, Brendon Bolton’s appointment as senior coach brought optimism to a wounded club, and a raft of changes in everything from personnel to everyday attitudes. Some players took it all in their stride, while others were quickly told that more was expected of them. An early-season calf injury didn’t help Everitt’s cause, and while he played a couple of excellent games early in the season, most notably against Collingwood in round 7, and Geelong in round 10, his form fell away in the latter part of the year. From then on, Andrejs was in and out of the team, and although he contributed 17 goals in 13 senior appearances, the question still had to be asked – all round, was that good enough?

Unfortunately, it wasn’t. In late October of that year, Everitt was delisted by the Blues at the age of 27. A few weeks later, he announced that he would not be seeking a fourth club, and retired from the game.

2017 - Everitt decided to return to his junior club Somerville for the 2017 season as co-coach.
2019 - Everitt signed with WRFL club Parkside in Melbourne's west, but he ended up playing with rival WRFL Division 2 club Yarraville-Seddon, he would play in their premiership later that season.