Jezza booted 7 goals, as Carlton defeated St Kilda by 16 points at the MCG.

St Kilda controlled this game in the first half, but failed to capitalise on the score board. The Blues slowly wore them down, with rover Barry Armstrong and half forward Syd Jackson instrumental in getting Carlton back into the game, together with Alex Jesaulenko's 7 goals at full forward. The margin was just 4 points at time-on in the final quarter, but late majors to Greg Kennedy and Jesaulenko gave the Blues a 16 point win.
Captain-coach John Nicholls took a calculated risk by not showing his hand tactically before the rematch with the Tigers, because he believed that his team could comfortably match the Saints. Sure enough, a week later, his gamble would pay handsome dividends, and etch this side into history's pages as one of the great Grand Final teams of all time.

New boys improving
I was happy with our performance, but there is still room for improvement. We had nine players in our side who are playing in a finals series for the first time and they are finding it hard to adjust to the different style of game. This adjustment must come in stages and I am hoping today was the first stage in their improvement and next week will be the second. - John Nicholls.


Nicholls thrilled with effort.
The Blues captain-coach Big John Nicholls, will be thrilled to have won through to the Grand Final. The win was not inspiring, but the flag has still to be won, and despite Richmond's favoritism every day is a different day. Weather wise Melbourne has enjoyed the driest winter and early spring for 40 years. October is traditionally our wettest month. Would the Tigers price topple if next week's game were played in mud and slush from two inches of rain?

St Kilda despite the difficulties, the injuries to captain Ross Smith and vice-captain Bob Murray could have won the preliminary final. Reflect on the complete lack of touch of key forwards Barry Breen, suffering the effects of the flu virus and Barry Lawrence worried about his ankle. Two kicks within four minutes made the difference between winning and losing. Thirty seconds before the third-quarter siren, Barry Lawrence lined up from 35 yards, directly in front of the Punt Road goal. A goal, and the Saints would have been one point in front. Lawrence kicked miserably. The ball sailed out of bounds on the full. Three and a half minutes into the final quarter and Carlton utility Neil Chandler flashed from the centre with a weaving run, bounced twice, and then booted a 60 yard baseball curve goal to put Carlton 11 points clear. It was the first break the Blues had achieved on the Saints.

Two other factors gave Carlton the win. The most important was the placing after half-time, of Paul Hurst on St Kilda dynamo Alan Davis. It was the most effective move of the match, other than the obvious placing of Alex Jesaulenko at full-forward. St Kilda's John Manzie suffering from cramp during the third term allowed his opponent, Ian Robertson, to come into the game after half-time. Robertson's long kicking and effective handball had a telling effect.

St Kilda should have led by five goals at half-time. Carlton struggled to bridge the gap. Big John Nicholls showed the crowd and his critics he is far from a spent force. Had he not tried to give Jesaulenko two more goals he, Nicholls, would have finished with five himself. My best players were Alex Jesaulenko, centre half-back Bruce Doull and St Kilda wingman Stuart Trott. I thought both skippers led their team admirably with inspired football. The umpiring of Ian Coates was not as good as his finals performance last year and at VFL Park this year, and Bill Deller looks a certainty for next week's Grand Final.

It was a goal-post hitting day at the MCG on Saturday, both the seniors and the U/19's games endured enough to last a life time. In the main game the post was rattled four times. Surely the most unlucky poster was that of Barry Breen when his 65 yard torpedo punt hit the wooden button on top of the goal post at the scoreboard end late in the second quarter, why the need for the buttons is anyone's guess! When Stephen Theodore kicked that magnificent goal 19 minutes into the last quarter and made the difference a mere four points, it seemed as though the Saints were literally marching in. But the Blues steadied and outlasted the Saints, just! The gamebreaker,Alex Jesaulenko and Greg Kennedy kicked a goal each in the last 90 seconds of the game to seal the victory for the Blues. - Harry Beitzel; The Australian. 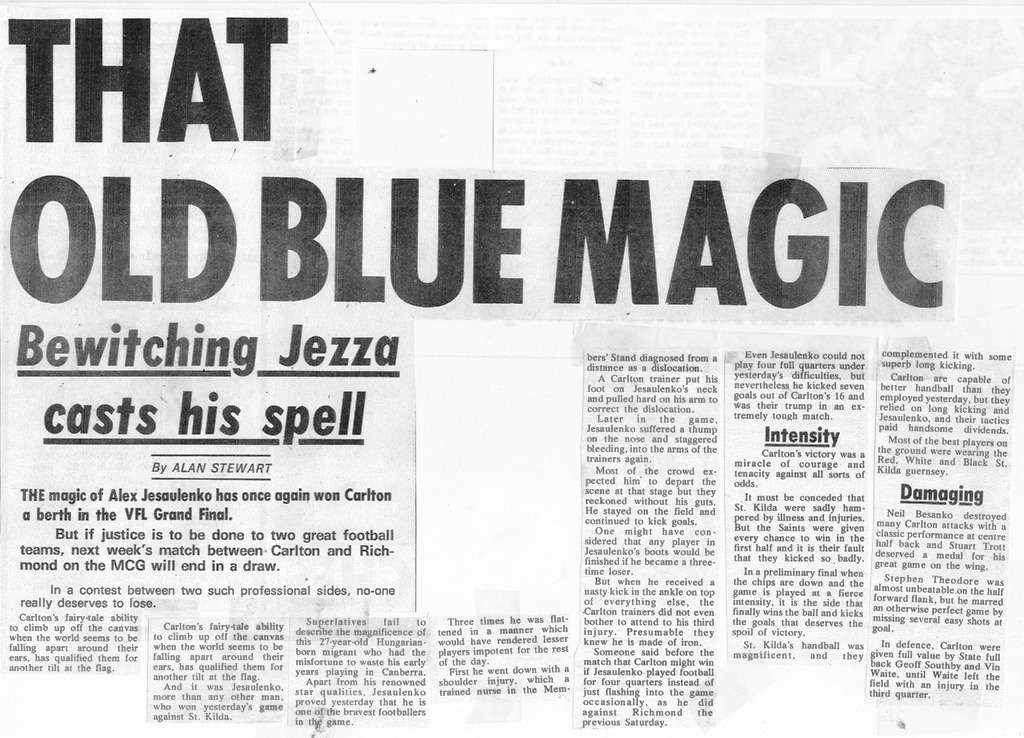