Rookie to Rising Star in his debut season. 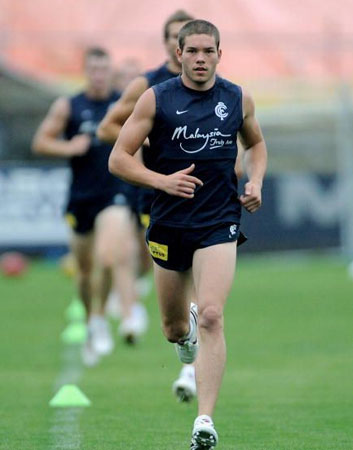 Aaron Joseph grew up in Strahan on Tasmania’s north-west coast, and played his formative football years with the Devonport and Glenorchy clubs. In 2007 he came under notice as a hard-running, courageous midfielder with the Tassie Mariners in the National Under-18 Championships, from where he won a place on the interchange bench in the All Australian team. He was surprisingly overlooked by all clubs in the 2007 AFL National Draft, but later that same year was picked up by Carlton at pick 2 in the Rookie Draft.

Joseph spent all of his first year at Princes Park finding his feet in the VFL with the Northern Bullants. Earmarked by the coaching panel as a small defender, he did all that was asked of him, and the club had no hesitation in retaining him on the rookie list for 2009. He was allocated Carlton’s guernsey number 45, which had lain dormant at Princes Park since the retirement of Anthony Franchina in 2003.

Aaron came under notice for the first time outside of the club when he was asked to tag one of the game's best players; Gary Ablett Jnr, in the 2009 NAB Cup Semi Final against Geelong. Although Ablett got a lot of the ball, Joseph stuck to his task, and none of Ablett’s possessions came cheaply. On top of his thorough pre-season preparation, that effort earned Aaron elevation to Nominated Rookie status and opened the door to senior selection.

Deservedly, that came for the first time in Carlton’s massive 2009 season opener against Richmond – a landmark game that signalled the rebirth of the Blues under the captaincy of Chris Judd. On a warm Thursday night at the MCG, Joseph was one of four new faces playing in a Carlton team that showed no mercy to a traditional rival and slaughtered the Tigers by 83 points. Alongside Michael Jamison in a back pocket, he was rock-solid in an impressive start to his AFL career.

As his debut year progressed, Joseph was handed increasingly responsible tasks which never seemed to faze him. Sent into the midfield with his team in trouble against Fremantle at Carrara in round 7, he kicked his first goal in navy blue. A month later, in round 11 against Brisbane at the Gabba, he kept in-form Lion Rhan Hooper almost kickless, then picked up 19 disposals while holding St Kilda’s dangerous goalsneak Stephen Milne to just one goal in round 12.

Aaron was awarded a Rising Star nomination after that match, and a place in the improving Carlton line-up for the rest of the year. But after finishing seventh, the Navy Blues were knocked out of flag contention in an Elimination Final by Brisbane, who overhauled a tiring Blues combination at the Gabba to win by 7 points. Joseph started on the bench that Saturday night in his finals debut, and was in the thick of the action in a torrid last quarter.

A year later, when Carlton finished off season 2010 in similar circumstances - with a desperately hard-fought 5-point Elimination Final defeat by Sydney - Joseph played his 43rd consecutive match, and for most of the year was a fixture in Carlton’s line-up. However, a tactical re-think by the coaching panel in the lead-up to 2011 was to have consequences for a number of established Blues, including the 21 year-old Apple Islander.

Carlton’s quest for additional pace, height and kicking skills in defence brought a batch of new faces to Princes Park in the off-season, including Jeremy Laidler from Geelong, and Nick Duigan from Norwood. As well, established speedsters Chris Yarran and Dennis Armfield were given specific roles as running defenders, and this all combined to squeeze Joseph out of the team when the 2011 season got underway.

Wearing the red and white strip of the Northern Bullants after an absence of two seasons, Joseph accepted the situation and knuckled down to the task of earning a recall – which came when he was named as Carlton’s substitute for the round 5 clash against Adelaide at Docklands. He stayed in the side for three matches, but was then omitted again until round 16, when his form with the Bullants again demanded a recall. From then on, Aaron remained in the side for the rest of a season that culminated in a soul-searing defeat by West Coast in a cracking Semi Final contest at Subiaco.

In the wake of that disappointment, the Navy Blues began 2012 with confidence and purpose, and after three rounds were undefeated ladder leaders. But a shock loss to Essendon in round 4 was compounded by the beginning of a horror spate of injuries among the team’s better players. The Blues never recovered from a mid-season slump and ended the year tenth on the ladder – costing senior coach Brett Ratten his job.

Joseph managed 13 senior appearances over the season, after a delayed start in round 5. His two best games came against Hawthorn in round 14 (when the Blues were beaten by 50 points, but Aaron put the clamps on their star Cyril Rioli and kept him goalless for the fourth time in succession) and the following week against Collingwood, when his 16 possessions and six intercept marks helped bring a consolation victory over Carlton’s most detested rival. Then in round 16 he was smashed into head-high by North Melbourne’s Jack Ziebell. Joseph was concussed, but refused to stay down and played out the match.

Under Ratten’s successor Mick Malthouse, Joseph played in three of Carlton’s first four matches of 2014, but then had to bide his time in the VFL with Northern Blues until late August, when he was recalled into the senior side as a late replacement when Andrew Walker withdrew from the round 22 blockbuster clash against Essendon. In front of 53,000 on that Saturday night at the MCG, Joseph completely blanketed his opponent Alwyn Davey, restricting him to just 4 disposals and one mark before the Bomber small forward was subbed off late in the third quarter. Carlton lost by a kick however, when Essendon goaled inside the final minute in what turned out to be Joseph’s last appearance as a Carlton senior player.

Sent back again to the VFL to see out his contract with the Northern Blues, Aaron was delisted at season’s end – bringing the curtain down on his AFL career after 73 games in five seasons.

Joseph lined up for SANFL club Glenelg for the 2014 season 'AJ' was still running around for the Tigers in 2017 after establishing himself as a leader at the club for the young players to follow.