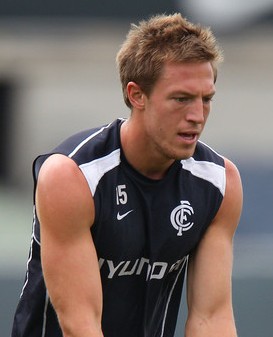 
Carlton’s recruitment of ex-Geelong defender Jeremy Laidler in 2010 was seen by some fans and commentators as a master stroke. Having played more than 50 VFL matches for the Cats (plus two senior games) 21 year-old Laidler was traded to Carlton prior to the 2010 National Draft, and soon made a claim for himself in an unsettled Blues’ defence.

Earlier, Laidler had begun his football journey with Essendon District club Doutta Stars, before he developed into a versatile marking forward for the Calder Cannons and represented Vic Metro in the 2007 AFL Under 18 Championships. A hard-working natural left-footer, he won the Cannons' Best and Fairest award that same year, before being recruited by Geelong at pick 32 in the 2008 AFL Rookie Draft. Over the next two seasons, Geelong groomed Laidler as a nominal replacement for their veteran half-back Darren Milburn. Therefore, Jeremy underwent a lengthy apprenticeship in the VFL, before playing his first senior game for the Cats against Brisbane in round 15, 2009. More than a year later, he was called up for a second time when Geelong met the Western Bulldogs in round 20, 2010, only to then be left out for the rest of the season.

Having watched Geelong claim the 2009 Premiership in his first year, then battle their way through to a Preliminary Final in 2010, Laidler was champing at the bit - impatient with his lack of opportunity - when 33 year-old Milburn told Geelong that he would play on again into 2011. By then, Carlton had already shown interest in Laidler, and when it became known that he was considering a change of clubs, the Blues leapt at the chance to get him to Princes Park.

Eventually, a deal was done that saw Jeremy and draft pick 41 (used by Carlton to recruit Luke Mitchell) traded to the Blues for selections 36 and 53. Laidler was welcomed to Princes Park with guernsey number 15, and the opportunity to cement a regular place in the back six. He put in an impressive pre-season, and was selected to make his senior debut for his new club in the first game of 2011 – against Richmond on a fine Thursday night at the MCG. In front of 60,000 fans, the Blues accounted for the Tigers by 20 points, and Laidler’s reborn career was up and running.

Physically strong and good in the air, Jeremy was consistently effective throughout the first nine rounds of the year - highlighted by his first career goal in Carlton’s draw against Essendon in round 4, and an outstanding game against his former club in round 9, when he collected 21 possessions and took 6 marks in the Blues’ narrow loss to the unbeaten Cats. However, a strained medial ligament in his left knee - suffered early in Carlton’s round 10 victory over Melbourne – was a portent of things to come, and brought a premature halt to his progress.

Still, he was back patrolling across half-back for the Blues in round 15 against Richmond, working hard in tandem with his fellow recruit Nick Duigan as the pair steadily won Carlton fans over with their old-style guts and determination. In September, Jeremy capped off his first season at Princes Park as one of Carlton’s best in an agonisingly-close Semi Final loss to West Coast. Very little more could have been asked of him in his first 19 matches, and he seemed set for a long career - at least until the 2012 pre-season matches got underway, and he was one of the early casualties.

Playing against the Western Bulldogs at Docklands in early March, Laidler found himself engaged in a test of strength under a high ball, against Bulldog ruckman Will Minson. As both men jostled for position, Jeremy’s suspect left leg twisted slightly - and those watching on television were horrified to see his kneecap pop sideways. He fell to the ground in pain, and the early prognosis was that he would be sidelined for six weeks. It was a pleasant surprise therefore, when Laidler was passed fit to take his place in the team for Carlton’s round 1 clash against Richmond at the MCG. With his knee tightly strapped, Jeremy seemed to run freely and provided his customary starch to the Blues’ defence as the team enjoyed a dream start to the season. Big wins over Richmond, Brisbane and Collingwood made every other side sit up and take notice – until round 4, when Essendon demolished Carlton in a boilover at the MCG on a Saturday afternoon.

In the first minute of that game, Laidler went down clutching his suspect knee again, and every Bluebagger’s heart skipped a beat. Although Carlton’s medical staff and his own obstinacy got him back on the field, Jeremy was hampered for the rest of the match. Later, it came as no surprise when the club announced that he would undergo surgery, and miss between six and eight matches. Those estimates were not far wrong – in fact, Laidler spent seven weeks in post-op rehabilitation, before being passed fit for another return with the Northern Bullants against Geelong at Princes Park in late June. His comeback was eagerly awaited by two teams, given that Carlton’s VFL side had not won a game all year, while the seniors had been beaten in five of their eight matches during his absence. 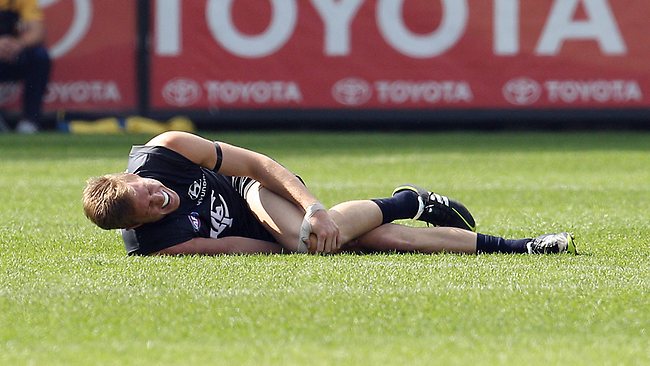 However, during the second quarter on that sunny afternoon, Carlton supporters in the crowd must have thought they were watching a horror movie when Jeremy’s knee buckled under him for a third time. Scans afterward revealed that the damage was equally as severe as before, so there was no alternative apart from more surgery. Throughout the rest of the year, while Carlton’s fortunes crashed in ruins, and coach Brett Ratten was sacked with a year remaining on his contract, Laidler dedicated himself to getting his knee right once and for all. His whole-hearted approach to his rehab program paid off too, when he turned up at Princes Park for the first session of pre-season training in November already in excellent shape.

Carlton’s new senior coach Mick Malthouse was renowned for his emphasis on defence, and indeed, was similar to Laidler in his approach to the game during his playing days. To an outsider the pair should have had much in common, but that, apparently, was not the case. Jeremy made his return to senior football at last when he was selected for round 2, 2013 – the day when Malthouse coached the Blues for the first time against his former club, Collingwood, on a Sunday afternoon at the MCG. In front of a massed crowd of 84,000, Carlton were in the contest for three quarters, before wilting late to be beaten by 17 points. Laidler had a dirty day in a back pocket, and managed only four possessions before he was substituted out of the game at three-quarter time. He was then omitted the following week, and didn’t earn a recall before Carlton’s season ended in a Semi Final defeat by the Sydney Swans.

A few days afterward, the 24 year-old was told that his services were no longer required at Carlton – a blow that he later described as “a real kick in the guts.” Given his medical history, Laidler’s prospects of finding a place at another AFL club seemed slim, but Sydney threw out a lifeline, and Jeremy grabbed it with both hands. Benefitting from a full pre-season preparation, he went on to play 19 matches in 2014, and although he wasn’t called on during the Swans’ finals campaign, his consistency was rewarded with a two-year contract extension. Laidler would find his third club the Swans to be his most fruitful becoming a regular at the club that included getting a 50 game milestone and playing in the losing 2016 Grand Final for the Swans.

Laidler would retire at the end of the 2017 season with the Swans, he would be appointed as a development coach after working with the Swans Academy in 2017. Laidler would manage 87 games and kick 8 goals with three clubs in a career that spanned from 2008 to 2017.