Key defender through our dark days... 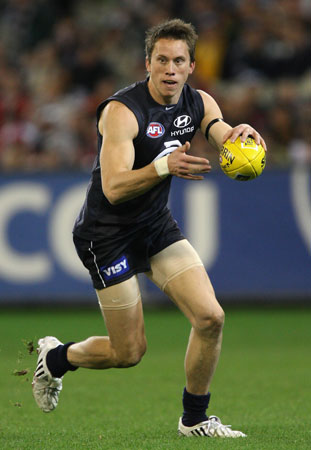 
An honest, determined, yet often maligned defender, Bret Thornton began his AFL career as a fresh-faced 18 year-old in 2002 at the lowest point in the history of the Carlton Football Club. Thrust into key position defensive roles far too young – because there was no-one else to call on - Thornton shouldered enormous responsibility and high expectations throughout his decade in navy blue.

Back in 2001, Thornton was recruited by Carlton from the Oakleigh Chargers as Rookie Draft selection number 32. A local product, his junior club was the Mount Waverley Blues. A year later, after a handful of Reserves games where his aerial ability (thanks to his long arms) stood out, Bret was elevated to Carlton’s senior list and made his debut against the Fremantle Dockers at Subiaco Oval in round 10.

It should have been a joyous occasion for the slender youngster in guernsey 32, but the Blues were anchored on the bottom of the ladder and on the way to the club’s first-ever wooden spoon. Thornton’s inclusion was one of seven changes to a team that had been thrashed at home by Adelaide in round 9, and he was solid, if unspectacular, in a 28-point loss to the Dockers. Throughout the rest of that bleak season, coach Wayne Brittain churned through his list week by week in an increasingly desperate search for a miracle. Thornton provided some light in the gloom when he was voted Best First Year Player, but overall, more pain was on the way.

Late in 2002, the Blues were subjected to an AFL investigation that found the club guilty of breaching League salary cap rules. Hit with heavy fines that pushed the club to the brink of insolvency, and draft restrictions that denied the team access to the country’s best young talent for two years, Carlton slid further into the mire. By the end of his second year, Thornton was a fixture in Carlton’s defence and was already being asked to pick up the opposition’s key forwards. He was tall enough and quick enough to pick up the likes of Fremantle’s Matthew Pavlich and Essendon’s Scott Lucas, but their bulk and strength provided some harsh lessons for the youngster. Coincidentally, he was sent forward himself in desperation against Fremantle in round 10, 2003, and one his marks was followed by a neat kick that sailed straight through the middle to bring up his first career goal - almost exactly 12 months to the day after his debut.

Throughout 2003 and ’04, under a new coach in Denis Pagan, Thornton stuck to his thankless task. Rarely missing a match, he chalked up his 50th game in round 19, 2004 against Essendon, and underlined his value to the side by finishing fifth in the Best and Fairest. During that time, his nickname evolved from ‘Thorny’ to ‘Thornbird’ and eventually to ‘T-Bird,’ which endured for the rest of his career.

Some much-needed joy came to the Carlton faithful in 2005, when the rag-tag Blues won the pre-season Wizard Cup. But it was a victory that came at a cost, because Thornton damaged a knee and missed the first four games of the season. Throughout another tough year, T-Bird found himself at full back whenever Luke Livingston was collared by the better full-forwards in the competition, and unfortunately, that was often. Although his occasional angry outbursts at team-mates on the field brought criticism, it could also be argued that those reactions were a reflection of Thornton’s discipline and passion for the contest, rather than selfishness. Unfortunately for Bret, those sorts of episodes would continue to colour the perceptions of many supporters over the next few years.

In 2006, Lance Whitnall added nous and experience to Carlton’s back half, and he and Bret struck up a flexible working relationship in the key defensive posts. Again, Thornton played all 22 games, lifting his average possessions from 11.8 per game to 16.4, and noticeably becoming more competitive in one-on-one duels. The struggling Blues still finished last for the third time in five seasons however, and during trade week, Hawthorn made a strong bid to lure him to Glenferrie Oval. For a month, T-Bird seemed certain to be on his way to a new club. Carlton stood firm, however, and on the last day of trading, Thornton relented and agreed to stay. The Blues were also fearful of losing Jordan Russell in the same way, but the trading period ended with the club’s preferred list intact, and Thornton was rewarded with a new 3-year contract.

Another pre-season Premiership came Carlton’s way in 2007, with a defence at last featuring some competitive height and strength. Irish import Setanta O’hAilpin and versatile tall Jarrad Waite were preferred in the key posts, with Thornton in his ideal (and most effective) position as third tall. This allowed captain Lance Whitnall to return to attack, where he in turn benefitted from the emerging talent of Brendan Fevola. T-Bird was elevated to the team’s leadership group that year, and celebrated his 100th game in round 10, against the Western Bulldogs at the MCG – earning the dubious distinction of becoming one of the few Blues to have reached the century without appearing in a final. 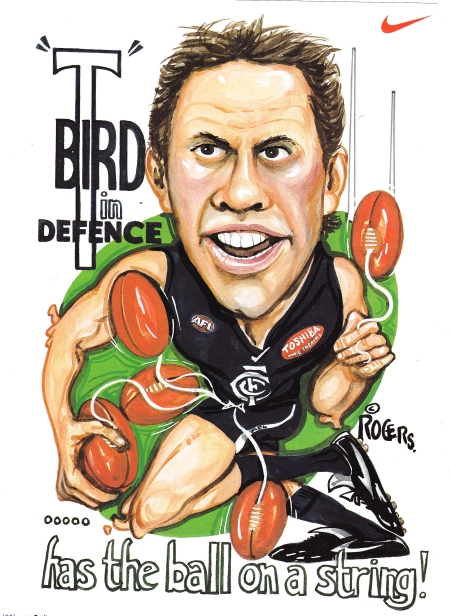 Season 2008 marked the sensational debut of Chris Judd as captain of Carlton, and a huge first step in the rebirth of the Blues. Highlights for Thornton that year included his second career goal in Carlton’s 30-point win over Collingwood in round 12 at the MCG (scored exactly 100 games after his first) and another top 10 placing in Carlton’s Best and Fairest. Under their new skipper - and second-year coach Brett Ratten - the young Bluebaggers climbed from the depths to eleventh, and for Thornton the next two years provided a mixture of joy and disappointment.

The joy came after T-Bird racked up another 20 games to help the Blues qualify for their first finals campaign for eight seasons in 2009, followed by the sour taste of defeat by Brisbane in a hard-fought Elimination Final at the Gabba. Lion forward Daniel Bradshaw had much the better of Thornton that night, and his five goals inspired his side to a comeback win from 24 points down at the last change.

Six months later, the 2010 AFL season began with Carlton meeting Richmond on a warm Thursday night at the MCG, and T-Bird led the Blues out through a banner acknowledging his 150th game. One of the ten youngest Blues ever to have achieved this feat, he shared the exuberance of an emphatic victory by 56 points with Andrew Carrazzo, who brought up his 100th senior match on the same night.

Disappointment was just around the corner however, when Thornton and Jarrad Waite were both dropped from the team as penance for Carlton’s capitulation to Essendon in round 3. For T-Bird, it was the first time he had played at VFL level since 2002. He remained there for three weeks, before being recalled for the Blues’ 61-point demolition of St Kilda in round 7. He played the next nine games straight, but after the Round 15 loss to the Western Bulldogs was omitted again. Although his ability and experience stood out at VFL level, he was not recalled to the senior side before the Blues lost their second consecutive Elimination Final to the Sydney Swans at Homebush Olympic Stadium.

Barely weeks later, rumours claiming that Thornton had fallen out of favour with Carlton’s match committee and was seeking a trade to another club were confirmed. As before, Hawthorn was his preferred destination, but this time the Hawks were only lukewarm on the idea and again, a satisfactory deal couldn’t be reached. So with a year still left on his existing contract, T-Bird stayed on at Princes Park, and to his credit, knuckled down to preparing for his tenth AFL season.

During the 2011 NAB Cup, Thornton was given opportunities in the forward line, and reminded the club’s coaching panel that on his day he could provide a more than handy lead-up target. But it was the arrival at Carlton of two seasoned defenders in Nick Duigan and Jeremy Laidler – as well as the welcome maturity of full-back Michael Jamison - that had the biggest effect on Thornton’s immediate future.

Relieved of the responsibility of a key position, and refreshed by regular forays into attack, T-Bird seemed more assured and confident than at any other time in his career in 2011. In Carlton’s second game of the year at the Gabba in Brisbane, he chalked up a career-best four goals, as the Blues welcomed the Gold Coast Suns to the AFL with a 119-point drubbing. And from then on, he provided a viable forward option all year. Later, he stood up in both of Carlton’s finals matches – especially early in the fray when the battle was at its most intense – and probably because of that, was signed to a new 12-month contract in October, 2011.

However, Bret would manage only seven senior games in 2012, often playing forward for a return of 9 goals. It was a shattering season for the Blues; one that started with three straight wins but ended in disarray and the sacking of coach Brett Ratten. Among the many departures at season's end, Carlton announced that Thornton had decided to exercise his 'unrestricted free agent' status after 10 years with the club, and would be seeking a new home in the Pre Season Draft.

In December, 2012, T-Bird was picked up by Greater Western Sydney (GWS) their first selection, adding much-needed experience to their young squad. He left Carlton as the Blues’ longest-serving player in guernsey number 32, with a record total of 188 games, and whole lot of appreciation for his grit and determination through some of Carlton’s darkest days. Thornton would only manage one further game with GWS before being delisted at the end of the 2013 season.

Thornton signed on to play with WRFL first division club Deer Park for the 2014 season in which he played in a premiership with former teammate Ryan Houlihan.

Thornton would then become a playing coach in the Alberton Football League with Dalyston for the 2015 and 2016 seasons, he was joined there by former Blues team mate Brad Fisher.