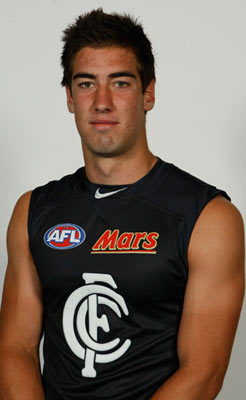 At almost 200 cm and on the way to 100 kg or more, Carlton drafted 18 year-old Calder Cannon Luke Mitchell with hopes that he would loom large in the Blues forward line for many years to come. An imposing key forward selected with pick 42 in the 2010 National Draft Mitchell – nicknamed ‘Squid’ - had modelled his game on Brisbane Lions great Jonathan Brown. However, chronic problems with his shoulders prevented him from pushing for senior selection throughout most of his first two seasons at Princes Park.

Having spent his formative years at St Bernard’s College in Essendon, Luke joined the Calder Cannons just prior to his 17th birthday, and kicked three goals in an emphatic TAC Cup Under-18 Grand Final victory in his first year. Then early in 2010, he dislocated his left shoulder during a practice match. Surgery and rehab sidelined him for months, and in the process robbed him of the opportunity to impress at the AFL Under-18 Championships.

When he did eventually return - on the eve of the finals, Mitchell’s smart leads and strength in the air sharpened Calder’s attack, and he finished the year on a high by kicking 5.4 from 22 possessions in the Cannons’ second successive Grand Final triumph. After that, Carlton was even more intent on drafting when the opportunity arose.

On arrival at Princes Park, Luke was allocated guernsey number 25; formerly worn with distinction by two of the Blues’ best-ever forwards in Alex Jesaulenko and Brendan Fevola. But he had barely settled in and started pre-season training when luck deserted him once more, and he damaged his ‘good’ right shoulder. By March 2011, he was on his way back and feeling good – only for his left shoulder to pop out again at training. More surgery followed, and he was placed on the long-term injury list.

With an extraordinary run of ill fortune seemingly behind him at last, Mitchell was on his way to completing a full pre-season program in 2012, before another heavy knock on his right shoulder had him off the track and into the medical rooms to the dismay of everyone at the club. Mercifully, the damage this time wasn’t as severe, and Luke was back in harness for the Northern Blues before mid-season. It took a few weeks for him to regain his touch, but when reigning VFL Premiers Port Melbourne came visiting in late July, the Squid caused them more than a few headaches.

Although his team was well-beaten, Luke never stopped presenting and demanding the football. He kicked four of his side’s eight goals, and showed many of the qualities that attracted Carlton’s attention in the first place. And barely a month later, all his hard work on the track and diligence during rehab paid off, when he was selected for his first senior game in Carlton’s last match of the season against St Kilda at Docklands.

Twelve or so minutes into the first quarter of that contest, Carlton skipper Chris Judd burst from the centre and kicked long to Mitchell on the lead. Squid spilt the mark, but showed great agility by turning inside his man, recovering the football, and snapping around his body towards the open goal. The Sherrin bounced three times on its way through for the Blues’ fourth major of the game, and Mitchell joined the exclusive fraternity of League footballers who have brought up full points with the first kick of their careers.

Unfortunately for the big unit, that one brief experience of elite-level football was to be his first and his last. Throughout 2013 his form tailed off, to the extent that late in the year he struggled to even hold a regular place in the Northern Blues’ senior side. Patience is not a virtue with AFL teams in the 21st century, so at season’s end, Luke was told that his services were no longer required.