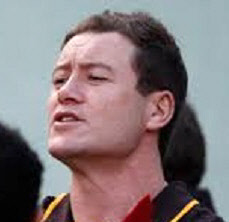 Although he was frequently injured throughout his playing career at Fitzroy, Brisbane and Hawthorn, John Barker was still good enough to play 168 games of AFL football. Already earmarked as a future coach before his retirement in 2006, he was immediately appointed as an assistant by St Kilda. After two seasons with Saints, he returned to Hawthorn in a similar role in 2009, before crossing to Carlton in 2011.

At first, Barker was a versatile key position player who rose through the ranks at Pascoe Vale, the Northern Knights and Vic Metro to be drafted by Fitzroy in the 1992 National Draft. The first in a string of shoulder and leg injuries delayed his senior debut until 1994, but over the following three seasons he notched up 47 games and 12 goals for the struggling Lions, who won just eight of those matches and were on the verge of folding.

In 1997 Fitzroy was forcibly merged with Brisbane to create the Brisbane Lions, and Barker was one of only seven Royboys who were retained on the new club’s list. However, John’s first and only season up north was not a happy one. Injuries restricted him to just eight games, and at the end of the year he and Nathan Chapman were traded to Hawthorn for Brad Scott.

At Hawthorn, Barker found the going tough at first, and it wasn’t until 2000 that he grabbed a rare opportunity and kicked four vital goals to help win a thriller against Brisbane. Over the next three seasons he became part of the backbone of the team, playing finals football in 2000 and 2001, while finishing third in the Best and Fairest and winning the Hawks’ leading goal-kicker award with 47 majors in 2001.

Injury again blighted Barker’s career after 2002, restricting him to an average of eight games per season. Yet he remained a popular and respected figure around the club, to the extent that when he announced his retirement prior to round 20, 2006, a number of his team-mates offered to step down so that he could be honoured with a farewell game. In the end that wasn’t necessary – he was included in the team on merit – and although the Hawks were well-beaten by Geelong, he was chaired from the field to generous applause.

Meanwhile, a former Fitzroy team-mate in Ross Lyon was coaching St Kilda, and despite overtures from Hawthorn coach Alistair Clarkson, Barker accepted a two-year offer from the Saints to coach their forwards. Two seasons later, after completing his contract at Moorabbin, Barker returned to Hawthorn, where he was influential in the development of several players including Lance Franklin, Jarryd Roughead and Cyril Rioli.

In 2011, Barker was recruited by Carlton to fill a similar role, and over the following four seasons (as the Blues alternated between the top eight and the bottom eight on the ladder) he worked diligently under senior coaches Brett Ratten and Mick Malthouse. Then came the cataclysmic events of May 2015, when Malthouse was sacked and Barker was appointed in his place as caretaker coach of the Blues for the rest of the season.

While the process of finding and recruiting a new senior coach unfolded, Barker became one of the prime candidates when he lifted his injury-ravaged team to a number of improved performances. Late in the season, Carlton’s list was at times reduced to less than thirty fit players, and eventually the club finished last – but the difference in attitude of the players under Barker was plain to see.

In late August 2015, another Hawthorn assistant took over the reins at Carlton when Brendon Bolton was announced as the Blues’ new senior coach for 2016. Although Barker was deeply disappointed by the decision, he told the club that he wanted to finish the task he was asked to do, and mentored his charges through the last two games of the year. Although Carlton finished last, and won only three times under Barker’s stewardship, his efforts were widely appreciated by everyone at Princes Park.

Carlton president Mark LoGiudice summed up the situation when he said that Barker deserved the club’s “deepest gratitude for restoring a competitive spirit in the team.” CEO Steven Trigg agreed, adding that Barker “had done a mighty job, and football clubs need to care for people like that”. As for the broader Carlton community, there was an almost unanimous sigh of relief when the club announced that Barker would be staying on at Princes Park in 2016, in the role of stoppages coach.