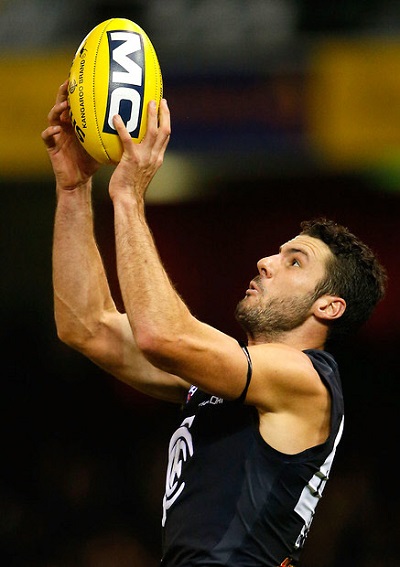 
West Australian Simon White was recruited by the Blues as a mature-age rookie in the 2010 AFL Rookie Draft. Originally from the Carine Junior Football Club, White made his WAFL debut for Subiaco in 2009, and had a stellar year – earning the Lions’ Rising Star award before playing in their Grand Final loss to South Fremantle.

A versatile, strong-marking defender capable of pinch-hitting roles up forward, Simon was compared to former West Coast Eagle Adam Hunter during pre-draft discussions. When he was still available at number 56, Carlton snapped him up with their fourth round selection, and allocated him guernsey number 43. Only five other players in Carlton’s history have worn this number at senior level, and two of them were all-time greats in David McKay and Anthony Koutoufides.

After an impressive pre-season, White played just once at VFL level for the Northern Bullants before being called into Carlton’s senior team for the trip to Adelaide to take on the Crows in round 4, 2010. Handed the big task of controlling Adelaide captain Brett Burton, Simon did all that could have been asked of him. His 18 possessions and 11 marks, while keeping ‘The Birdman’ to the solitary goal, was influential in a big win by the Blues.

Over the following five weeks, White averaged 15 disposals and almost 8 marks per game as Carton strengthened their hold on a top eight ladder position. He kicked his first career goal with a textbook drop-punt from deep on a flank against Collingwood in round 6, before Hawthorn toppled the Blues by 50 points in round 9, and Simon suffered a knee ligament strain that kept him out of senior football for the rest of the year. Still, the club liked what they saw throughout White’s debut year, and promoted him to the senior list at the 2010 National Draft.

Unfortunately, Simon’s second season mirrored his first, and he just couldn’t shake the curse of injury. He played five of Carlton’s first six matches in 2011, before tearing a hamstring, and that injury kept him out of the senior side for ten weeks. Eventually recalled for round 15, he promptly damaged the same medial ligament that had troubled him previously, and didn’t play again that year. During the off-season, Simon underwent remedial surgery on his knee. As part of that procedure, an artificial LARS (Ligament Augmentation & Reconstruction System) ligament was implanted to help strengthen the joint, but his body tissues did not accept the synthetic fibres, and the repaired ligament ruptured again while White was beginning another comeback with the Northern Blues in round two of 2012.

More surgery and a long rehabilitation program later, he was welcomed back into the Blues’ senior line-up at last for round 19, when Carlton hosted Sydney on a Sunday afternoon at Docklands. Deep in defence for most of the game, Simon collected 15 disposals and nine marks in a solid return, although Carlton’s finals hopes took another heavy hit with a 22-point defeat. White retained his place in the side through to the end of a tumultuous season for the club, and his dedication was rewarded when his contract was renewed for another 12 months. Unfortunately, the same did not happen for senior coach Brett Ratten, who was sacked by the club’s board and replaced by former West Coast and Collingwood Premiership coach Mick Malthouse.

White was overdue for a smile from Lady Luck in 2013, and seemed like he was getting it when he played in nine of Carlton’s first 13 games, before a relatively innocuous incident during a VFL match in late July wrecked another season. Playing for the Northern Blues against Box Hill, Simon tried to duck under an opponent’s tackle, but slipped and copped an old-fashioned “coat-hanger.” Although he was stunned at the time and sat out the remaining minutes of the game, he seemed to make a quick recovery and completed a full training session three days later. Less than 24 hours after that however, a precautionary scan revealed that he had fractured vertebrae at the base of his neck. Eight weeks in a full neck-brace and another four in a collar support wasn’t the best way to see out the season, but with those precautions Simon was at least able to commence his preparation for 2014 on time, and in good shape.

White went on to enjoy his most productive season to date, playing 19 games in a variety of defensive roles that also gave him the freedom to influence the scoreboard when the opportunity arose. On a Sunday afternoon at Docklands in round 16, Simon had a day out against St Kilda, when he started the game in attack, and kicked four majors as the Blues ended a four-game losing streak and slaughtered the Saints by 85 points. Despite that big win however, Carlton still finished 2014 in a miserable 13th spot on the ladder. White’s growing maturity was one of the few positives to emerge from a wretched season, and his contract extension for another two years was well deserved. 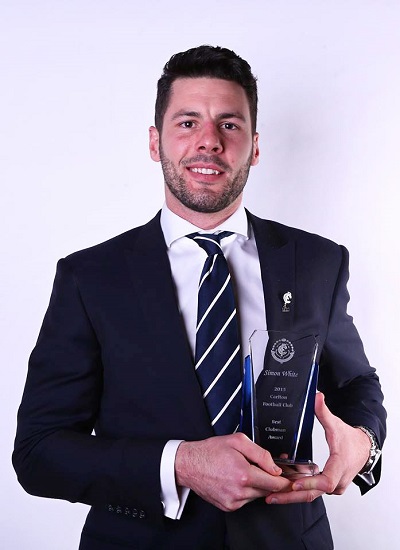 The buzz around Princes Park in the lead-up to season 2015 seemed a good omen for the club, but soon proved to be totally misplaced. The Blues lost their first three games by big margins, and from that point on, the season descended into near-chaos. In late May, as defeat followed defeat, Malthouse was sacked and replaced by his assistant John Barker.

A big factor in Carlton’s demise was that the club was being decimated by injury, and White was among the casualties. During the Blues’ heavy loss to West Coast in round two at Subiaco, Simon had strained the medial ligament in his left knee once more. He played twelve of the next seventeen games, but was rarely at his best before he suffered another knock to the suspect joint in early August. So a fortnight later, the club decided that Simon’s season was over. He would undergo surgery yet again, with the aim of having him ready to begin pre-season training for 2016. Simon accepted that latest set-back with his usual positive attitude, one of the reasons why he was such a popular winner of Carlton’s Best Clubman Award at season’s end.

Former Hawthorn assistant coach Brendon Bolton was appointed to the senior role at Carlton in 2016, and it didn’t take him long to recognise White’s attributes. Given a variety of roles in defence – often in a key position – Simon rarely lowered his colours as he completed another consistent 17-game season.

After playing 11 games in the 2017 White was delisted at the end of the season by the Blues.

2018 - White would join Doncaster East in the second tier of the Eastern League with his former team mate Brock McLean, they would both play in back to back premierships in 2019 & 2019.