In a cracking contest, Carlton lost to Hawthorn by 15 points at Docklands.

In this, the second of four consecutive Friday night blockbusters against top-four contenders, Carlton fell to Hawthorn by 15 points. During a cracking contest at Docklands Stadium, the Blues were ahead at half-time, and just two points adrift at the last change, despite the fact that captain Marc Murphy had been knocked senseless in a heavy collision with Hawthorn skipper Luke Hodge during the second quarter.

Early in the final term, a resolute Carlton regained the lead, but couldn’t withstand the Hawks’ aerial prowess during the final 15 minutes. And in a heavy blow to Carlton’s finals hopes, ‘Murph’ was carted off to hospital, where an early diagnosis had him ruled out of action for 3 to 4 weeks with a broken cheekbone.

Still seething from their defeat by Essendon on the previous Friday night at the MCG, the Blues faced an even bigger task against the in-form Hawks, who were sitting comfortably in second place on the ladder and looking to improve on their unbeaten run of nine games. They had accounted for Carlton in every one of their meetings since round 6, 2005, and were intent on doing it again - but the Blues weren’t short of motivation either. Criticism of their fade-out against Essendon had been heavy, and the occasion of Chris Judd’s 250th AFL game gave the team real impetus. 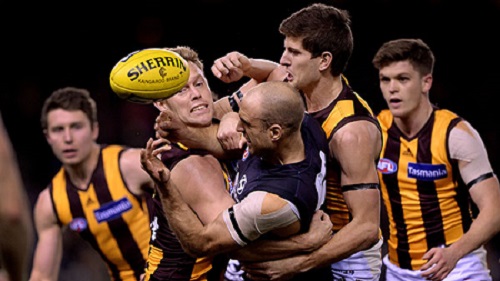 At the selection table, Chris Yarran and Simon White were called to account for less than satisfactory efforts against the Bombers, making way for Andrew Carrazzo and Josh Bootsma. However, Carrazzo’s problem calf then let him down again, so Sam Rowe was called into the team as a late replacement. Kane Lucas was asked to wear the bright yellow substitute’s vest once more, as a bumper crowd of more than 45,000 crowded into the stadium under a closed roof on a cool Melbourne evening.

There were few surprises as the teams sorted themselves out prior to the opening bounce. Judd and Rowe joined Jarrad Waite and Levi Casboult as the forward targets for the Blues, while Hawthorn went with their regular combination up front of Franklin, Roughead, Gunston and Hale. At the first ruck contest, an immediate free-kick to the Hawks landed the ball with Roughead, and he snapped the first goal of the game after only 40 seconds of play. Franklin added number two, and Gunston a third before the Blues found their feet and began winning their share of possession.

Ten minutes in, Casboult took a big contested mark 30 metres out on a sharp angle. His kick for goal missed, but he atoned shortly afterwards with another strong grab alongside the right point post, and brought up Carlton’s first major with a clever round-the-corner set-shot. Hale replied for Hawthorn, before good link-up play from half-back by the Blues landed the ball with Mitch Robinson, whose wonky kick off the boot curled through for Carlton’s second.

Robinson, Kade Simpson and Marc Murphy became ever more influential as the term progressed, and Carlton’s foot-skills stood out in a brilliant passage of play that ended with a mark and emphatic goal to Waite from a tight angle at the 26-minute mark. Almost on the siren, Jeff Garlett fired out a handpass to Zach Tuohy, and the Irishman bombed Carlton’s fourth goal from 48 metres to cut the margin in favour of Hawthorn to just two points at quarter time.

The early stages of the second quarter belonged to the Blues, and Brock McLean could have put his side in front with a goal after four minutes – but his kick from within the 50 metre arc missed right. Carlton would not be denied however, and a free kick to Eddie Betts and a neat pass to Bryce Gibbs posted a fifth major and put the Blues in front by five points.

It was then, just as the intensity and tempo of the game lifted another notch, that Murphy and Hodge collided in the middle of the ground, and Carlton’s captain came off second best. Slow motion replays showed both players charging at a loose ball, and meeting hard. Hodge’s shoulder collected Murphy’s head, and the Blues skipper was left in Disneyland. In another incident shortly afterwards, Hodge also crashed into Lachie Henderson with a high forearm to the head, earning a sanction (but not a suspension) from the Match Review Panel.

So as Murphy was readied for a trip to hospital, Lucas was substituted into the game and the tenacity from both sides continued unabated. Gibbs, Simpson, McLean, Judd and Matthew Kreuzer were outstanding for the Blues at this stage, while Robinson was tackling every Hawk that came in reach, and the crowd was revelling in a tough, skilful contest.

Franklin marked on the lead at the 12-minute mark of the quarter, and his trademark right to left trajectory on the kick sent it through the middle to tie the score. Betts immediately replied for the Blues, then Lucas bounced out of defence and kicked long to Kreuzer. A 50-metre penalty was awarded, and Carlton’s big number 8 trotted to the goal-square before ramming the ball through to put Carlton up by 11 points.

Hawthorn kept coming of course, and Gunston outmarked Henderson in the goal-square to kick his second major after 20 minutes of intensity from both teams. Then Casboult passed to Judd on the boundary line - wide out on the left half-forward flank – and the Blues’ former skipper steered through a pearler to restore Carlton’s advantage. In the last few minutes of the quarter, both sides created half-chances, but on the siren at half-time Carlton still led by two straight kicks.

In the first seconds of the third term, Carlton streamed straight back into attack, and Betts’ handball to Waite brought up full-points to give the Blues real momentum. Hawthorn then rallied, and clawed their way back into contention through Roughead, whose three goals for the quarter were decisive. Although Simpson, Judd, McLean, Kreuzer and the lively Jaryd Cachia were getting plenty of the football for Carlton, Hawthorn’s big men began to win a greater share of the aerial contests, and their confidence grew. Still, the Blues were not yet spent, and trailed by just 2 points at three-quarter time.

Carlton came out with purpose once more as the final stanza began, and got away to an ideal start when McLean sent a perfect pass into the path of Dennis Armfield. The blonde speedster ran on into an open goal, putting the Blues back in front. The intensity of the contest reached new heights as Tuohy and Rowe both missed, before Hodge snatched back the lead for the Hawks with a goal after five furious minutes. Franklin marked and goaled for Hawthorn at the 10-minute mark, and added another shortly afterwards. The old football truism that tall men don’t get any shorter as the game progresses then came into play, and as the Blues defence began to tire at last, Hawthorn sized the initiative.

Although each side had chances inside the last ten minutes, Hawthorn clung to a ten-point lead deep into time-on, before (Eddie Betts)) ran onto the ball in space in the right forward pocket. His snap-shot just missed, and from the kick-out Hawthorn swept the ball forward to Josh Hill, who kicked the sealer with less than a minute on the clock.

In the end, Carlton was beaten on merit by a more complete opponent. But unlike the previous week against Essendon, the endeavour and determination of this Blues combination could not be faulted. Still, Carlton’s Achilles heel was exposed yet again – an inability to consistently cope with power forwards for a whole game.

With a bye next up, then Sydney at home under lights to come, the task of matching the Swans' imposing forward battery of Goodes, White, Pyke – and probably, Tippett – seemed certain to provide Blues coach Mick Malthouse with many a headache.

250 Games (AFL): Chris Judd
Interesting Fact: This would be the last time we were in the 8 (if you exclude a 'promotion' given the Essendon saga - until 2020