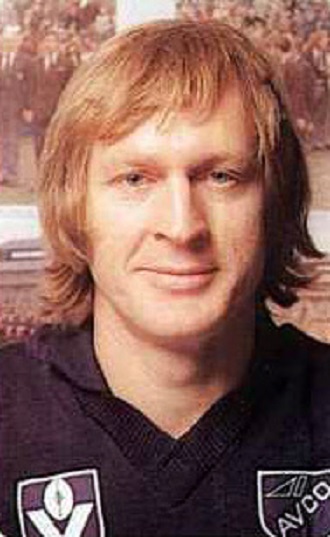 One of the most spectacular high marks of his era, David Robert James “Swan” McKay was a Carlton star for twelve seasons, and a key member of four Premiership teams.

Recruited from Newlyn, near Ballarat in central Victoria, McKay arrived at Princes Park in 1968 as a raw-boned 19 year-old. Coach Ron Barassi liked what he saw, and quickly realised that the laconic, easy-going country kid had the makings of something special after only a handful of games in the Blues’ number 43 guernsey. At 191cm and 95 kg he was robust enough to play in the ruck, while his exceptional aerial skills allowed him to hold down a key position. The problem was that he had joined the reigning premiers, so he wasn’t able to claim a regular place in the side until after the Blues were beaten by Richmond in the ’69 Grand Final. Early in the following season, McKay was given a chance at centre half-back, and took to it “like a swan to water.”

Quick for his size and blessed with wonderful judgement, “Swan” soon became a crowd favourite. From that season on and throughout his career, it was only on rare occasions when the weekly televised football highlights package did not include footage of him drifting across the front of the pack to pluck the ball from the hands of an opponent, or leaping high over three or four sets of shoulders to take another soaring high mark.

By 1970, McKay was embedded in the Carlton defence and hadn’t missed a game all season. After the Blues wound up second on the ladder, David experienced the thrill of a VFL final for the first time in his 29th senior match, when almost 113,000 fans packed into the MCG to see Collingwood beat Carlton by 10 points in a high-scoring Semi Final. Swan took 10 marks amid his 16 possessions that afternoon, and although his side was beaten, he revelled in the occasion.

A fortnight later, after destroying St Kilda in a one-sided Preliminary Final, Carlton met Collingwood again in the Grand Final in front of an even bigger crowd. McKay was in trouble early against his taller, equally athletic opponent Len Thompson, but rallied after half time to get right on top as the Blues came from 44 points down to shatter Collingwood in the greatest of all Grand Final comebacks. Swan took nine telling marks and collected 18 possessions to be hailed as Best on Ground, before collecting the first of his four Premiership medals.

One of the hallmarks of the Carlton teams coached by Barassi was their versatility, so as his career progressed, McKay started spending time up forward or in the ruck. From then on, when a game was in the balance and a goal or two was sorely needed, he was the man the Blues often looked for. He worked hard on his shooting for goal and became a reliable forward option.

The 1972 final series must rank as one of Carlton’s finest hours, as the Blues fought their way through three hard, cut-throat games to meet the raging favourites Richmond in the Grand Final. In that remarkable encounter on a fine, cool day at the MCG, Swan lined up in a back pocket to cover the Tigers’ resting ruckmen and for once, lowered his colours to Richmond’s Neil Balme, who kicked 5 goals – but the Blues still won by 27 points and McKay picked up his second medal.

In August 1973, Swan brought up game number 100 against Footscray at the Western Oval. Carlton won by nine points – thanks to McKay’s 13 marks in great game at centre half-back. A month later, the Blues and the Tigers met again on Grand Final day, and – still smarting from their surprise defeat the previous year – Richmond went head-hunting in a spiteful match. Swan was shifted forward early and kicked two majors, but neither he nor his team could match Richmond’s ferocity and the Tigers won the flag by 30 points.

Midway through the following season, in round 14, 1975 - McKay was embroiled in another infamous encounter at Essendon’s Windy Hill – a game that saw eight players (himself included) reported. On a wet and miserable day dominated by a howling wind, Swan’s 22 disposals, 14 marks and eight goals won the game for Carlton, and making that victory even sweeter, he later escaped suspension for striking.

By the time Carlton was knocked out of the finals in 1976 by straight-sets defeats at the hands of Hawthorn and North Melbourne, McKay was 27 and had racked up 172 games. But he felt he needed relief from the pressure-cooker life of a VFL footballer, so he agreed in principle to join WAFL club Subiaco. When he requested a clearance from Carlton however, the Blues steadfastly refused. Both sides dug in their heels, and some unfortunate headlines resulted before Swan relented and resumed training some weeks into 1977. In round 13 of that season, on a freezing cold and wet Saturday afternoon at the Junction Oval, bottom side Fitzroy caused a huge upset by beating Carlton by 7 points. In his 181st game, McKay took 9 marks, and his second goal of the game was the 200th of his career.

McKay’s fourth Grand Final came in 1979 against Collingwood. By then one of only five survivors from the ’73 team, Swan was approaching his 30th birthday. yet still playing valuable, consistent football. In a close, absorbing match on a wet and slippery MCG that day, Carlton again won a nail-biter by just 5 points, thanks to Wayne Harmes’ famous swipe at the ball from a forward pocket in the last minutes of the game. The ball ended at the feet of Ken Sheldon, whose goal clinched Carlton’s twelfth Premiership, and McKay’s third.

Throughout the majority of his career, Swan was a durable type who rarely suffered serious injury. That all changed in 1980 however, when he rolled an ankle, played on, and compounded the injury which hampered him for the rest of his career. Carlton made the finals again, but dropped out after successive losses. That was a bitter blow for the Blues, who promptly sacked coach Peter Jones and reinstated David Parkin.

Because of his ankle, Swan missed a number of games early in 1981, but was back to near his best for the finals. Carlton destroyed Geelong by 40 points in the second Semi Final and marched into the Grand Final as hot favourites against Collingwood. In a typically fierce and physical decider, Collingwood led by 21 points late in the third quarter, before the confident Blues overwhelmed them in the last term - winning Premiership number four for Swan McKay, and flag number thirteen for Carlton. One of the goals in that vital last quarter came from the big number 43. It was his second major of the game, and his last kick in league football. Amid the jubilation of victory in the rooms after the game, Swan announced his retirement after 263 games and 277 career goals. He was a few weeks short of his thirty-second birthday and it was an appropriate way to end the playing career of one of the club’s favourite sons.

Following his retirement, McKay stayed involved at Princes Park in a number of off-field roles. He was inducted into the Carlton Hall of Fame in 1996, and later became a high-profile critic of Carlton’s President John Elliott. When Elliott was voted out of office in 2002, McKay was appointed a director of the club under new President Ian Collins. During 1999 and 2000, David's son James McKay played eight Reserves games and kicked two goals for Carlton. 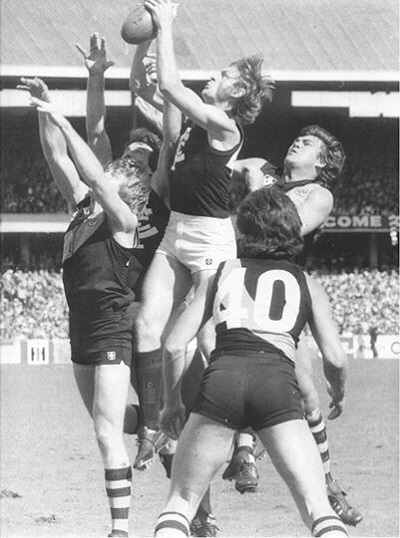