At last - with Kreuzer and Casboult shock inclusions, Carlton beat Geelong by 19 points at Docklands.

In one of the most significant home and away victories in the club’s recent history, a depleted Carlton team – two men down from early in the second quarter - matched and beat a full-strength Geelong side in this extraordinary Sunday afternoon encounter at Docklands. Playing with a an intensity, cohesion and confidence rarely seen since the glory days of the previous century, the Navy Blues chased, tackled and harassed Geelong into submission, despite having their captain Marc Murphy and lively forward Liam Sumner watching from the bench.

The Blues made headlines in the lead-up, with the shock announcement that key big men Matthew Kreuzer and Levi Casboult had made miraculous recoveries from serious knee injuries, and that both would play against the Cats. Only 11 days earlier, Kreuzer had undergone keyhole surgery to repair a torn meniscus in his left knee, while Casboult's fractured left tibia had been re-diagnosed as a bone depression. Both trained freely on the Friday before the game, and came into the side at the expense of Daniel Gorringe and Liam Jones. However, in a late change, Gorringe was recalled when Ciaran Byrne withdrew because of calf soreness. 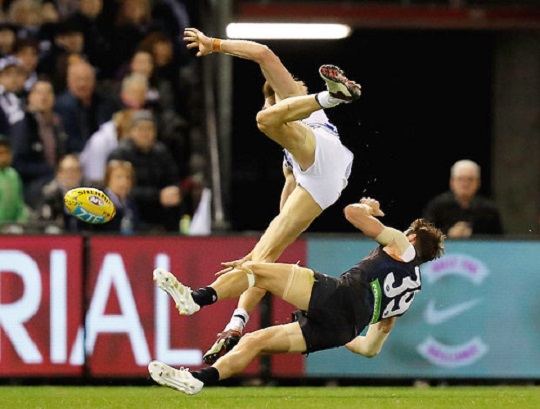 With both teams resplendent in one-off guernseys celebrating the contribution of indigenous players to the game, former Blue Lachie Henderson was given a hostile reception by the home crowd as he made his way to his position for the opening bounce, and the swelling chorus of boos was to continue throughout the match. Henderson’s opponent for much of the game, Andrew Walker, won the toss and chose to kick toward the Lockett end of the ground, but it made little difference in perfect conditions under the stadium’s closed roof.

Matthew Kreuzer took the opening bounce for the Blues, who repelled Geelong’s first couple of forward thrusts, then swept into attack through Ed Curnow, whose clever kick found Marc Murphy. Carlton’s skipper goaled from 35 metres to give his side the early momentum, but only minutes later, as Murphy scrambled for the ball on the ground, an opponent accidentally stepped on his ankle. In obvious distress, Murphy limped off the ground and out of the game. Meanwhile, Geelong began to find their rhythm. Two strong marks to their huge full-forward Tom Hawkins should have produced goals, but the big Cat missed with both attempts. The goal-kicking yips had struck at Geelong, and thankfully for Carlton, they were to remain jittery throughout the match.

By contrast, the Blues were hitting their targets and gaining in confidence. Daniel Gorringe posted the Blues second major from straight in front after a clever intercept mark, before Andrejs Everitt and Ed Curnow added numbers three and four. At quarter-time scores were level at 4.0 to 3.6, although Geelong were threatening and should have been a couple of goals up. And in further bad news for the Blues, Liam Sumner was down in Carlton’s medical room, also being treated for a damaged ankle. Liam went back on to the field briefly in the second quarter, but the pain was too much and he was parked on the bench next to his captain.

As the second quarter began, the intensity lifted and every contest bordered on the brutal. When a 50-metre penalty gifted an early goal to Geelong and they nosed in front, it seemed like they were about to seize control, but the Blues dug deep and responded. Inspired by Bryce Gibbs and Dennis Armfield - who lit up the game with his pace – Carlton surged forward in waves, and when Levi Casboult took one of his trademark grabs and kicked truly at the 18-minute mark it all but brought the house down. Armfield’s second major of the term – from 50 metres on the run, followed by another to Gibbs shortly before the half-time siren, gave his team a 20-point advantage and a huge ovation from the stands as they left the field for the long break.

Two minutes into the second half, Dennis Armfield did it again, running on to a slick handpass and slamming through his third goal. Geelong then started another fight-back that dragged them to within 13 points of the lead, before Sam Docherty found Andrejs Everitt with a neat pass and Carlton’s number 33 kicked his third to restore Carlton’s 20-point advantage. Matthew Kreuzer then single-handedly cleared the ball from the centre square, and a chain of handpasses ended with another mark in front to Gorringe, who slotted the shot. After a late reply by the Cats, Carlton was still ahead by 19 points at three-quarter time, but with two men short and half an hour to play, would the Blues run out of legs? 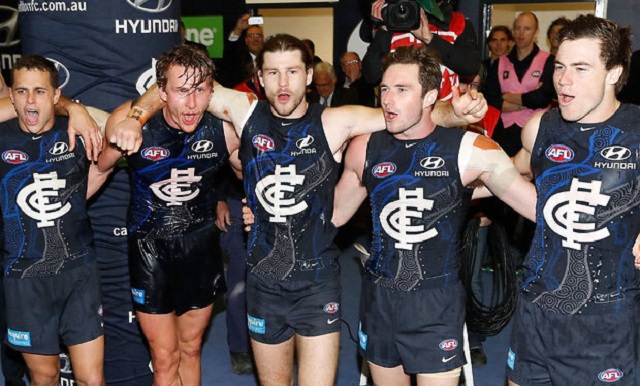 It took some time to decide, but in the end, the answer was no. Carlton’s defence was magnificent as Geelong threw everything at them for the first 15 minutes, while courage, sheer bloody-minded persistence and no small amount of skill brought goals to Andrew Walker, Jed Lamb and Everitt for a ground-breaking 19-point win. The huge roar that greeted coach Brendon Bolton as he emerged on to ground in the dying minutes of this game lifted the hearts of every Bluebagger, and signalled to the competition that at last, after too long in the doldrums, the Blues were back in business.

There were many stars in this triumph for the Navy Blues, first and foremost the charismatic young coach who continued to resurrect a broken team after less than 12 months at the helm. Under Brendon Bolton, Bryce Gibbs had lifted his game to another level, as his 34 disposals, 9 clearances, 7 tackles and two goals in this match so amply demonstrated. Who will forget the sight of Ed Curnow in that crucial last quarter, bent over and gasping for air, yet willing himself on the next contest? Matthew Kreuzer – the biggest ruck-rover in the game – fresh out of hospital to collect 15 possessions, 12 tackles and 17 effective hit-outs. Sam Docherty’s 8 marks and 30 possessions. Pat Cripps’ great last quarter. Andrejs Everitt's 4 goals. Sam Rowe quelling Tom Hawkins after a shaky start. The list goes on. Sensational effort, Blueboys.

Late Changes : Daniel Gorringe replaced Ciaran Byrne in the selected side, and Jason Tutt replaced Kristian Jaksch as an emergency.