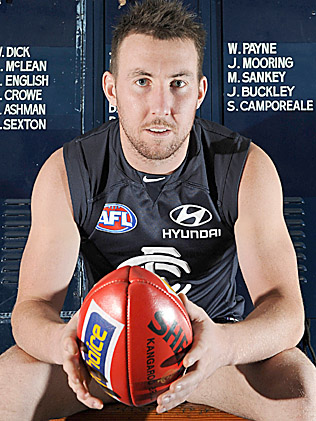 
When Melbourne traded their 94-game midfield hard nut Brock McLean to Carlton in 2009, the deal was hailed as a winner for both clubs. By recruiting McLean – the fourth member of his family to play senior football at Princes Park – the Blues added a tough and experienced competitor to their on-ball brigade. In exchange, Melbourne gained selection number 11 in the 2009 National Draft, and used it to recruit 19-gamer Jordan Gysberts.

McLean had originally been recruited by the Demons at selection 5 in the 2003 National Draft, having commenced his football journey with Aberfeldie in the Essendon District League, and later with the Calder Cannons in the TAC Cup under-18 competition. At Melbourne he quickly gained a regular midfield berth, along with respect for his ruthless attack on the football. In 2008 he finished runner-up in Melbourne’s Best and Fairest, despite being restricted to only 14 games by a recurring ankle problem.

Melbourne collected their second successive wooden spoon in 2009, but McLean was one light shining in the gloom. He averaged almost 22 possessions per game in his 19 matches for the season, only to then shock the Demons by asking to be traded to Carlton – the club where his grandfather Rod McLean (128 games) his grand-uncle Ken McLean (10 games) and his uncle Ricky McLean (19 games) had all worn the navy blue. Understandably, Melbourne negotiated hard before settling for draft pick 11 as compensation for letting him go.

McLean’s debut with his new club came in round 1, 2010, on a balmy Thursday evening at the MCG. More than 72,000 fans thronged the stadium to see McLean (in guernsey number 7) join two other recruits from other clubs in Lachie Henderson and Robert Warnock on debut for the Blues. Brock was serviceable throughout, and kicked a goal in celebration as Carlton destroyed the Tigers by 56 points.

Unfortunately for him and for the club, however, fortune turned foul for Brock in barely a fortnight later when a hip injury prevented him from having any influence in Carlton’s loss to Essendon. From then on, injuries were a continuous problem – although he was selected for his 100th AFL game (in his sixth outing for the Blues) in the round 10 fixture against the Eagles. That turned out to be his last match for the year, because he underwent surgery a week or so later, with the aim of enjoying a trouble-free 2011.

Between seasons, McLean requested a change of guernsey number from 7 to 14 - the number worn by all three of his predecessors during their careers at Princes Park. He also looked forward to a breakout year – but the Carlton team of 2011, and indeed the game itself - was markedly different to that of even a year beforehand. Athletic prowess was king in the modern game, and Brock was finding the going tough.

After he managed only four games in 2011, the football rumour mill was soon rife with conjecture about his future at Princes Park. Although his attitude and all-round skills remained first rate, and he won the Northern Bullants Best and Fairest that year, it was painfully obvious that his long-term future was decidedly shaky. Brock’s situation didn’t improve during the first part of the new season either, and he had played only one more senior game prior to round 9, 2012. By then, a raft of injuries was threatening Carlton’s finals hopes, so he was included as something of a last resort when the team to play Melbourne on a Sunday afternoon at the MCG was selected.

After an even first half, Carlton dominated the match and put the Demons to the sword by ten goals – with McLean a revelation in the midfield. Gathering 33 possessions (including 21 effective handballs) and five tackles, he used his guile and experience to great effect, and ensured that he would be in the team the following week. From then on, Brock’s second half of the year was one of the few highlights of a calamitous season. The Blues were beaten twice by bottom-four teams and staggered through the year to finish tenth – costing coach Brett Ratten his job, and bringing about the appointment of former Collingwood Premiership coach Mick Malthouse as his replacement for 2013.

While this was in train, McLean continued his resurrection, gathering 29 possessions, 5 marks and 8 tackles against Sydney in round 19, and a career-high 39 disposals in the last game of the season against St Kilda at Docklands. Prior to those two matches, he was responsible for one of the Blues more miraculous wins of recent years when his long bomb to the goal-square bounced through for full points in the last minute of the game against Richmond in round 18, to get the Blues home by 4 points. It had been a highly gratifying season for the 26 year-old, who had kept faith in his ability, worked hard to improve his endurance, and saved his career. Although he started 2012 with an uncertain future, Brock finished the year with a fourth placing in the John Nicholls Medal, as well as a new 12-month contract.

Malthouse’s first season in charge of Carlton got off to a shaky start with defeats in the first three games, although it was finishing on a more positive note when the Blues fought their way into a surprise finals berth and convincingly beat Richmond in a classic Elimination Final. Unfortunately for him, McLean had withdrawn from the match only minutes before the teams ran out, deciding not to risk a recurrence of a thigh strain he had suffered in Carlton’s round 22 loss to Essendon.

Throughout the season to that point, Brock had been one of Carlton’s prime movers. On ten occasions in the first 20 games he had gathered 25 possessions or more, and was enjoying his best season to date in navy blue - until that quadricep stretched past its limit, and it looked like he would have to put his feet up early when he could only make the emergency list for the Blues’ Semi Final clash against Sydney. On match day morning however, Carlton’s selectors opted for a late change and swapped experience for potential by including McLean at the expense of Troy Menzel. Although Brock responded with another whole-hearted effort, the Blues were well beaten, and another finals campaign came up empty.

Still, McLean's season was one of the positives for the Blues after a tumultuous 12 months, and he appeared to tick all the boxes of his performance-based contract. "There is a clause in my contract that says if I play a certain number of games I get to sign another year,” he explained in a post-season interview. “I'd have to look over that contract and see, but I think I'm pretty close. It's at the club's discretion. I'd obviously love to sign a two or three-year deal, but that's just not up to me any more. I think it'll just be one-year deals from now on, but if it ain’t broke, don’t fix it. I still don’t feel safe in the side right now; I play on edge every week,” he said. “Each week I go into a game thinking, ‘Listen, your position's not safe. You’re not a guaranteed selection.’ That seems to work for me, and I'll continue to do it as long as I keep playing well.” And that is exactly what he did. In his most prolific year yet in terms of disposals, Brock finished among the Blues’ top six in all key statistical categories (kicks, marks, handballs, tackles and goals) and was voted equal eighth Best and Fairest - sharing that honour with Chris Judd.

McLean needed all of his determination and experience in 2014, as the Blues endured a dreadful year, and wound up in 13th place on the ladder. Brock himself had an up and down season, in which he was omitted from the team early on, but soon recalled to play his best football when the pressure was fiercest midway through the year. He averaged 19 disposals and three tackles per game in his 16 matches, and made it clear afterwards that he intended to play on if the Blues wanted him. Sadly, that wasn't the case, and he was among a large group of players delisted by the club during the off-season.

McLean headed back to his original junior football club Aberfeldie for the 2015 and 2016 seasons, after his two year stint he signed to play on for a further two years at East Doncaster with former team mate Simon White. The two ex Blues would both play in back to back premierships in 2019 & 2019 for East Doncaster.