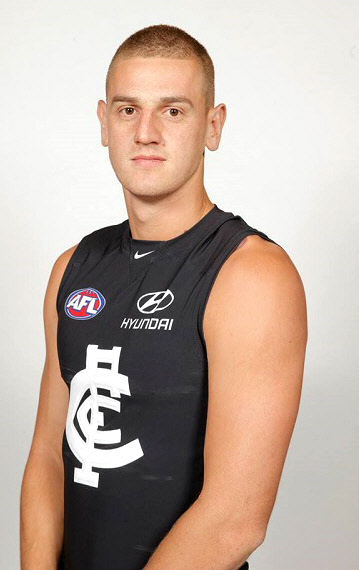 
In October 2014, Liam Jones was traded to Carlton by the Western Bulldogs in exchange for selection number 46 in the National Draft. Originally from Hobart, Tasmania, and the son of former St Kilda ruckman Bob Jones, Liam had been studying on an indigenous student scholarship at Scotch College and was only 17 when he was first recruited by the Bulldogs at number 32 in the 2008 Draft.

Over the next five seasons, Jones played 66 games and kicked 68 goals for the Bulldogs – usually as the primary marking target in attack. In 2011 he was nominated for the AFL Rising Star award, but by 2014 his form had begun to wane. "That season was a little bit disappointing,” Liam said during his first interview at Carlton. “A couple of single games were maybe some of my career-best games, then there were a few little inconsistency issues. I was put down to the VFL, and couldn't win my spot back," he said. "Last year I was maybe contemplating (leaving), but I just wanted to have another good crack. This year I spent a lot of time in the VFL, and I felt I needed a fresh start. I saw Carlton as a great opportunity. They had a lot of belief in me, and I had a lot of belief in what the club was doing here. I thought it could be a perfect fit."

Such optimism augered well for Liam, and his revitalised career seemed on track when he was selected to debut for the Blues in the 2015 season-opener against Richmond at the MCG. In front of 83,000 on a perfect Easter Thursday night, he goaled with his first kick for his new club – but from that point on, both he and Carlton crashed in a heap. As a horror season unfolded, the Blues were hammered week after week, the injury toll mounted, and coach Mick Malthouse was axed by the club board mid-season.

Jones played in eight of Carlton’s first nine games, for just one win and a return of six goals before the clubs’ patience ran out and he was dropped back to the VFL. He was recalled for another thrashing at the hands of Hawthorn in round 17, but that was to be the last seen of him before the battered shell of a once great club picked up its fourth wooden spoon.

In 2016, under his new senior coach in Brendon Bolton, Jones had to wait until round 5 for another opportunity at senior level, when Carlton travelled to Western Australia and scored a shock win over the Fremantle Dockers at Subiaco. Liam’s two goals that afternoon - including the sealer, late in the last quarter – were vital to that victory, and renewed hopes that at last he might be starting to play to his potential. However, that wasn’t the case. Midway through the year, Liam spent another lengthy spell in the VFL as his second season mirrored his first. Averaging 9 possessions and 3 marks per game, he kicked 9 goals in 8 matches - five of which were wins by the Blues. Although those figures are modest, it must be recognised that Jones was all too often isolated in Carlton’s attack, and that delivery of the football to him was often haphazard.

Jones entered his third (and last) contracted year deep in the seconds, before a remarkable story began to unfold. Tried in defence, Jones' natural athleticism saw him start to become a key defender. Tried in the firsts, a stunning run of form over the last 12 games of the year saw Jones take on and defeat some top notch forwards, and in to our Top 10 in the B&F. Jones capped off his amazing 2017 season by finishing with the highest average one percenters per game in the AFL. With the turnaround Jones secured a contract extension and the adulation of the fans.

2018 was a tougher year as his defensive comrades fell away with injury. Given the lack of structure, Jones' propensity to play off his man meant he was often caught out. Nonetheless, he was still our key defender and when he went down in Round 17 he was sorely missed. Another Top 10 performance ensued.

Jones had a very consistent season 2020 where he formed a fantastic partnership with Jacob Weitering to help keep the majority of the game's best forwards to minimal or no goals. Jones finished the season ranked no.1 in the competition for one percenters and was also nominated for the AFLPA Most Courageous Player by his teammates.