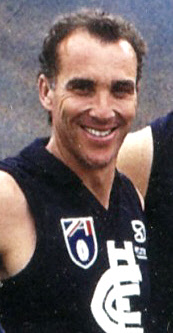 In his one season as assistant coach at Princes Park – in Carlton’s glorious Premiership year of 1995 – former Hawthorn forward Ken Judge made such a strong impression that he was recalled by the Hawks to be their senior coach the following year. No stranger to success, Judge already had a string of flags to his credit prior to joining the Blues, and would eventually be appointed as senior coach of two other AFL teams.

Born in Western Australia, Judge rose to prominence as a clever and dangerous half-forward with East Fremantle. In 1979 he played in the Sharks’ WAFL Grand Final victory over arch-rivals South Fremantle, and the following year was Old Easts’ leading goal-kicker with 63 majors. During those two seasons he represented WA three times in interstate matches, and that led to serious approaches from AFL clubs South Melbourne and Hawthorn.

Eventually, Judge chose the Hawks, and finished his debut year as a member of their 1983 Premiership team. Two more Grand Finals followed in 1984 and ’85, but the Brown and Gold were beaten both times. Then in 1986, after playing 72 matches and kicking 158 goals for Hawthorn – at the outstanding average of 2.2 per game – Ken bid farewell to Glenferrie Oval and returned home to WA. By then it seemed that he would see out his career at the Sharks, but there was another twist to come. Late in the year, the Brisbane Bears came calling with their cheque-book at the ready, and soon Ken was back in the AFL in the magenta and gold strip of the Bad News Bears. During 1987-88, Judge added another 17 games and 18 goals to his tally before completing his contract and announcing his retirement as a player.

Returning once more to East Fremantle, Judge took over as senior coach of the Sharks and made himself a club legend by taking his team to WAFL Premierships in 1992 and 1994. Of course, those exploits did not go unnoticed on the other side of the continent, and the following year Ken rolled up at Princes Park to begin his first and only season as an assistant coach under David Parkin at Carlton. As every Bluebagger knows, the Navy Blues dominated the competition that year, and lost only two games on the way to demolishing Geelong in a one-sided Grand Final.

Afterward, Parkin was generous in his praise of Judge, and that was good enough for Hawthorn. Ken replaced Peter Knights as the man in charge at Glenferrie Oval in 1996, although for once his impact was unspectacular. The Hawks’ best season under his stewardship came in 1999, when they finished ninth.

Meanwhile, back in WA, the West Coast Eagles were searching for a senior coach after the resignation of Mick Malthouse, and those making the most noise were calling for a local to take the job. Judge stood out under that criteria, and in 2000 he was anointed – becoming the fourth man to hold the post in 13 years. Once more however, consistent success eluded him and the Eagles won only 12 games before he was replaced by John Worsfold.

After leaving the Eagles, Judge embarked on a media career that made him one of WA’s best-known football writers and commentators. What was not generally known however, was that by then Ken was fighting myeloma, a rare form of bone marrow cancer. Early treatment seemed to been successful, but he suffered a relapse in 2012 and passed away on January 15, 2016 – his 58th birthday.