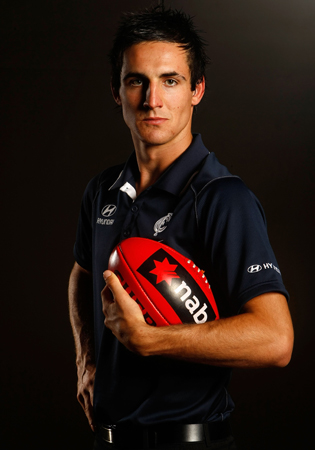 Beginning his football career at Trinity College in WA, Kane Lucas represented Melville and Winnacott junior football clubs before he was recruited by East Fremantle in 2009. He played 12 senior games in the WAFL during that year, while also representing his state in the Under-18 National Championships. His hard running and smart disposal won him All-Australian selection as a medium forward, prompting Carlton to snap him up with selection 12 in the National Draft - as part of the deal that brought Lachlan Henderson to Princes Park, and sent Brendan Fevola to Brisbane.

Speaking to Carlton's website at the time, Recruiting Manager Wayne Hughes said; “We picked Kane for his ball-reading ability in the middle, and good use of the ball. He’s smart in traffic, and his athletic abilities give him the ability to play midfield rotation. Quick, good agility, good spring - just an all-round good package for us.” On top of this, Kane's draft camp results were impressive, with his 20 metre sprint time of 2.9 seconds, and a beep test of 14.4 the highlights. On arrival at Princes Park, he was allocated Carlton’s guernsey number 24, previously worn by another midfield athlete in Nick Stevens.

Carlton’s match committee chose to give Lucas his baptism of fire at senior level against Essendon in round 3, 2010 in front of a typically massive crowd at the MCG. Starting from the bench (as he would do regularly throughout his debut year) Kane’s 16 possessions, 3 marks and 7 tackles was a solid first-up effort. The Bombers won by 20 points, but Lucas only had to wait another week to celebrate an away victory over Adelaide on the way to playing his first eight matches in succession. About this time, he was given the nickname “Sugar” Kane by team-mates, and supporters soon followed suit.

The first setback to the youngster’s burgeoning prospects came in the opening quarter of Carlton’s round 8 fixture against Port Adelaide at AAMI Stadium. While chasing hard, he strained his left hamstring and hobbled off the ground. Five weeks later he returned, but was playing only his second game back when the same tendon tore again. This time, the damage was more severe. Scans revealed a worrying problem with his hips, and he underwent operations on both joints with the knowledge that his maiden season had come to a premature end, and that it could take as long as nine months to regain full fitness.

Those disappointments probably played a part in Kane’s decision to swap to guernsey number 9 after just one season in 24, but the way he hobbled into Carlton’s end of season presentation night on crutches to collect his Best First Year Player award showed just how hard he was working on his rehabilitation. He emerged from his 2011 pre-season program in top condition, and was welcomed back into the senior team for the opening game of the season against Richmond. On that balmy night at the MCG, he earned a niche in AFL history by being selected as the Blues’ (and the game’s) first substitute - under a new rule that prevented the player replaced from returning to the field. Lucas was called into the fray for a concussed Jarrad Waite in the second term, and celebrated a 20-point win over the Tigers.

Perhaps believing that he was still underdone, Carlton’s match committee sent Kane back to the VFL after just that one run, and before long he was stringing some consistent performances together for the Northern Bullants. Then he strained a medial ligament in a knee, costing him another six weeks. Again, he put his head down and his butt up in during his recovery program, and by July was running around once again in the Bullants strip, doing all he could to earn a recall for the finals-bound Blues.

Sure enough, after being named as an emergency for round 23, Lucas pulled on the fluoro yellow vest of the team’s substitute once more when Carlton met St Kilda at the MCG in the last round of the season. When Matthew Kreuzer complained of numbness in one of his feet, Kane was sent on early and collected 21 possessions and 7 marks. That one senior opportunity at the end of a hard and disappointing season was welcome encouragement for Sugar, although he didn’t make the cut for either of the Blues finals line-ups. Still, his short-term future seemed secure when he agreed to a new 2-year contract in October, 2011.

The 2012 season began with a bang for Lucas, when he was sent onto the field as Carlton's substitute in round 1, and kicked 2 goals in five minutes - his first senior goals. The Blues beat the Tigers by 44 points that night, and a fortnight later the club was sitting on top of the ladder, undefeated. From then on however, Kane and his team lost their way. Carlton was humiliated by Essendon in round 4, as injuries to key personnel and a worrying lack of intensity began to destabilise the side. Sugar played the first six matches straight (four of them from the bench) but his form was patchy, and even an 11-goal demolition of the GWS Giants in round 6 couldn’t save him from demotion to the VFL the following week. He earned a recall as the substitute for Carlton’s huge win over Melbourne in round 9, and then waited until round 16 for what turned out to be his last senior outing for the year, when a wounded Blues line-up was demolished by North Melbourne at Docklands.

At the end of that tumultuous season for all concerned, the Blues parted ways with senior coach Brett Ratten, and appointed veteran three-time Premiership winner Michael Malthouse as his replacement for 2013. A change of coach inevitably provides opportunities for players who are ready and willing to embrace a new challenge, and this appeared to be the case with Lucas. Sugar showed real improvement at first under Malthouse, playing 17 matches and kicking 9 goals prior to round 19. In three of his better efforts, he chalked-up 29 disposals and 7 marks against Melbourne in round 6, 20 possessions, 8 marks and 3 goals against Brisbane in round 9, and 33 disposals and 8 marks against Collingwood in round 15. However, he missed out on selection for either of Carlton’s finals matches, and it appeared that the jury was still out in regard to his long-term future.

In 2014, Carlton’s confident expectations of another finals campaign were shattered before the half-way stage of the season. After losing the first four games straight, Malthouse’s men staggered through the rest of the year to finish 13th on the ladder. Kane played in five of the Blues’ first seven matches, and earned a recall for the last two games of the season, but he was serviceable at best and once again, he wasn’t able to put his stamp on a regular place in the team. In late October of that year, Kane's career at Carlton came to an end, when he was told that his services were no longer required.

A few weeks later, the West Coast Eagles threw Kane a life-line when they picked him up with selection 10 in the 2014 Rookie Draft. However, although he was named as an emergency for the Eagles on a couple of occasions over the next two seasons, he wasn’t able to break into their team, and for the second time, was delisted in September, 2016.

Lucas played for East Perth in the WAFL whilst on the Eagles rookie list, a knee injury suffered in Rd 15 of the 2016 season resulted in Lucas retiring from football altogether.