From Portlaoise with purpose.... 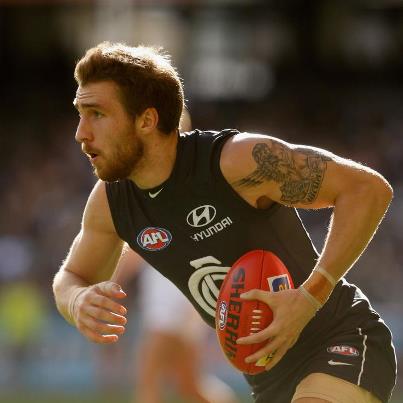 Before crossing the world to embrace a foreign code, Zach Tuohy was a promising Gaelic footballer at the Portlaoise (‘Port-leash’) club in Ireland. In 2008, the 18 year-old caught the eye of Carlton recruiter Gerard Sholly, and was invited to Melbourne to take part in a four-week trial. Even before that time was up, the Blues were sufficiently impressed by Tuohy’s potential to offer him an International Rookie contract, and a few weeks later, he landed at Princes Park as selection 73 in the 2010 AFL Rookie Draft. Half-way through his second season he was promoted to Carlton’s senior list, and went on to play more than 100 senior games.

Following a crash course in the basics of the game, Tuohy spent 2010 finding his way with Carlton’s VFL affiliate, the Northern Bullants. He learned quickly, showing promise at first as a tagger, and later as a rebounding half-back. Partly because of a surprising aptitude for the game, and partly because he had diligently practised kicking the oval ball even before leaving his homeland, his kicking skills were soon elite, as was his awareness.

In mid-2011, Zach was elevated to the senior list in place of the injured Luke Mitchell, and named in Carlton’s squad for the trip to Football Park in South Australia for the round 11 clash against the struggling Port Adelaide. Tuohy became the sixth individual to wear guernsey number 42 in a senior match for the Blues on that wet Sunday afternoon, but sat on the bench as Carlton’s substitute until well into the last quarter, as the finals-bound Blues thrashed the home side by more than ten goals.

Included in the starting line-up that played Brisbane at Docklands the following week, Tuohy made people sit up and take notice with a dashing game off half-back - highlighted by a booming 55-metre goal off his right foot early in the last quarter. From then on, Zach played all but three of Carlton’s remaining games in the home and away season. After being named as an emergency for the Elimination Final against Essendon, he was given a huge thrill when he was a late inclusion for the Semi Final against West Coast at Subiaco, when Bryce Gibbs was ruled out with a shoulder injury. Tuohy was made Carlton’s substitute, and was sent on at half time to replace the concussed Bret Thornton. In a terrific contest, the dogged Blues forged back into contention half way through the last quarter when Tuohy soared for a confident high mark just outside Carlton’s forward 50. As soon as he landed, he sensed that he had space - so he played on, and bombed another beautiful long team-lifter that cut the margin between the teams to 9 points. Although the Eagles held on to win by 3, and knocked the Blues out of the finals race, one of the upsides from 2011 for the Carlton Football Club was that we had found another good one in the Irishman with a lethal right foot.

Tuohy emerged from Carlton’s 2012 pre-season with a harder body, a new intricate tattoo on his left upper arm, and noticeable maturity. When the upstart Blues surged through the first three matches undefeated, and smashed Collingwood by ten goals in round 3, Zach was resolute and composed in his best game to date. Unfortunately for all concerned however, that was to be the high point of Carlton’s year. By mid-season, the Blues had suffered a spate of injuries that triggered a slump and condemned the club to a soul-destroying tenth place finish – despite the bloody-minded persistence of Carlton’s Irish import. Whilst the pressures of a long, hard season did eventually tell on him, Zach was always up for the big assignments. Forced to curb his attacking flair, he knuckled down to the role of a lock-down defender, and continued his learning curve by racking up another 19 matches. 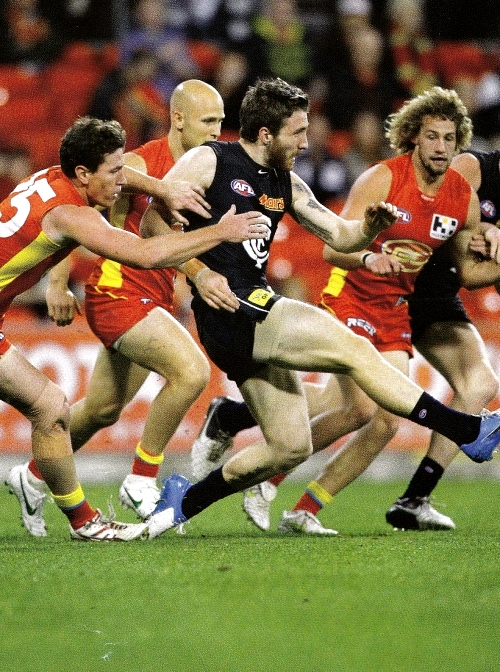 At the end of 2012, after five barren seasons, coach Brett Ratten was sacked and replaced by the vastly experienced former West Coast and Collingwood Premiership coach Mick Malthouse. Tuohy and Malthouse quickly established rapport, and Zach took another step forward in 2013 to produce his best season to date. Playing in all of the Blues 24 matches for the year (including both finals) he often led by example, and contributed a more than handy 13 goals as his team-mates and the Carlton crowds urged him “have a ping” at the big sticks from long range. On two occasions – in round 10 against GWS, and round 19 against Fremantle – Zach booted three goals for the match, sparking calls for him to be given a role in Carlton’s midfield.

However, that didn’t happen before the Blues were bundled out of the 2013 finals by Sydney, and Tuohy briefly returned home to Ireland to represent his country in the International Rules Series against Australia’s Indigenous All Stars. The Irish team comprehensively won both Test matches in the series, with Tuohy judged Man of the Match in the first match at Breffni Park in County Cavan.

Back at Princes Park in 2014, Zach and his team endured another dreadful season - beginning with four straight losses, and ending with the Blues in 13th place on the ladder. Although wins were few and thrashings all too frequent, Tuohy played consistent football to average 14 disposals in 22 games. His key performance indicators improved in a variety of close-checking defensive roles, but as a consequence his scoring opportunities dried up, and he added only 4 goals to his career tally.

To make matters worse, season 2015 at Princes Park was another disaster. After losses in the first three games, coach Malthouse was sacked in late May, then champion Chris Judd wrecked a knee and was forced into retirement. Although his team was often overwhelmed, Zach remained focussed in all of Carlton’s matches. He was given big assignments week after week and rarely lowered his colours, despite the fact that Carlton celebrated victory only four times over a wretched season and collected the wooden spoon. In September, Tuohy’s big-hearted season was recognised when he finished third behind Pat Cripps and Marc Murphy at Carlton’s Best and Fairest awards, before being included in the AFL Coaches Association 2015 All Australian Team.

It was a similar story again in 2016. Under the Blues’ new senior coach Brendon Bolton, Zach played his 100th senior game in a big loss to Sydney in round 2, and didn’t miss a match as Carlton improved marginally to win 7 games and climb to 14th on the ladder. Had the Blues’ attack been able to match the grit and obstinacy of the back six, those numbers might have been better. Defenders Sam Docherty and Kade Simpson topped the Best and Fairest votes, Sam Rowe finished equal sixth, and Tuohy was eighth, after another consistent year highlighted by his 25 possessions and three goals against St Kilda in round 20.

Heading into the 2016 trade period, Carlton supporters were cautiously optimistic that better times lay ahead - until Tuohy shocked everyone at the club by rejecting Carlton’s contract renewal offer, and requesting a clearance to Geelong. The Blues put a three-year deal on the table, but it seems that Zach was weary of constant defeat and ready for change. Because he was out of contract, Carlton either had to trade him, or face the prospect of seeing him walk out the door without compensation.

Thankfully, sanity prevailed and after some heavy negotiations, Tuohy became a Cat in a complicated deal. Geelong handed over their number 63 selection in the 2016 National Draft, plus a future first-round draft pick, along with their talented, but injury-prone midfielder Billie Smedts. In return, Carlton let go of Tuohy and a future second-rounder, in a satisfactory outcome for all concerned.

Tuohy’s full name is Zachary Martin Nathan Tuohy, and he is the youngest of four children. Neither his parents, his siblings nor his extended family have previously shown any aptitude for sport.

Zach’s father Noel was a warder at the Portlaoise maximum security prison for over 30 years. He retired in 2012, and began working on his memoirs.

Before each game, Tuohy inscribes the letters “PM” on the strapping on each of his wrists. They are the initials of a close friend and former team-mate; Peter McNulty, who tragically took his own life in 2010.