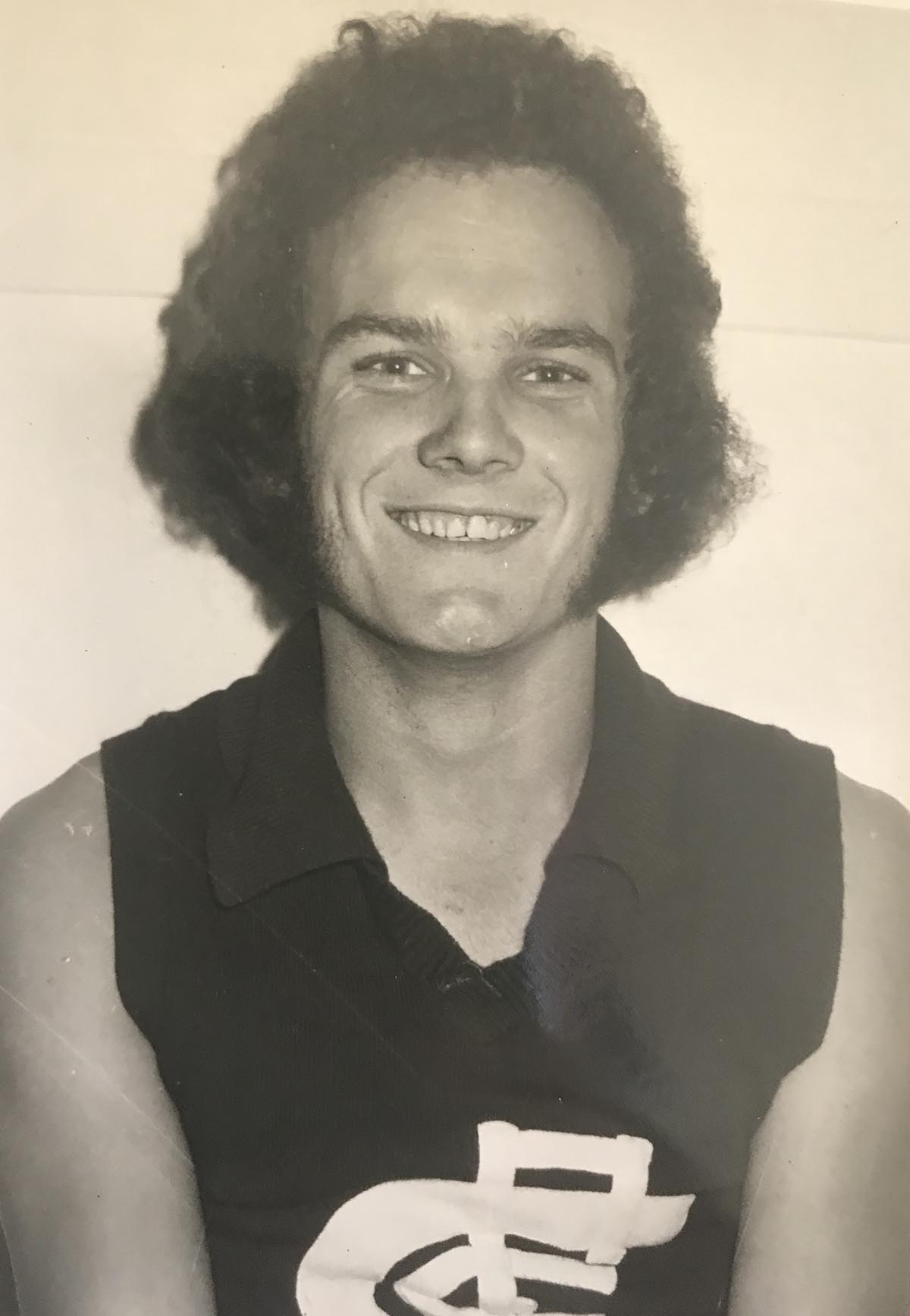 Unmistakeable because of his thick mop of hair and his distinctive kicking style, Rod ‘Curly’ Austin was a versatile defender who was renowned for ‘playing tall’ throughout his 200 games for Carlton from 1972 to 1985. After winning Premiership glory with the Navy Blues in 1979, he was kept out of the 1981 and ’82 flag sides by injury.

Rodney Albert Austin was born on Australia Day in 1953. When he was still very young, his family moved to England, but they returned a few years later and Rod began his education at two of the northern suburbs’ best known Catholic schools; Holy Child and St Dominic's College. While at the latter, his football talent stood out and he was recruited by Carlton’s Under-19 squad. By 1972 he was playing Reserves football at Princes Park in guernsey number 45, when he was dubbed “Curly” by Blues captain-coach John Nicholls. Promoted to the senior side for the first time in round 6 of that season against Geelong at Princes Park, Austin spent most of the match on the reserves bench as the Blues won comfortably.

After four games in his debut season, Austin switched to number 21 in 1973 and continued to press for a regular place in a powerful Carlton side that had won three of the previous six Premierships. Although he scaled only 180 cm and 80 kg, Curly was an attacking defender who preferred to play in front. His exceptional judgement and spring allowed him to match up on just about anyone, and his disposal was sharp. Early on he was seen as a back pocket, but soon settled on a half-back flank and, with experience, showed that he was by no means out of his depth at full-back.

Austin wrote his name into Australian Football folklore in July, 1977 at Princes Park, when he deputised for Carlton’s champion full-back Geoff Southby against Hawthorn, and kept the Hawks’ goal-kicking machine Peter Hudson goal-less on one of just three occasions in Hudson’s brilliant 129-game, 727-goal VFL career. Curly gave away height, weight and experience that day, but his steely concentration proved too much for the Hawthorn star and Carlton won by 14 points.

Two years later, Austin returned from injury on the eve of the finals and was selected on the bench for the Grand Final against Collingwood. On a sodden MCG, in front of more than 112,000 fans, the Blues beat their fiercest rivals by five points, thanks to some desperate late brilliance by Wayne Harmes. With just two minutes or so left on the clock, Harmes’ committed chase, dive and swipe at the ball in the right forward pocket delivered the ball to Ken Sheldon, who goaled to seal Carlton’s twelfth Premiership. Curly was in a back pocket on the siren, having come off the bench early to allow Harmes to push forward.

The Blues finished the home and away rounds of season 1980 second on the ladder by percentage, only to crash out of the finals after successive defeats. Coach ‘Percy’ Jones was promptly sacked, and former Hawthorn captain and Premiership coach David Parkin appointed in his place. Austin blossomed further under Parkin’s coaching, playing solid, dependable football throughout 1981, in a rock-hard Blues defence.

The 1981 season started well playing seven of the first eight games before a nagging groin injury hampered his season, he would play another three games from rounds 12 to 14 but by then the injury had become so bad he would not play again that season, the injury was later diagnosed as being osteo-pubis. That setback ruled him out for the remainder of the 1981 season, so he would watch from the stands when the Blues rebounded from 21 points down in the third quarter to skittle Collingwood for the second time in three years. This injury cruelly robbed Austin of a certain second premiership medallion, he and Carlton champion Geoff Southby both missed out on playing in this premiership team due to injuries.

The injury from the 1981 season would hamper Austin during the 1982 season whereupon he would manage just the10 home and away games after missing the opening four games of the season. But Parkin and the match committee knew fully well the value Austin was to the team and managed him through the 1982 season knowing that a fully fit Austin in the finals would be an asset to the team's goal of achieving back to back flags. Carlton’s superb 1982 back-to-back Grand Final victory over Richmond came after one of the toughest finals campaigns in this clubs’ history. Ending the home and away rounds as the third of five finalists, Parkin’s Blues beat Hawthorn in the Qualifying Final, lost to Richmond in the Second Semi, then faced the Hawks again in the Preliminary Final for the right to play Richmond for the flag.

Parkin knew the key to victory over Hawthorn was to limit the influence of their champion Leigh Matthews, and the man he turned to was Curly Austin. Barely five minutes into the game however, Matthews crashed through Austin and knocked him senseless. After being revived on the field, Curly refused to be taken off. He ran back to his position, chested Matthews with an attitude that said; “is that the best you can do?” then proceeded to cut the Hawks’ gun forward out of the game. Carlton won by five goals, Austin won the Blues’ Best Player award, and looked forward confidently to another Grand Final appearance – at least until midway through the next morning’s training run. 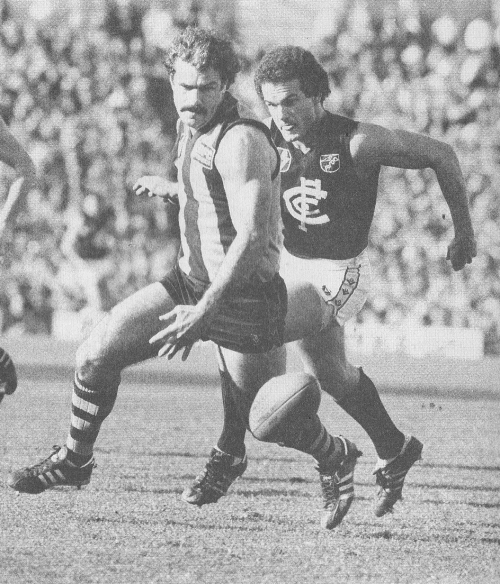 During one of the drills that Sunday morning after the preliminary final (a 'friendly' game of soccer), Curly was accidentally kicked in the thigh by Blues team-mate Frank Marchesani, Austin was playing as the goalkeeper to keep him out of harms way!!! Deep bruising appeared, and by Tuesday afternoon it was obvious that Austin wouldn’t be playing, despite this Austin was still named in the team on a half back-flank to take on the Tigers! On Grand Final day he was laid up in a hospital bed, as Carlton – led magnificently by captain Mike Fitzpatrick and ‘The Dominator;’ Wayne Johnston - upset the Tigers to win the Blues’ fourteenth Premiership. As a testament to the club’s regard for Curly, coach Parkin and a group of senior players made his hospital ward their first destination after the game, taking the Premiership Cup along with them.

That was to be Austin’s last chance at further Premiership glory. Nevertheless, he continued playing consistent and reliable football for three more seasons before retiring as a player after Carlton’s early exit from the 1985 Finals. After hanging up his boots, Curly moved on to coaching. He joined the match committee at Footscray in 1986 under Mick Malthouse, and took the Bulldog Reserves to a flag in 1988. The following year he was appointed senior coach at Fitzroy for two years, and in 1994-95 he was in charge of the Victorian State of Origin team. He then accepted a position with the AFL in talent identification, and travelled on the first trip to Ireland with an Under 17 Australian team. Along with Kevin Sheehan, he modified and further developed the TAC Cup and draft camp pathway for elite junior footballers, while acting as an advisor on the draft and the trading in general.

Meanwhile, he remained a celebrated figure at Princes Park, and was elected to the Carlton Hall of Fame in 1997.

Austin's son, Nick Austin played one Reserves game for Carlton in 2002, but his main claim to sporting fame came with the Carlton Cricket Club as a left-arm opening bowler. Nick made history in November 2012 when he played his 200th game of cricket for Carlton, making Nick and Rod the first father-son combination to play 200 games of League football and 200 games of Premier League or District Cricket.

Rod Austin originally grew up Port Melbourne, in close proximity to South Melbourne, and originally supported the Swans. But after returning home from England some years later, the Austin family settled in the Carlton recruiting zone of Broadmeadows before Curly joined the Blues.

During 1971 and 1972, Austin briefly wore guernsey numbers 51 and 53 whilst playing Reserve grade football for the Blues.