This game reveals on how inconsistent the Blues were this season. After losing to the bottom side Fitzroy last week, they come out and beat the reigning premiers Hawthorn the following week. If only they could harness this ability on a consistent basis.

One of only THREE games where Peter Hudson was kept goalless, by none other than the human blanket, Rod Austin (Geoff Southby was still having issues with Carlton).

At one stage late in the game, Hudson found himself near the fence in front of the soon to be completed Hawthorn stand, and a Carlton fan had a swipe at him, to which Huddo took umbrage. Of course, the majority Carlton crowd lapped it up.

Barry Armstrong played a sterling game for the Blues through the midfield continually driving the ball deep into the Blues forward line. Carlton full-back Rod Austin became a history maker, keeping Hawthorn's Peter Hudson goal less in a great defensive game that nullified the Hawk champ. - Inside Football Player of the Year.

Faced with the prospect of losing their place in the Five, Carlton rose to the occasion and although the Hawks fought hard to make up the leeway of 4.5 they trailed at three quarter time, the Blues won by 14 points. They held Hawthorn to their lowest score in the last 22 games against Carlton in the slush of Princes Park and thoroughly deserved their victory. Possibly the hard Tuesday night game took its toll on many Hawks, who appeared to be sluggish and didn't handle the conditions as predicted. - Football Record.

Hawthorn forward Peter Hudson was held goaless for only the second time in his career as Carlton full back Rod Austin proved too good. The Blues won the match by 14 points with their backline performing brilliantly, restricting the Hawks to just seven goals for the match. During the week Tony Southcombe left Carlton to return to Golden Square. - Football Record. 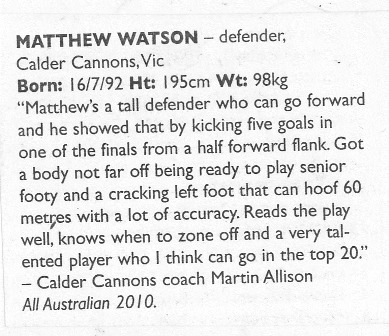