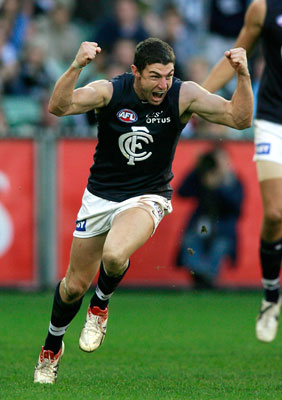 
The glue that holds any football club together is loyalty, and no quality is more highly respected than that which sees an individual stick to their chosen colours through good times and bad, for better or for worse. Simon Wiggins fitted precisely into that category throughout his decade-long, 116-game career with the Navy Blues from 2001 to 2010, bringing dedication and big-hearted commitment to a Carlton side at its lowest ebb in our club’s long and proud history.

Nicknamed ‘Wiggo,’ ‘The Wiggler’ or ‘The Chief’ (after Chief Clancy Wiggum; a character from the hit television show The Simpsons) Simon was drafted by the Blues from the Tassie Mariners Under 18 side, after rising to prominence as an outstanding junior with the Glenorchy Magpies. Carlton’s third selection in the 2000 National Draft (number 15 overall), he is the younger brother of Patrick Wiggins, who was himself recruited by the Western Bulldogs in 1999. A tall, mobile ruckman, Patrick managed only 12 senior games in an injury-ravaged, three-season stay at the Western Oval.

Like Patrick, Simon battled hamstring problems throughout his career, as well as knee and shoulder injuries. Versatile, if somewhat prone to inconsistency, he never managed to play out a full season with Carlton’s senior team, but his professional attitude and cheerful demeanour helped keep spirits up at Princes Park, even as the Navy Blues languished on the lower rungs of the ladder in seven of Wiggo’s ten seasons. In fact, the only finals match of Simon’s career was his last; Carlton’s 2009 Elimination Final loss to Brisbane at the Gabba. He was retained on the Blues’ list in 2010, but couldn’t force his way back into a steadily-improving young team, and so retired at year’s end.

Wiggo played his first game for Carlton in round 5, 2001 against St Kilda at Princes Park, wearing the number 34 guernsey previously carried with distinction by Ron De Iulio. Included on the interchange bench, he turned heads when he came on, by flying for a strong mark, and goaling with his second kick. Although Carlton won by 33 points, Wiggo was left out the following week, and wasn’t recalled until round 12. He finished his first season with six games and three goals to his credit, although he couldn’t win a place in the line-up for either of Carlton’s finals matches, and didn’t get another opportunity to play on into September for another eight long years.

Carlton’s recruiting decisions between 1999 and 2001 were singularly unsuccessful, with Wiggins, Ryan Houlihan and Jarrad Waite the only real success stories. Wiggo averaged 14 games per season between 2002 and 2005, playing in a variety of roles in defence and attack as he became Carlton’s Mr Fixit. Meanwhile, the Navy Blues fell foul of the AFL Commission, and paid a heavy price. Huge fines and draft penalties for salary cap breaches condemned the club to wooden spoons in ‘02 and ’05, and a best result of eleventh in 2004. Yet through all the turmoil that those events produced, Wiggo soldiered on, doing whatever he was asked to do to help the side, and playing wherever he was required.

Season 2006 loomed as la make or break year for Wiggins. He started the year in the VFL and wasn’t called into the senior side until round 6, but took full advantage of his opportunity and missed only one match prior to round 20, when he suffered a big hit that fractured his eye socket. Before being injured he was primarily played as a leading half-forward, regularly taking contested marks with sure hands. He was also utilised to good effect as a deep half forward flanker or wingman, winning a lot of the football as Carlton's flooding tactics dragged our forward line closer to the defence. Two goals in a terrific opening quarter full of searching leads in our brave challenge to the West Coast Eagles in round 11, 2006 sticks in the mind. Carlton continued to struggle however, and a third wooden spoon that year heralded the sacking of coach Denis Pagan less than 12 months later.

A different game plan was adopted in 2007, and Wiggins' effectiveness seemed to decline because of it. Included for the first five rounds of the season, and playing still at half-forward, Wiggo’s stats fell to an average 9.8 disposals and 3.8 marks per game - with zero goals. A determined, gut-busting effort against Geelong in round 2 brought praise, only for hamstring tightness to sideline him between rounds 6 and 9. Back into the team again for round 10 against the Western Bulldogs, he came off the bench and was a pivotal player at half-forward with 8 marks and 14 telling possessions as Carlton edged out the Dogs by 10 points. A few weeks later, former captain Brett Ratten replaced Pagan as Carlton’s coach, and the Blues narrowly avoided a fourth wooden spoon by finishing 2 points clear of last-placed Richmond.

Apart from his inclusion in Carlton’s two pre-season NAB Cup Grand Final victories in 2005 and 2007, perhaps the highlight of Wiggo’s career was his outstanding performance in his 100th game for the Blues in round 17, 2008. Throughout his career, Simon always seemed to save his best for games against the Doggies, and this one – played on a Sunday afternoon at Docklands Stadium - was no exception. Originally named to play at half-back, Wiggo went forward before the opening bounce and became the 7th Tasmanian to crack the century at Carlton, when he had 17 disposals at 82% efficiency, and kicked 4 very good goals. Carlton skipper Chris Judd was inspirational for his team, and rightly picked up three Brownlow Medal votes, while Wiggo collected two votes (the first and only of his career) after the 11th placed Blues knocked over the team sitting second on the ladder, by 28 points.

Wiggins started season 2009 with a another impressive effort in Carlton’s spectacular round one drubbing of Richmond on a warm Thursday night at the MCG. More than 87,000 fans packed in to the home of football to see Wiggo collect 21 disposals, including 10 marks (one a real screamer), 8 tackles, and 2 goals. Although his form tapered mid-season and he spent some time in the Reserves, a late-season recall to shore up a shaky defence saw him rack up another 14 matches - including his first-ever final for Carlton, in that bitterly-disappointing Elimination Final loss to the Brisbane Lions on a balmy Saturday night at the Gabba.

Wiggo lined up in a back pocket on that fateful evening, alongside Bret Thornton and Paul Bower. Like most of the 32,000-strong crowd, he must have thought that Carlton was about to progress to the second week of the finals when the Blues held a 24-point advantage at three-quarter time, but that belief turned to ashes as the Lions mounted a last-quarter charge and over-ran their visitors by seven points. He didn’t know it at the time, but Simon Wiggins had just played his 116th and last game in navy blue.

Before the ultimate end however, there were a few more achievements to savour. In 2007 Simon married Commonwealth Games platform diving gold medallist; Loudy Torky, and their first child was due to greet the world in late 2010. At the 2008 AGM, Wiggins was recognised with Life Membership of the Carlton Football Club. The announcement was greeted with enthusiastic and sustained applause, leaving no doubt as to the respect he had earned over eight tough seasons. Then, in both 2008 and 2009, he was nominated by his peers for the AFL Players Association’s Robert Rose Award – presented each year to the player considered as the most courageous in the competition.

In 2010, Wiggo was elevated to the club's leadership group, only for his season to be ruined by a succession of injuries. Although he eventually made it on to the park for ten appearances with Carlton’s VFL affiliate the Northern Bullants, he was never really in contention for a senior recall and so retired in September. Coach Brett Ratten summed up the mood of everyone at Princes Park when he said; “Simon has been a loyal and selfless team player over many years with Carlton. He has been a great clubman, with whom I have had the pleasure not only play alongside, but also to coach. Wiggo was also a popular character around the place, and it is fitting that he leaves the club as a life member and 100-game player.”

In 2011, Wiggins headed to WRFL Club Sunshine Kangaroos to play alongside his brother Patrick.