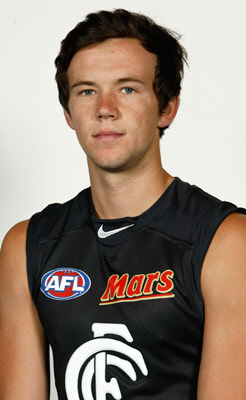 
Another young man with a notable sporting pedigree, Frazer Dale was Carlton’s third selection in the 2011 AFL Rookie Draft. His father Andrew had played two senior matches for Melbourne in 1986, while his uncle Adam Dale appeared in two Test matches and 30 One Day Internationals for the Australian cricket team between 1997 and 2000.

Born in Benalla in Northern Victoria, Frazer started his junior football at Myrtleford / Myrtleford Juniors before moving on to Assumption College at Kilmore, and then to the Calder Cannons in the elite TAC Cup Under-18 competition. Two impressive seasons with the Cannons brought him to the notice of Carlton’s scouts, resulting in his name being called by the Blues at number 50 in the Rookie Draft, behind Tom Bell at 14, and Nick Heyne at 32.

At the time, Carlton Recruiting Manager Wayne Hughes summed up Dale’s potential this way; "He's a good size to become a winger or midfielder. He's very strong aerobically - does a 14 beep - and a good mark overhead. His body will need to build up, because he's only a youngster obviously, but we're pretty happy to have him."

Dale was given an early taste of AFL football during the 2012 pre-season NAB Cup, before a series of eye-catching performances with the Northern Blues led to his selection as an emergency for Carlton’s round 10 match against Port Adelaide. He flew across to AAMI Stadium with the team, but in the end wasn’t required. A few days later, he was elevated to Carlton’s senior list to replace Sam Rowe – whose battle with testicular cancer had seen the former Sydney Swan placed on the long-term injury list.

Throughout the month of July, Carlton’s playing stocks continued to be decimated by injury and suspension, to the extent that the Blues went into a crunch match against the Western Bulldogs on a Saturday night in late July, without a recognised ruckman, or the team’s entire first-choice half-back line. Then shortly before the opening bounce, Mitch Robinson withdrew because a calf strain, and Dale was called in to replace him.

Designated as Carlton’s substitute, Frazer sat on the sidelines until early in the last quarter, before racing out onto the ground to help the Blues to a gutsy win. In the final moments, he took a mark just inside Carlton’s 50-metre arc, and coolly slotted his first career goal - after the siren - to seal a gutsy 18-point win.

Retained in the side for the following week’s clash against traditional rivals Richmond at the MCG, Dale (again named as Carlton’s substitute) came on to the ground in a hectic last quarter to replace Nick Duigan. He was in the thick of the action as the Blues trailed by 2 points with a minute to play, and celebrated a sensational win when midfielder Brock McLean’s long bomb bounced through for full points in the dying seconds of a memorable game.

Back with the Northern Blues to finish off the year, Dale continued to tick boxes through into 2013. Like a number of others however, he wasn’t able to take that vital next step up and demand a recall before his contract expired and he was delisted at season’s end.

On departing from Princes Park, Dale was contracted by SANFL club South Adelaide for the 2014 season.