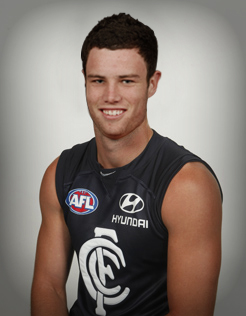 
Carlton recruited Pat McCarthy from South Australian club Glenelg at selection 34 in the 2010 National Draft. A tall, rangy defender capable of pinch-hitting in the forward line, he had earned All-Australian honours at Under-18 level in 2010, and was admired for his clean use of the football.

After a string of consistent efforts with the Northern Blues, McCarthy was named as an emergency for Carlton’s journey to the Gold Coast for round 22, 2012, and made his senior debut the following week, in the last game of Carlton’s season against St Kilda at Docklands.

Wearing the guernsey number 24, Pat came off the interchange bench to gather 10 possessions and five marks in a solid start to his career. Despite that promising debut however, he couldn't gain another opportunity to play senior football with Carlton, and after an injury-plagued season in 2013 was told that his contract would not be renewed.

In 2014, McCarthy returned to SANFL football with Glenelg, where he was coached by another former Blue in Nick Stevens.